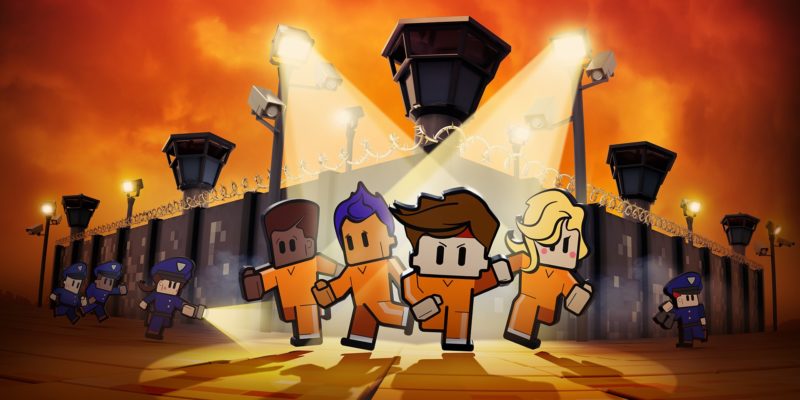 We’re always told to improve relationships with our co-workers. But not all of us want to go bowling after work or spend our weekends at some company-organized gathering. What we do typically like to do in our spare time is play PC games. Fortunately, playing PC games and working better with our colleagues aren’t mutually exclusive. Skills in PC games are also skills needed for improving our work and working relationships, so it makes sense to give it a try if you’re getting to know your co-workers better.

To help get you started, we’ve put together this list of the best PC games you can play with your co-workers. Most of these are easy to find on Steam, and better yet, you can stay at home to play them all. 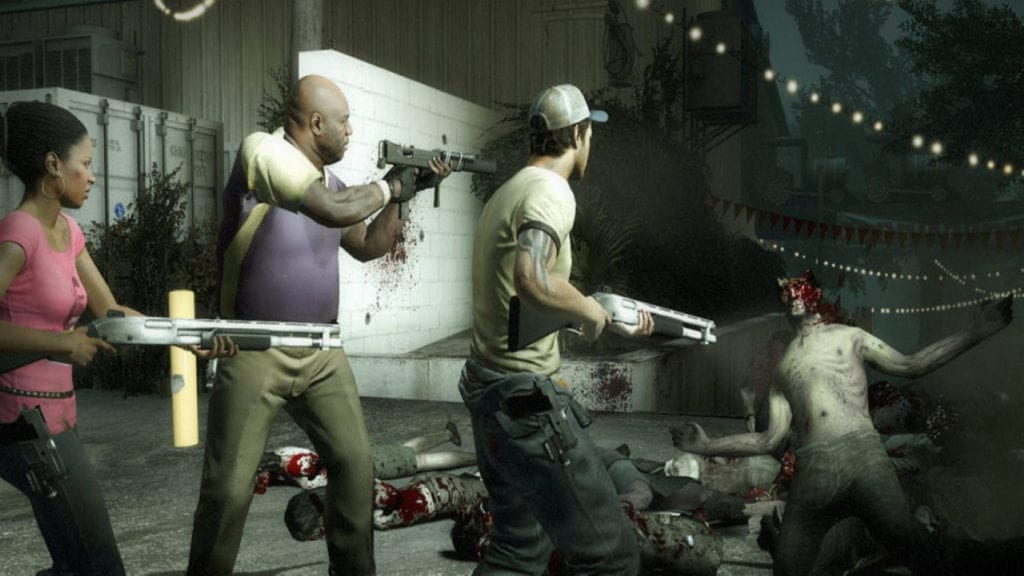 Left 4 Dead 2 is one of the most popular cooperative titles, building on a predecessor that defined the genre of co-op games. The secret to improving your bonds with co-workers is everyone working together to achieve a mutual goal, with no man left behind. Left 4 Dead 2 just so happens to be built around this simple yet efficient idea.

If co-workers are able to coordinate their way through hordes of zombies, supporting each other on the way, there’s no reason why they can’t use these skills back in the office as well. 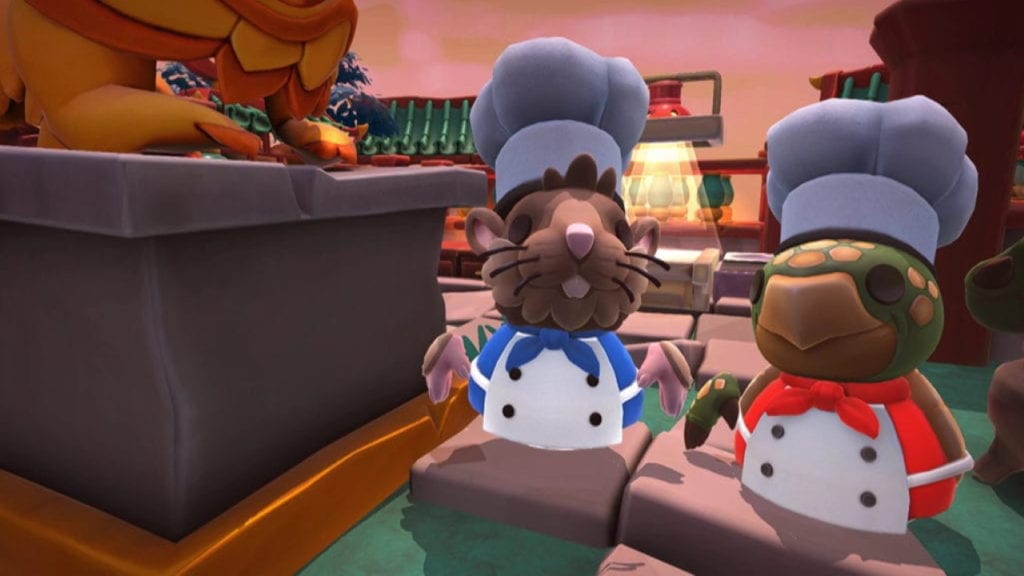 Overcooked! 2 is responsible for ruined friendships because of its unforgiving gameplay. We admit that. However, Overcooked! 2‘s stressful attributes are what make it one of the best PC games to play with your co-workers. If a group of colleagues can overcome all these challenges, their bond will become unbreakable — or a lot stronger, at the very least.

Players need to work together in a cartoon-ish kitchen to cook requested meals in time, and accurate division of responsibilities is crucial for achieving a high score. Such an experience will undoubtedly help improve delegation and dividing tasks among a group of employees, all without even taking part in a training course. 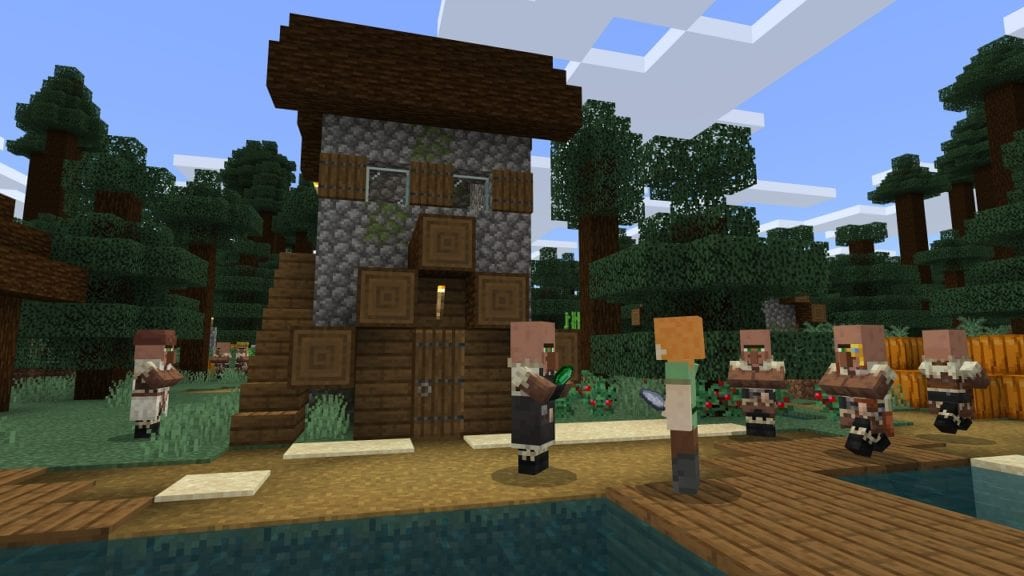 Almost everyone’s heard of Minecraft — we certainly like it. It’s fun to build and explore in its voxel universe, but it’s also a potential learning opportunity. Minecraft is what you make it. If you want to build a blocky empire and reign over silly little villagers, you can do that. Or you can test your survival skills against the harsh and unforgiving wilderness. Whatever you do, you can do it with your co-workers as well.

Minecraft’s open nature and foundation on creativity means it’s ideal for playing with others. You’ll learn how their imaginations work and how your ideas can all fit together, all without the hassle of supervision. More importantly, you’ll have fun doing it. If base Minecraft isn’t your thing, you can all just hop on one of the countless servers out there to make your own game. 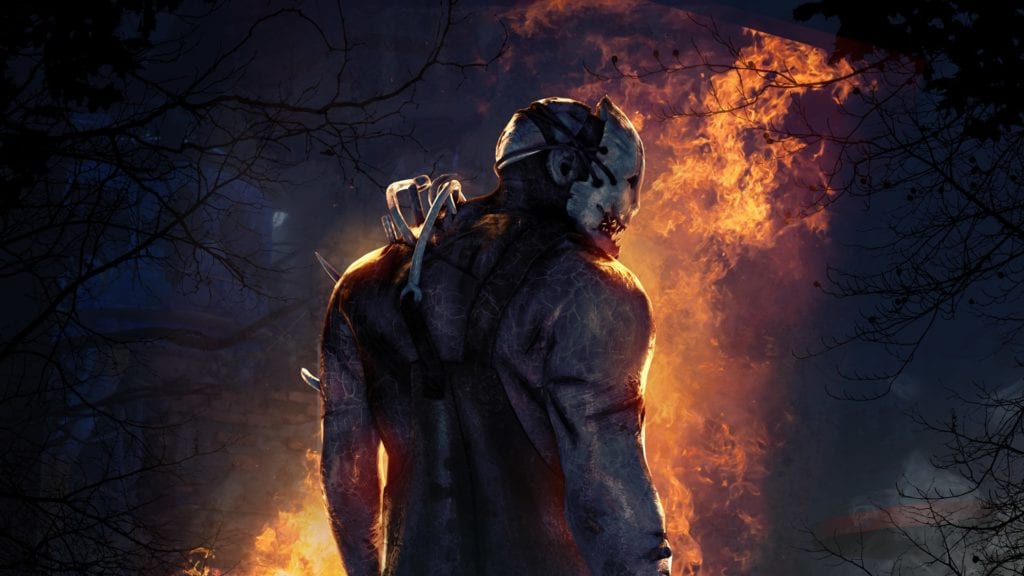 Dead by Daylight relies on asymmetric mechanics, with four survivors competing against a lone, yet deadly maniac. While fighting together against the hostile environment is a great example of cooperation, having uneven rival teams can be even more helpful for improving relationships between co-workers.

Players on the survivors’ team take different roles in a collective attempt to escape an area. At the same time, a single player who’s controlling the maniac tries to stop them. Dead by Daylight encourages quick thinking and teamwork based on everyone using their inherent strengths to overcome challenges. It’s not hard to see why we think it’s among the best PC games to play with your co-workers. It’s a great way to get an idea of everyone’s abilities and learn how to use them so everyone benefits.

Warhammer: Vermintide 2 — Understanding where you fit 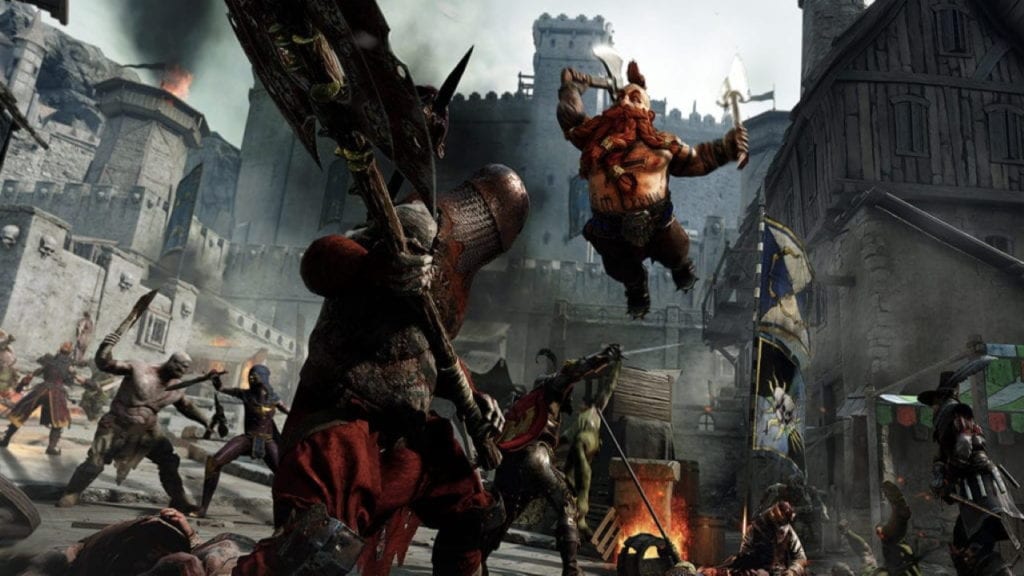 Warhammer: Vermintide 2 is a popular co-op game building on ideas introduced by Left 4 Dead. The game utilizes similar mechanics, but emphasizes class-specific abilities that suit various playstyles. While the ultimate goal of fighting through hordes of enemies is fairly the same, the execution differs a lot.

Vermintide 2 promotes teamwork like all these titles do. But, with several unique characters to choose from, it also lets players pick the roles they feel most attached to. This helps players get a feel for what they do best and how it complements their teammates’ strengths, which can take a lot of the stress out of team building at work. 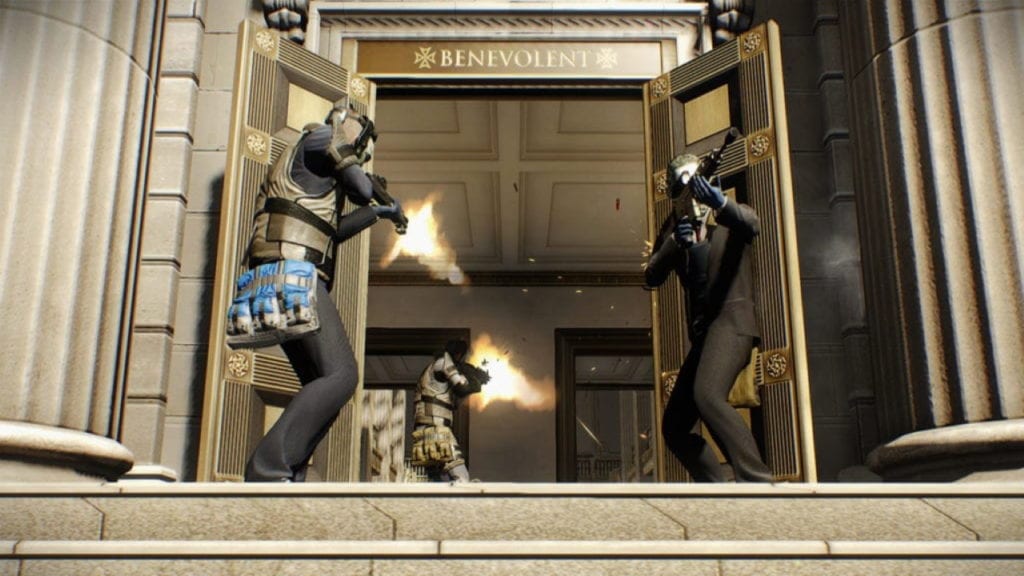 You’d be forgiven if you thought Payday 2 wasn’t a game you should play with co-workers. Teams of four players take on audacious heists and robberies to bring home as much illegal cash as they can. The crew fights dozens of heavily armed cops along the way, as well. Now, the goal in real life is typically not to break laws because that’s bad.

But in this case, the thrill of being naughty can help break down barriers between co-workers; it’s all something new and exciting they’ve never done before, and they’re doing it together. Moreover, Payday 2 requires careful planning, thoughtful teamwork, and skillful cooperation to pull the heists off. You’re being bad, and it’s actually a good thing — trust us. Many companies would like to see these traits in their workforce, so Payday 2 is definitely one of the best PC games to play with your co-workers.

Don’t Starve Together — Adapt to survive 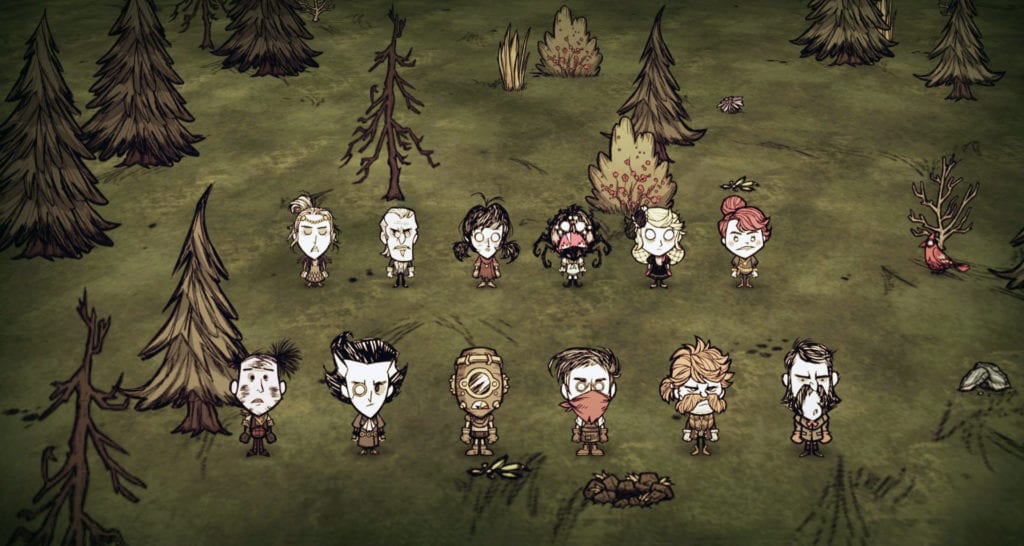 While fighting together against a common threat in video games helps build and develop teamwork, surviving together is even better at it. Don’t Starve Together has become one of the best cooperative survival games on Steam, and it’s all about surviving.

The title puts constant pressure on players. Scarce resources, haunting enemies, and a never-ending search for food and shelter force survivors to find new ways to stay alive. Don’t Starve Together is a very stressful game, and what makes it even more complicated is the absence of clear rules and guidelines. Players have to learn what’s best through trial and error, making Don’t Starve Together a great learning tool both individually and for co-workers.

Raft — Cutting out the non-essentials 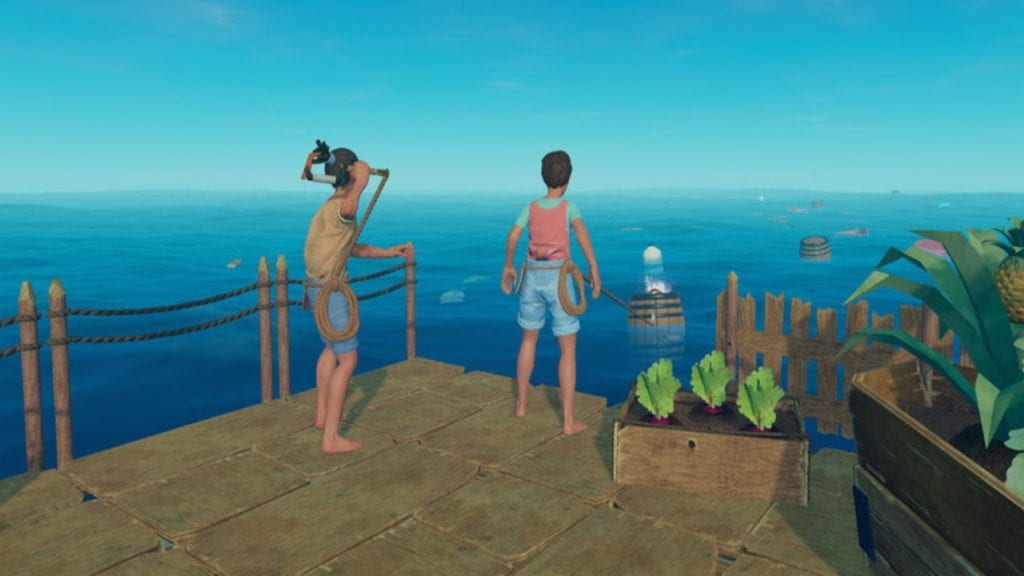 Raft, another survival game, is more of a meditative experience with calming aquatic environments and peaceful scenery. However, players realize very soon that they have to work hard to stay afloat on a raft. Not only is it just a small raft, but it’s drifting across the ocean with sharks lurking around.

Collective efforts come down to gathering resources and crafting new survival equipment. You’ll need to raid abandoned boats and rafts, and perform constant vessel maintenance as well. Players learn the most efficient ways of interacting and supporting each other, and a no-nonsense approach like this is perfect fuel for improving relationships with co-workers. 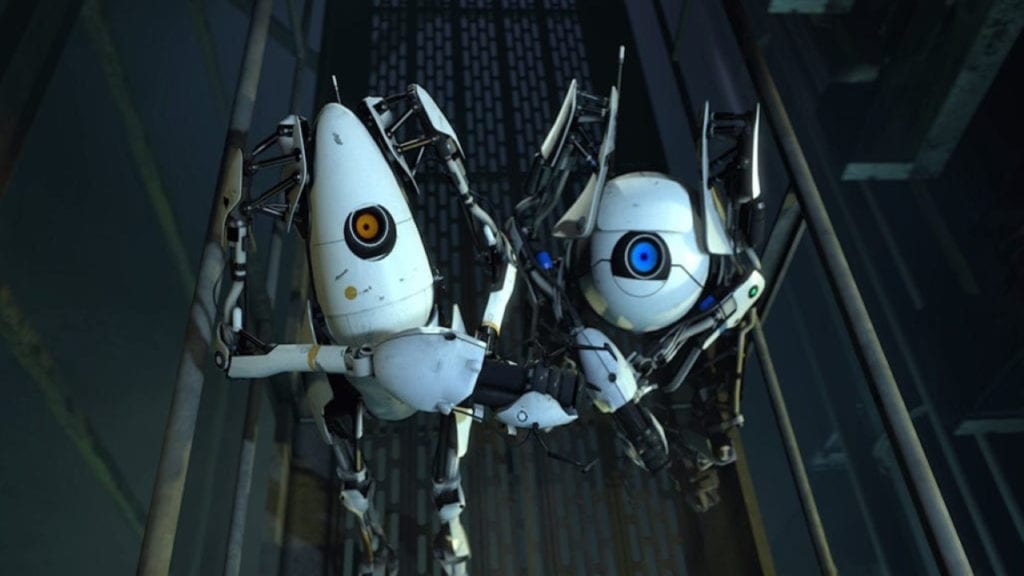 Portal 2 offers unrivaled levels of interaction. The base single-player campaign is fantastic, but the co-op portion opens endless opportunities to learn and improve quick thinking and spatial awareness skills. It often puts players in situations when they have to rely on each other to progress further, and constant cooperation is the only way to beat Portal 2.

It’s a different sort of team-building exercise, one that encourages asking for help and admitting when someone can’t do it all on their own. Inviting a couple of co-workers to play this exceptional title will most definitely result in improved relations and break down barriers. 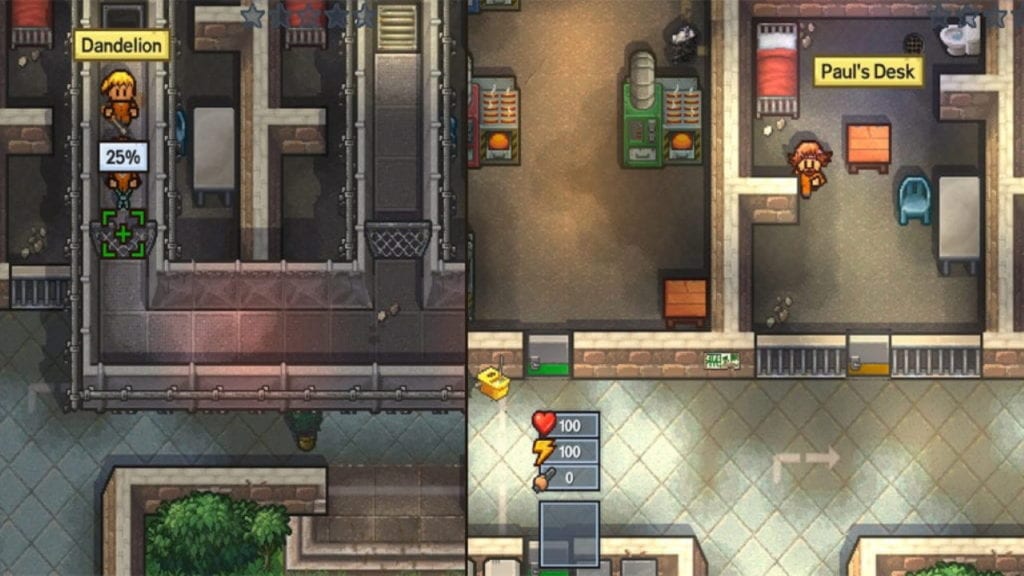 Getting to know your co-workers is a lot easier — and more likely to be successful — when it’s also fun. The Escapists 2 might sound a bit dark, as the goal is escaping a high-security prison. In reality, though, the game really has nothing to do with The Shawshank Redemption. Instead, The Escapists 2 offers a silly and cartoonish approach to teamwork, with retro-style graphics and a bevy of hilarious and unexpected moments.

Underneath that, you’ll find thoughtful mechanics you must exploit to escape the facility. Co-op activities encourage multilayered escape plans with different roles, distracting maneuvers, and mutual support. It’s that high-level planning that makes The Escapists 2 ideal as one of the best PC games to play with your co-workers.

Although the projects listed above are some of the best PC games with the potential to improve employees’ morale and working atmosphere, there are many more titles on the market to fit the task. What games do you think you could use to improve your bonds with co-workers?

By A.K Rahming21 hours ago
Features