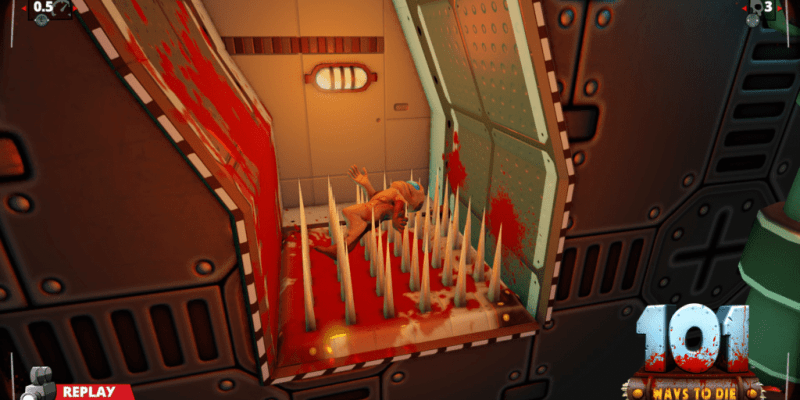 101 Ways to Die is a sick sounding game which invites players to deliberately kill lab-created creatures in weird ways. Don’t worry though, it’s all in the name of scientific research. That makes it okay, right?

The game is being developed by Four Door Lemon and follows Professor Ernst Splattunfuder who is researching 101 different ways to kill stuff. Splattunfuder completed his research but he somehow gets caught in a terrible accident in his weird underground lab which destroyed his “101 Ways to Die” book. Unfortunate, as this was to be his legacy and gift to the scientific community.

The thought of carrying out all that research again without help is too much for the Professor to cope with, so he’s drafting in help. That’s where you come in.

Splattunfuder has been using creatures called Splatts , created in his lab, to carry out his testing. Players need to kill the Splatts by taking them through different level scenarios and using various tools to get the job done.

It sounds horrendous, and it is. But remember: it’s all being done in the name of science.

The game is split into levels of increasing difficulty, and each map has entry and exit points (there can be multiple on an a level) for the Splatts. Prior to a level starting, the player has to decide where to place the traps and gadgets available to them and think about how the unsuspecting shambling creatures are going to move across the level toward the exit. They must be stopped!

It sounds pretty straightforward, but the Splatts are no dummies (they’ve probably figured out their role as scientific guinea pigs). They can avoid objects already placed in the level (spike traps and the like) by hopping over them, they are easily scared and run from danger, and they can sometimes bump into each other. That latter characteristic isn’t so smart, but may still mess with your plans.

The player needs to make sure the Splatt’s actions are carefully preempted by catching them out and either dropping them or propelling them into any object that can kill them. Science can be cruel. In fact, you have to wonder if this research is really being officially sanctioned.

As the levels progress the challenges, naturally, get harder. Understanding the physics behind each action becomes essential as traps eventually need to be chained together in order to kill the Splatts in more spectacular ways. Traps and other devices of death can also trigger each other. This can either be extremely helpful or a dreadful hindrance, depending on where they’re placed.

I’ve had a few moments of stupidity spoil some carefully laid plans, all because I’d not realised that a bomb blast would trigger something else.

Some of the traps require further input from the player once the Splatts are released into the level, which means timing is of the utmost importance. Placed objects such as bombs require time to detonate, so they need to be triggered as the Splatts get close. It’s also important to remember that this is a physics based game. Players need to be aware that bombs and other round objects have tendency to roll down slopes, ending up in the completely wrong place to take out the Splatts. Gravity is very much a thing in this game.

Assuming the traps and objects are placed to satisfaction, a simple press of a button will unleash the Splatts into the level. They don’t move particularly fast, so there’s a little time to think about when to trigger objects and traps at exactly the right time to cause maximum carnage to any hapless Splatt in their path.

Worth noting here that there is an option to speed the time up once a level is triggered and the Splatts begin to move through it. This means that if a player is particularly good at the game the levels can be zipped through in the early stages.

101 Ways to Die is a quite sinister, but at the same time oddly charming, game. Think of it as a reverse Lemmings. You don’t want the Splatts to make it off the level because some sick twisted old bloke wants to find out how many different ways he can kill them. The heartbreaking part is that the Splatts are actually quite cute.

101 Ways to Die will be coming to the PC in late March (the version we’ve been testing is a pre-release build). There’s still development work to be done, but it’s a game sick-minded puzzle fans might enjoy.