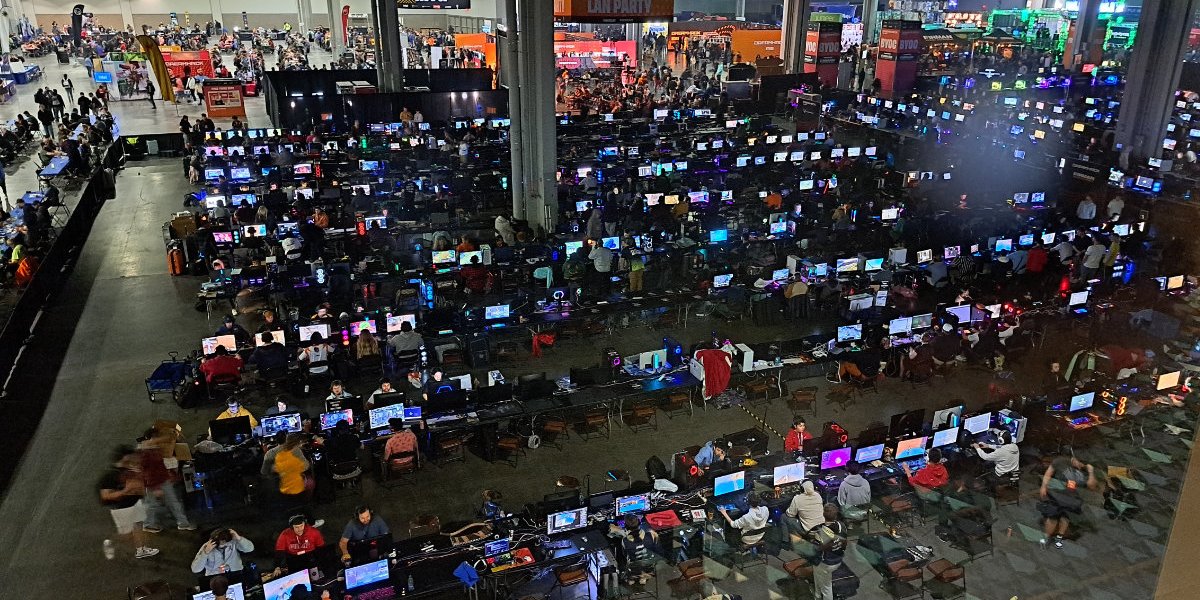 The global event that unfolded in late 2019 and through 2020 understandably put an end to all public events for quite some time. Portions of the world are slowly moving on from staying at home and avoiding social gatherings though, getting back to at least some normality. As someone who loves uniting with fellow geeks and gamers, I, for one, was thrilled to get out and finally do so again. It was a blast, and I now have every intention of attending more gaming events in 2023.

The show that reignited my excitement for IRL gaming events was DreamHack Atlanta 2022. This is undoubtedly the biggest recurring gaming event around me, and one I’ve attended multiple times now. DreamHack is a pretty big brand as far as gaming events go, so you may be familiar with it already. It offers live esports and card game tournaments, a LAN space to bring your own gaming PC, demo booths for all kinds of things like racing setups and VR, gaming celebrity meet-and-greets, cosplay, and vendor booths among other things. It’s a lot, usually packed into a single weekend.

Prior to the pandemic, people showed up by the thousands each year. Going into the 2022 event, I had cautious expectations; I predicted a much smaller showing. You can imagine my surprise then when I arrived to find a popping event. Perhaps not as packed as previous years, but it was still very much alive. And despite years of cancellations, it was just as I remembered. Now being a tech nerd and writer, I had a different plan from my previous attendances as a regular guest. I was out to meet people, make connections, and get hands-on time with whatever I could. Fortunately for me, that’s exactly what happened.

The opportunity to get hands on with Intel Arc graphics was a highlight, because there’s still a lot of skepticism out there regarding there regarding stability and performance. Intel had open booths with multiple games available to demo. I tested CS:GO, Ghostwire: Tokyo, Apex Legends, Elden Ring, plus several more titles and didn’t encounter any strange visual bugs or technical issues. Now that should obviously be the case with Intel’s own test systems, but it was reassuring to see A770s outputting 1080p 144Hz gameplay on high settings in some of today’s popular games.

I also spent a good bit of time speaking to the Arc team about the products and future plans, and left feeling far more optimistic about Intel graphics than expected when I first showed up.

The other major highlight was surprisingly personal and rewarding. What’s great about big events like these is that you never know what’s going to happen, especially if you put yourself out there and talk to people. System builder CLX was the sponsor for DreamHack’s open play section, where anyone can walk up and enjoy some games. We actually reviewed a custom-built gaming PC from CLX last year, and I had correspondences with CLX throughout the process.

Perhaps it was fate, but I ran into the very person tasked with gathering feedback for things to improve on and responding to my review. The chance to meet them and the rest of the CLX team led to interesting hardware discussions and some fairly nerdy talk about Destiny 2 gameplay balancing. It showed there were some seriously knowledgeable and open-minded people working there that were also committed gamers.

You can run into anyone and make your own plans

Aside from these things, I was able to try out hardware and peripherals in person, provide appreciated feedback to companies, and meet new people with common interests. DreamHack Atlanta 2022 was very much a professional venture for me. But the previous attendances at DreamHack and even E3 included meetups with online friends, watching huge upsets in esports tournaments, and even meeting famous people in the industry. Aside from the folks from various companies at DreamHack, I also had the chance to meet Dr. Lupo. At E3, I had the pleasure of meeting Jack Black, Hideo Kojima, and IGN’s Ryan McCaffrey.

There’s really no substitute for getting out to live events, and my recent experience felt long overdue pretty much the moment I walked in the door on day one. The challenge for organizers going forward into 2023 will undoubtedly be in changing more perceptions to believe we can safely do live gaming events again.

In fact, it came as a surprise to me that DreamHack Atlanta 2022 actually happened. There have been so many cancellations of live events over the past couple years, that it almost became the norm to hear about shifts to digital expos. That finally seems to be changing, though. We had the chance to speak to the team members behind DreamHack regarding the challenges they faced with committing to live events once again. It definitely shines some light on how uncertain things still are regarding attendee confidence.

“There was an obvious challenge in that we didn’t know how behaviour around visiting live events would look like after the pandemic, both from a show design and operational standpoint,” said Shahin Zarrabi, VP of Strategy and Growth. “It was much harder to gauge interest in coming out to our festival until very late in the process. Ultimately, the community showed up. And they showed up big!”

Without the crowds, it simply won’t be possible for in-person events to return, but enough people seem to feel confident in showing up now to get the ball rolling again. Word of those great experiences will spread in time, but there’s still plenty of convincing that has yet to take place. It’s obviously safe and more convenient than ever to stay at home and enjoy online social experiences, but there’s no substitute for the unique experiences which come from live events. 2023 might just be the year for live gaming events to return, and big shows like E3, Comic-Con, GDC, PAX, TwitchCon, DreamHack, and more seem poised for a return this year.

By Janzel Sandejas6 days ago
Features

By Janzel Sandejas6 days ago
Features