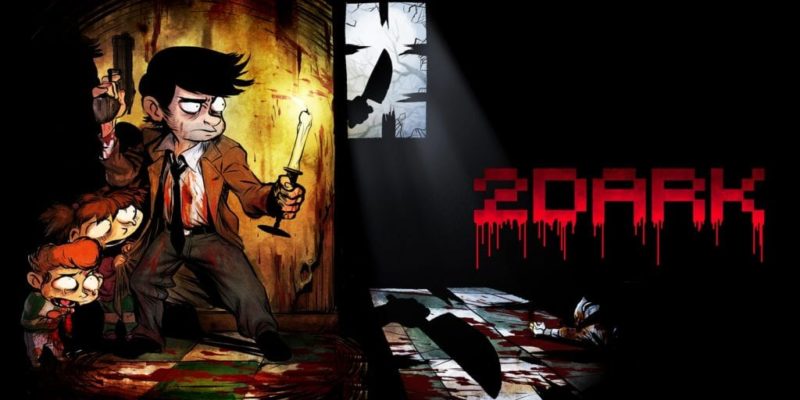 Dammit. I was all set to mock 2Dark‘s name. If there’s one thing I can make fun of, it’s a game name that has a number anywhere but the end (“will the sequel be 2Dark2 or 3Dark or 2Dark 2Furious or…” etc.) Unfortunately, the more I think about the name 2Dark, the more I think it might actually be a little bit clever.

There’s the obvious initial interpretation of “Too Dark” because it’s a horror game – but the name starts to make a bit more sense when you learn that this game is the headbaby of Frédérick Raynal, perhaps better known as He Who Did Alone in the Dark. I suspect it might well be named 2Dark partly as a nod to Raynal’s previous “Dark” game, and also because this time you are very much not alone: beating each level requires finding other people.

Despite the cartoon-y looks, the basic premise of 2Dark is a remarkably grim one. Our protagonist is a detective in the town of Gloomywood, and many years prior, his wife was murdered and his children abducted. Since then, he’s been on a vigilante crusade to track down those who are kidnapping and abusing children, and to rescue the kiddies before horrible things happen to them. This is not a pleasant game.

Few things scream “I don’t want to go in there” quite as much as an abandoned fairground.

It plays a little like a top-down version of Hitman, albeit one more focused on very particular solutions rather than devising your own. You need to sneak into a location where children are being held, make your way past any enemies in your way (via disguise, murder, or sneaking), and help the children reach the exit while gathering evidence. Although direct combat is a possibility, it’s rarely a good idea: enemies are as strong as you, may have better weapons, and if you decide to open fire with a gun then you’d better be prepared to attract a lot more attention.

Gameplay is binary and simple. If you’re in darkness, then you’re invisible; if you want to flick a switch, you walk into it; if you want to use a key on a door, you click the key to put it into your hand and then walk into the door. Need to reload your gun or replace the batteries in your flashlight? Click and drag. Noise and visibility are displayed directly on the screen, as is the audio range of enemies when you start getting close to them. As such, actually playing 2Dark is very simple – although things can still get a bit frantic if you haven’t been keeping track of where things are in your inventory. 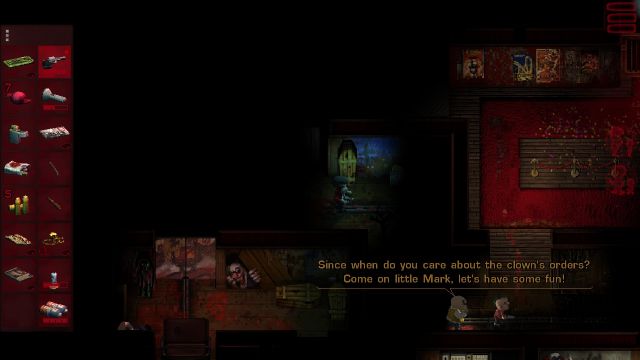 “Fun” in the sense of “let me lob knives at you for giggles.”

The preview build I played offers up two levels, which are markedly different in playstyle. The first has you heading into an abandoned fairground, because the former circus people appear to have been abducting children and selling them off to those who can afford them.

Surprising nobody, this level is incredibly creepy, because it’s a fucking abandoned fairground. It’s also a bit of a tutorial level, offering up fewer options as to how to proceed – but it’s also the sort of tutorial level that will beat you upside the head if you screw up. Most of the level is set within a spooky train ride area, but dilapidated tracks and holes in the ground can trigger instant death if you’re not watching where you’re going.

This is also where the game’s save mechanic starts to worry you. You can save at any time, but the way you do so is by smoking a cigarette… and this is often a bad idea. For one thing, this forces you to stand still for a few seconds while the protagonist lights up and takes a few puffs. For another, cigarettes cast light, and if you were hiding in the shadows before you sparked up, you won’t be while you’re smoking. 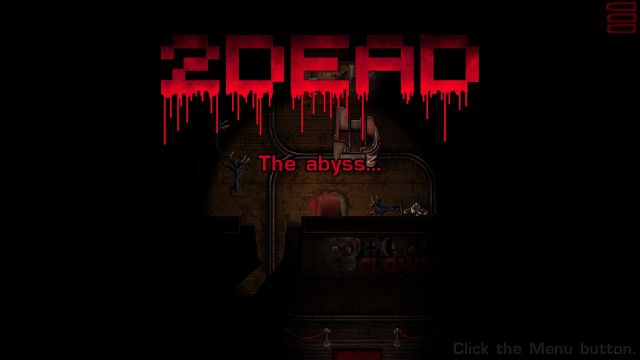 Note to self: when wandering an abandoned carnival, keep an eye on the floor.

Nonetheless, this level is a good introduction to the mechanics of how it all works. There are switches to press, patrolling carnies to avoid, a couple of people to club in the back of a head with a crowbar, and even a pseudo-boss fight. The puzzles here are generally simplistic: turn on a control panel to restore power, flick switches to open gates, and find keys to various doors. There’s plenty of optional stuff too, mind; you’ll need to find a crowbar to crack open crates that might contain ammo, batteries, or missing children.

The whole “children” thing probably bears more mention, because everybody hates escort missions and 2Dark is technically a big series of escort missions. Thankfully, it’s better than it sounds. Kiddywinks you’ve rescued trail in your footsteps exactly, so you can lead them through safe paths easily without having to account for wonky AI, and you can have them stop and stay in a safe area for as long as you like. If need be, you can also directly pick one of them up and carry them.

The downside is that they’re slower than you, and they’re also scared. They might stop following you if your path leads directly across a corpse, forcing you to come back and get them. They might say things or cry out, attracting attention. Guards appear to react differently to spotted children, too; while this happened after I was dead so I didn’t see too much of it, one guard seemed to grab a child and carry them back, while, uh, the circus lions just mauled them. Ahem. 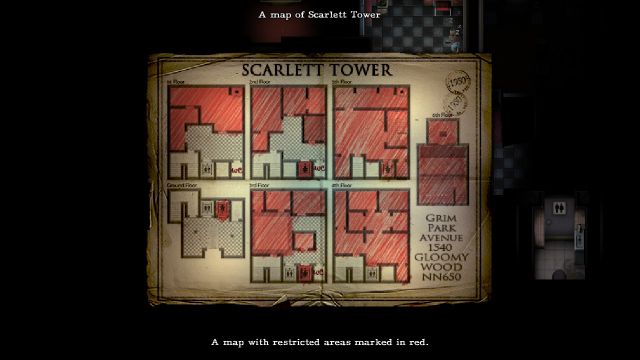 Thank you, thank you; a thousand times, thank you.

The second level of this demo build focused on a wealthy family to whom the psychotic circus clown was selling the children, and was a lot less creepy than the first by virtue of not being in a fucking abandoned fairground. This asked for infiltration of a heavily guarded tower block containing both armed guards and security cameras. Fortunately, said tower block was also looking for a new cleaner, so I made my way in by posing as such. As long as I had a mop and bucket equipped, nobody really looked twice at me in any of the non-restricted areas.

(Also, the game actually gave me a map indicating the areas that the cleaning staff were allowed into, for which I remain eternally grateful.)

This level reminded me a lot more of Hitman, both because of my foolproof disguise but also because of the bountiful possibilities. Yes, okay, I mostly made my way through by bludgeoning a bunch of people to death, but I never felt like I had to. I distracted one guard complaining about a lack of alcohol by placing a bottle of booze on his patrol route, leading him to sneak off for a quiet drink.

Then there’s a chef baking cakes for the evil heiress on the top floor, and I’m sure I can do something with this, maybe with one of my four rows of inventory items. Can I hide in the dumb waiter to make my way up there? Can I poison the cake? Can I use the mop and bucket for anything other than a disguise? Not sure, but I suspect things like this might be quite important if I go for a no-kills run. You know, rather than tripping a circuit breaker and then hitting people with a crowbar. I’m still not sure if no-kills changes the story any, or just some of the incidental dialogue between missions, but I aim to find out. 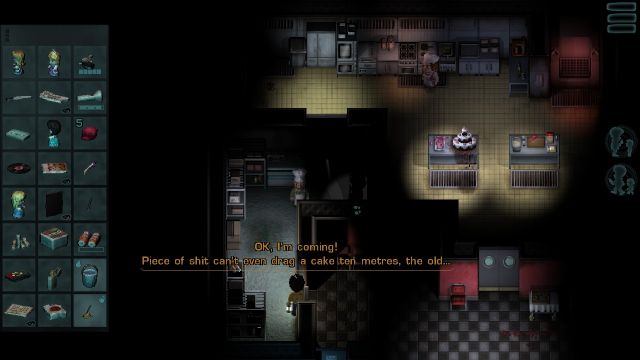 A blue interface indicates that you’re hidden, and the blue footsteps show your location in the dark. Not that being in the shadows is always helpful, as plenty of people carry lanterns or flashlights…

Frustrating though some rooms are – particularly if you haven’t risked a save in a little while – planning something out and pulling it off is as satisfying as it should be. One room containing three gun-toting guards took me far too long to accomplish, and was eventually solved lurking in the dark to kill one, distracting a second with a thrown candy (which can also be lobbed at kids to speed them up or attract their attention, or hurled at switches to trigger them), and then sneaking up behind the third with a knife. But good grief it felt good to get it right, and if the variety of levels and possibilities therein remain strong, then 2Dark could be onto something.

But for all that I like it, there are three distinct problems I want to bring up. The first is a minor mechanical one: while most things feel natural and simple, lobbing sweets as a distraction is anything but. The pseudo-3D perspective makes it really hard to judge if you’re behind cover or not, so you’re not quite sure if lobbing a sweet at a distant wall will actually hit that wall, or if it’ll smack into the cover in front of you. Some sort of indicator as to where it’s actually being aimed would be nice.

For a simple-looking game, the lighting is incredibly good.

Secondly, there are a few too many bits of aimless wandering. This might be because I’m a giant thicky, but searching for a key on the first level had me spend five minutes wandering areas I’d already cleared because I hadn’t bumped into the table containing it. I’m… not sure how that could be solved, but key hunting has never been particularly fun. Goes with the territory, perhaps, because even Hitman suffers this.

The third problem is arguably the biggest and most worrying, and that’s the subject matter. This isn’t necessarily a problem, but there are few taboos quite as big as child kidnapping/abuse/murder, and it’s ground that needs to be stepped on very carefully. Despite the cartoony looks, this is a really gruesome game (I’m not going to tell you what the heiress is doing with the children, for instance) and not in the dark-but-cartoony manner of something like The Count Lucanor or Knock-Knock but in a genuinely horrible way. Right now, I don’t know if the writing is strong enough to pull this off without feeling exploitative. My biggest worry, in short, is that 2Dark may indeed be too dark.

Bretonnia ride out in Total War: Warhammer on 28 February