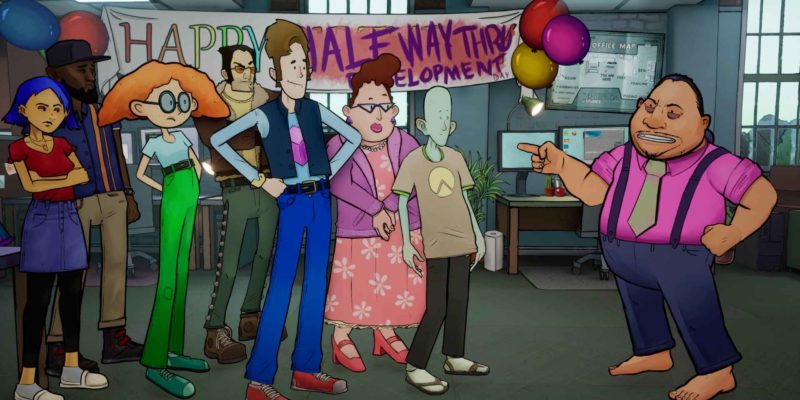 The five-episode first season of 3 out of 10 injects a little humor into the video game industry by lampooning its different aspects. Described as an ongoing experiment in game development by Mothergunship creator Terrible Posture, the season is comprised mainly of eclectic mini-games separated by cut-scenes. The whole package is styled after cartoon sitcoms, with each weekly episode averaging about 30 minutes. Best of all, Season One is available for free on the Epic Games Store, providing an extra incentive for players to enjoy a few laughs.

In 3 out of 10, you play mostly as Midge, who is practically thrust into the role of animator for a terrible game developer called Shovelworks Studios. As it turns out, this company has never released a game that scored higher than 3 out of 10 among critics and audiences. And its motley staff seem content to keep it that way. For instance, the day Midge arrives, the studio is working on a 2D game called Surfing with Sharks, in which you play as a surfer who has to dodge obstacles and sharks until he suddenly crashes onto the shore. According to the lead game designer, it’s an endless runner with a twist: it has an end. 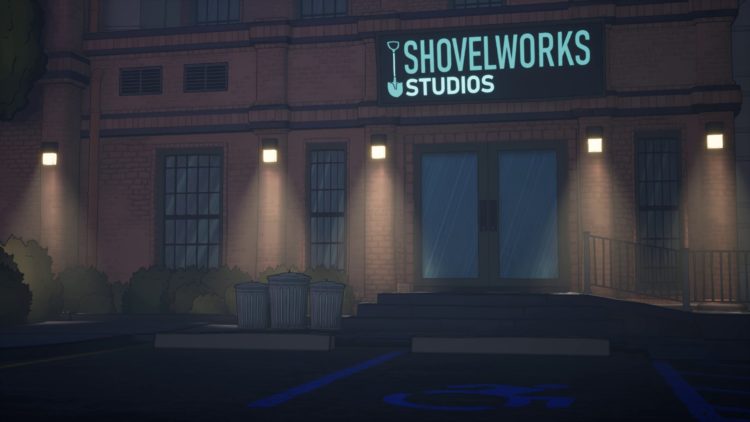 The game includes an interesting cast of characters. You have a studio head who doesn’t appear to know much about his staff or making games, a robot assistant that can’t help with anything, an artist with violent tendencies, and more. Although you play mostly as Midge, some episodes let you switch to different characters to make strong use of the ensemble. All the while, there’s a subplot about how there’s something darker involved with the studio. In fact, the studio needs a new animator because the previous one spontaneously combusted. Then there are the boxed-up interns in the supply closet, literally shadowy engineers roaming the basement, and a corporation with umbrella-carrying agents blackmailing Midge into staying at the studio.

Having fun with gaming

Terrible Posture Games creative director Joe Mirabello should know a little about dysfunction game studios. He once worked at 38 Studios, the company that famously shuttered in 2012 due to financial mismanagement. So, how much of this game is catharsis is anyone’s guess. Still, none of the humor feels mean spirited. Instead, it lightheartedly pokes fun at different aspects of the gaming industry, including dealing with angry fans, battling through an office battle royale, and suddenly experiencing insane character glitches. 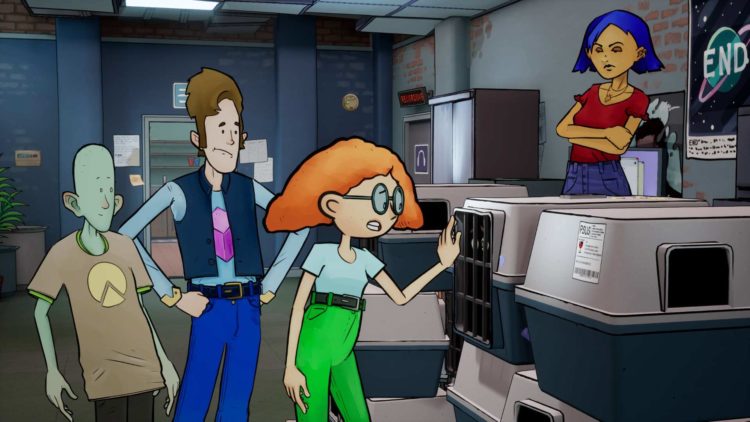 With that being said, there are a few things to get out of the way. Unlike many other episodic adventure games, chief among them being ones created by Telltale Games, the episodes aren’t linked together by player choice. Instead, they play out much like a television show. Events that happen in previous episodes, like a fire or changes to the ever-evolving Surfing with Sharks project, carry over into subsequent ones. You don’t have any influence over it. There are no dialogue trees, no consequential decisions, and no means of affecting how each episode starts or finishes.

That does make for a linear experience, but 3 out of 10 manages to make it work – likely because of its lighthearted nature, short playtime, and sense of humor. It helps that the episodes are free, but I think that another big part of the fun is in the sheer variety of mini-games. The gameplay is borrowed or inspired by a variety of different genres. Each episode sports a unique feel as it focuses on new themes while taking you to different areas, including game development university and a superstore for stock art items. 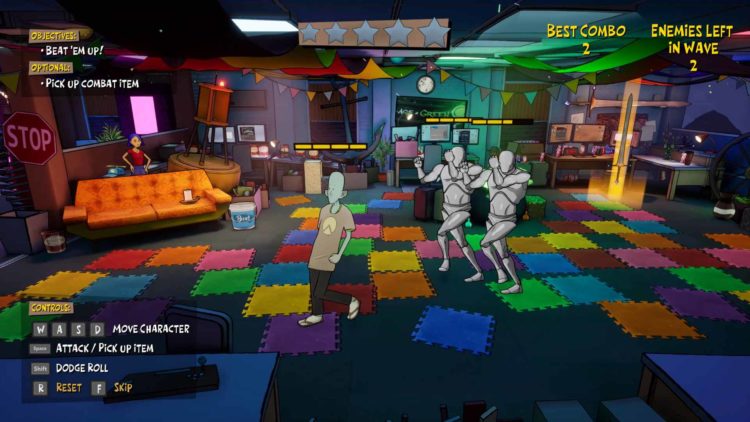 Games are usually tied to the episode’s theme. You either have to stealthily making your way through a level, drive through obstacles while keeping a stack of intern boxes from falling off your car’s roof, or perform pinball facial reconstruction. Other mini-games relate to moment-to-moment activities, including matching ingredients for a recipe, a sliding puzzle to get an intern out of storage, and defeating waves of killer robots by launching explosive interns at them.

These mini-games rarely repeat, and there’s a differentiating twist to them when they do. For example, there are two versions of the sliding puzzle game. In one, Midge needs to solve it herself. In another episode, two characters need to work together to solve it. Although that may sound like a minor difference, it’s enough to keep things interesting. Oftentimes, the sheer diversity can make it feel like you’re getting several games out of the otherwise straightforward adventure experience.

Each episode takes about 30 minutes to play and all the mini-games are skippable. You’ll never get stuck, and the pacing always stays more or less consistent. Doing well earns you stars for joke leaderboard ranking that doubles as the developer credits. The dialogue and cut scenes can be skipped, too. Taken together, 3 out of 10 becomes a super low-stress experience that you can quickly play before getting back to other games. 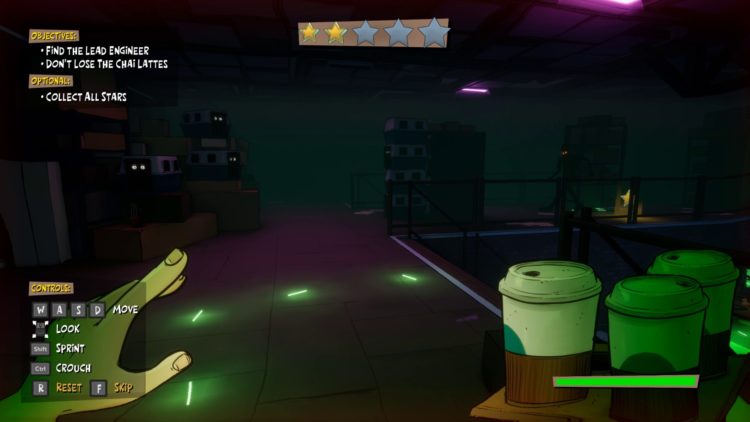 However, this casual approach also means that there’s practically no reason to revisit the episodes once you’re done. I felt no need to rewind to previous scenes or replay skipped puzzles for better scores. The problem with having no consequences for low scores is that there isn’t much incentive to do better. Although that plays well with the casual nature of the game, the entire 5-episode season ended before I knew it.

Another issue is with the ongoing subplot that hints to a dark mystery happening around the studio. While the subplot ties the episodes together, it doesn’t build up to a satisfying conclusion by the end of the season. Small hints are dropped in each episode, such as the organization that is a not-so-subtle reference to the Umbrella Corporation attempting to avert some sort of catastrophe that will occur if Shovelworks ever produces a good game. Then there is the strange sabotage that raises the projected score of Surfing with Sharks from three to four.

But instead of answering questions, the finale introduces new ones before ending abruptly with a cliffhanger teaser for Season Two. This failure to build up to a big conclusion undermines the season by making it feel like the narrative has been spinning its wheels the whole time.

Although I can’t say that I had huge laugh-out-loud moments while playing 3 out of 10, I did chuckle at jokes, which works just as well for me. The game doesn’t pretend to be more than a quick, humorous distraction from more serious games. I appreciated these diversions, which helped lighten my mood each week. I also love how the game pokes fun at just about everything from achievements to hilariously piecemeal RPG armor. But the abrupt end of the premiere season was a huge letdown. However, it’s hard to be too mad, since, again, the episodes are available for free. In any case, it is far better than most games with a 3 out of 10 score in the title.

Given the first season’s quick release schedule, hopefully there won’t be too much of a wait for Season Two. While I look forward to another load of quirky mini-games and returning to the cast of crazy game developers, I also hope that the next season will have a more substantial ongoing story.

The first season 3 out of 10 ends too abruptly and introduces far more questions than it answers, but it is a welcome weekly dose of humor.