Following the recent release of the 3D Realms anthology on Steam, we had a chance to chat with Scott Miller – founder of what was Apogee and later became known as 3D Realms. You might remember them for publishing, and developing in some cases, a whole load of classic games throughout the 90s and beyond including Rise of the Triad, Duke Nukem, Terminal Velocity, Stargunner, Shadow Warrior, and so forth …

The interview is available in audio form (featuring intro music from Wacky Wheels) below, or you can read on for transcribed highlights.

PC Invasion: So, who are you Scott, and why will people know you?

Scott Miller: We were the ones that, sort of, invented the idea of releasing games online in episodic format. People would get the first episode for free and then send money and get the rest of it.

One of the first things I did back in 1990 was that I started recruiting other game developers to help out with what I was doing. I ended up recruiting some of the people that became ID software. We did a game called Commander Keen together, and then Wolfenstein. As each company grew we each hired more and more people. They went off to do their own thing with Doom, we went off and did Duke Nukem, Rise of the Triad, Max Payne….

You may recognise this chap.

PCI: It wasn’t just the business model, but the gameplay of those games which was has left such a legacy. Did you have some sort of design philosophy for the companies you worked with?

Scott Miller: When the company got started, the idea was to do arcade style games that people were seeing on console but not on PC. We were trying to do like Nintendo-style platformers and quick fix games. Games that were as graphically intensive as the PC can handle; in a way that’s what started the whole engine wars race. It was always about getting the best engine possible.

PCI: What sort of specific innovations can you remember?

Scott Miller: We had a real sense of fairness in games; we tried not to make things too hard.

We were one of the first companies to push the idea of having saves in every one of our games; and also the idea of removing lives from games. I remember working on a game where we had 3 lives; you’d get your three shots and then you’d die. I was like, “why are we letting people die here? The punishment should be you just haven’t made it to the next level.” So we eliminated the idea of lives and that caught on. It took ID about two games before they did that; that seemed a little risky for them. I think Wolfenstein had lives but by Doom they got rid of lives.

We had in our minds that we didn’t want to have games where people can’t finish the game. Let them at least be able to experience the whole thing. [Interviewer’s note: for context, at the time lots of games were almost impossibly, and certainly, unfairly difficult.]

PCI: Everyone remembers the big hitters like Duke Nukem, but I remember some of the lesser known classics like Wacky Wheels and they were great.

Scott Miller: That’s a case were those kinds of kart racers were on consoles and a team approached us with a demo, I think they were from England; a team of two people. It wasn’t happening on PC and we were like, “Ok, let’s make this on PC.” That was a pretty risky project because it had the dual player mode; it took about a year longer than we originally anticipated. 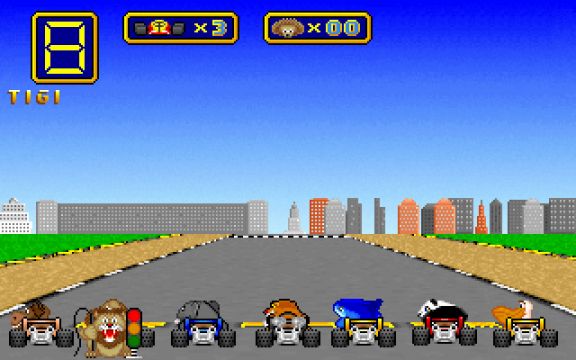 Not too sure how the shark is going to hold up in this race.

PCI: Which of these titles did you personally have most input on?

Scott Miller: One of the games were I had the most input was probably Max Payne back in 2001 where I was practically working with those guys daily. I felt like with that game a lot of the bigger ideas, like bullet time, came from me.

A lot of it came down to the fact that the team, Remedy, were just a great team to work with. The internet was making it easier to communicate; the channels were completely wide open between 3D realms and them.

That was probably my most enjoyable experience helping another team develop a game.

PCI: It seems that more and more game dev is moving into an office-less virtual environment. Is that what you’ve noticed?

Scott Miller: Back even in the 90s when we were getting started we had some virtual teams we were working with who were scattered to the four quarters of the world, but nowadays it’s even easier.

I work with some teams and we use secret Facebook groups to do some discussion, people seem to have that open all the time anyway. There’s so many ways to share information now that it makes that virtual team concept easier than it’s ever been.

That’s the model that [Rise of the Triad 2013 developers] Interceptor use, they have a team of about 50 people but there’s only about 7 or 8 people in the Denmark office. They manage their team with Skype and all these things. In lots of ways that’s a plus for the developers; they can work from home and work a little to their own hours and so on.

I think we’re going to see a lot more of this in the future. It’s almost like the movie model were people don’t necessarily work in a team, they work on a project and once that project’s over they jump to another one.

PCI: What sort of things are they up to right now?

Scott Miller: They recently made the reboot of Rise of the Triad, which turned out pretty well, especially with the budget they had. But right now they’re working on a new IP, an IP which I come up with in the 90s called Bombshell.

It actually came from watching an old movie with Pamela Anderson called Barbed Wire, you ever see that?

But she plays this character who’s in an apocalyptic future and she’s a badass and stuff. At the time the game’s industry only really had Lara Croft, so we wanted to design another female action hero and make her less adventure focused like Lara and more action focused. So she’s a demolition expert and she’s lost her arm.

We were making a game for her back in the 90s, but it didn’t really work out. Then we wanted to roll her into the Duke Nukem universe, and back at one of the original Duke Nukem Forever previews at E3 you actually see a female character and that was Bombshell. But we ended up taking her out of that.

So now she’s getting her own game, we’ve redesigned her and created a world and back-story around her. That’s going to be out in the second half of this year.

That’s one of these games that’s being made with about 40 of the people working on the project working remotely.

PCI: A lot of these games have just been released on Steam in their original state. Would you consider giving any of these titles a fresh coat of paint, like Gearbox did with Homeworld?

Scott Miller: Believe it or not, most of the code for those old games we can’t even find it. Even the original authors and teams, they just don’t have it. Back in those days no one had any idea that these games would survive for more than a few years. So it was never a priority to save the code, it just wasn’t part of our game plan.

PCI: What about reboots? That’s something you’ve been doing over the last few years.

Scott Miller: We do look at the old catalogue and ask which of the games might be good for a reboot. Shadow Warrior, for example, was recently rebooted.

Also there was a fan-based reboot for Wacky Wheels which just got greenlit on Steam. That was something we didn’t initiate ourselves, it was just some guys who came and said they were fans of the game. This was about two years ago and I gave it the thumbs up and we have an agreement in place and everything. With a game like that, if someone doesn’t come along and reboot it then it’s dead anyway, so you might as well let someone take a shot at it.

If people were to approach us for some of these other games, we’d probably give them the right to go ahead and reboot it also.

PCI: What will role will 3D Realms have going forward?

Scott Miller: After Bombshell is done, we’re going to try and get working with 3rd party authors like we did in the 90s. I’m pretty excited about that because the indie market is huge now and all these things like Kickstarter and early access. You can have a team with just 2 or 3 people that can make a really darn good game.

So 3D Realms in the future it’s going to start actively searching for these kinds of teams and see what we can bring to the party in terms of resources, art, developers – if they’re missing a few key people on their team. We want to find developers that are out there that have the talent but maybe don’t have the resources to bring their vision to the market.

By Jason Rodriguez1 hour ago
Interviews