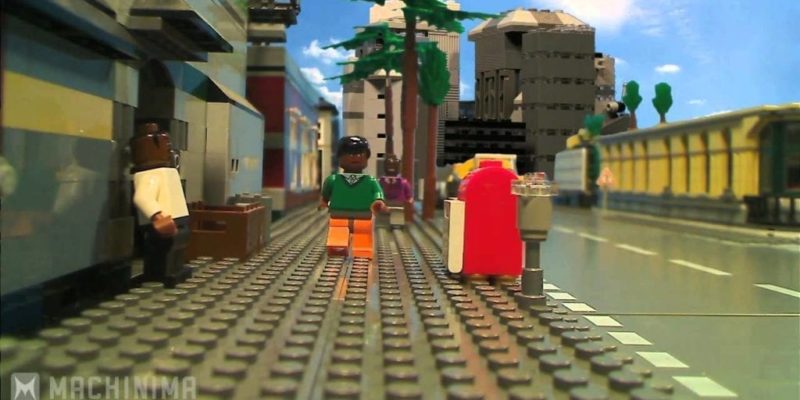 5 Games That Would Benefit From the LEGO treatment.

In 2005 a game, developed by Travellers Tales, called Lego Star Wars was released for the Xbox, PlayStation 2, Game Boy Advance, GameCube and PC. Unlike many of the Star Wars games of late, this one received massive critical acclaim at the time and has gone on to sell over ten million copies world wide. Since then Travellers Tales have developed and/or published numerous Lego games, all of which received great reviews. With the recent release of Lego: Lord of The Rings. I took a look at five games that would benefit from the Lego treatment.

Lets be honest, the COD franchise is getting stale. Sure, when Call of Duty: Modern Warfare was released it became one of the most acclaimed, not to mention bestselling, games of all time. With its edge of your seat story and addictive multiplayer it’s not hard to see why this is one game you simply must have in your 360/PS3 collection. However, since then the COD franchise has begun to wane and the release of a new COD game is generally greeted by a mild shrug by most of the gaming community who know it will never recapture the glory of Modern Warfare. Of course a new COD release still sells millions of copies by way of their loyal fans but I suspect that deep down in their heart of hearts these fans know that the glory days have passed. CODs decline can be attributed to number of issues that have cropped up since the days of Modern Warfare. The graphics, which both Infinity Ward and Treyarch claim to be improved in each release, still look so similar to 2007s Modern Warfare Graphics you can’t see any real difference. The latest games look almost historic next the beautiful vistas seen in the likes of Uncharted, Metal Gear Solid 4 and Red Dead Redemption. But graphics aren’t the only issue COD must deal with. Lawsuits between Activision and its employees regarding owed royalties, wrongful termination, and the rights to the COD franchise suggest all is not well in camp COD. There biggest mistake in my eyes however, is the fact the release a game every year. Initially the idea seems sound, after all they have both Infinity Ward and Treyarch working for them but, but as Shakespeare said: “there is too much of a good thing”. Like a spoilt child we gamers got a COD game once a year for the past five years, no wonder we’re bored. Clearly then the COD franchise could use a fresh coat of paint, something to make the next game stand out from its predecessors and, most importantly, something to get it out of the shadow of Modern Warfare. I present to you: Lego Call of Duty. Imagine being in a first person view seeing nothing of your character except his yellow hands firmly clicked onto his rifle. Imagine Lego characters coming apart when they’re hit by a grenade. Imagine the fun. Of course Activision could later go back to making more realistic COD games but a Lego game might be the breath of fresh air they need.

Unlike Activision, Rockstar games are playing every note perfectly when it comes to developing and releasing their games. They take their time to create huge open world cities that are every bit as realistic, alive and vibrant as the real cities they’re based on. As a result their games have been hugely successful and each new game is awaited with baited breath. The only information we’ve got about the next one comes in the form of a short trailer released in November last year and yet already the hype is massive. However, there is one little gripe fans have had about the more recent games, in particular GTA IV. I mean it’s just a tiny little hiccup, hardly worth mentioning really. I’m really going out my way to criticise but damn it all I’m going to. The GTA series, like the movies, has fallen in with this new trend of grittiness. Not necessarily a bad thing but many argue the crazy days of Vice City and San Andreas were the best. GTA IV bucked the crazy trend and opted for a more realistic story about an illegal immigrant trying to survive in the land of the free. Whilst GTA IV received massive critical acclaim it was noted that some of the fun had been sucked out.

So how do we inject a little fun back into GTA? Lego! The possibilities are endless here. You could design your own car using specific Lego bricks, when you fire a rocket at a building it could crumble into Lego pieces and you could collect studs to unlock new vehicles, characters and outfits for your little car thieving Lego man.

The Fable franchise has seen better days. Released in 2004 the first Fable was hyped beyond belief thanks mainly to Lionheads creator Peter Molyneux’s promises of features never before seen in gaming. Despite getting great reviews, gamers couldn’t help but notice a lot of Molyneux’s promised features were lacking. Since two more Fable games have been released and whilst still getting good reviews, they never quite lived up to the glory that was Fable. In fact they’ve just got worse. That’s not to say they’re bad but each one is a little worse than the one before. There’s a new Fable game being released exclusively on Kinect but if we know anything about Kinect it’s that no game actually works on it. However one of Fable’s best assets is that it doesn’t take itself too seriously. In a world packed full of gritty RPG’s like Fallout and Skyrim, it’s nice to know there’s always Fable for when you don’t feel like having the weight of a made up world on your shoulders. Fable is packed full of humour, funny achievement titles and sometimes even breaks the fourth wall. Whether it be your hero soiling his pants whilst trying to impress your lady friend or listening to a Demon Door ranting about how much he hates the current trends in fashion. This sort of humour would work perfectly with the Lego games franchise. Having a whole Lego world to explore would be ace and completing quests in return for gold would enable you to purchase new Lego weapons, clothes, houses and potions. Fable would get a much needed revamp and I think it would be right at home with Lego’s humour.

Prince of Persia: The Sands of Time was one of the best games on the Playstation 2. It proved that games could have a great story whilst also having great graphics and game play to boot. Whilst more recent Prince of Persia games haven’t quite recaptured the glory of Sand of Time they are still worthy of your time and money and are keeping the Prince of Persia franchise strong.

However, after more than five Prince of Persia games, gamers are beginning to get very familiar with the game play. This isn’t necessarily a bad thing. After all, why change a winning formula? However it might do the franchise some good to shake things up a bit. So why not have a Lego Prince of Persia? Obviously Lego makes anything a hundred times cooler (Star Wars for instance) but the rewind time mechanic is what would set it apart from other Lego games. Imagine breaking some Lego blocks apart, only to rewind time and see the blocks re build the structure they originally were. Having a Lego world to free run across would also be refreshing and having a little Lego prince begin a romance with a little Lego Farah would be the cutest thing since Sackboy.

[Editor’s Note: I discovered that there is actually a Prince of Persia lego series but it is modeled on the movie version of the Prince of Persia universe rather than on the video game portrayal.]

The Gears franchise is by no means in trouble. The franchise finished it’s original three game story with acclaim and style and with another Gears game announced, it’s clear that the franchise is yet to reach its peak. However it would be fair to say that Gears does take itself quite seriously. The original Gears was one of the first games to embrace the “gritty” genre games and cinema are now so into and it’s stuck with that theme throughout. Not that you can blame them. The game is about the attempted genocide of the human race at the hands of some fearsome looking aliens. However that’s not to say the game is completely humourless. Many of the achievement names are funny references from old movies or pop culture and in Gears of War 3 there were several massive and very funny Easter eggs (including a giant chicken). So it’s obvious developer Epic games have a sense of humour so why not give it the Lego treatment?

Combining the Lego humour with the Gears of War gore would create a Blood and Ice-cream genre game that has gamers laughing and wincing at the same time. Seeing a Lego mans head pop into a gore explosion would never get old and chain sawing a Lego object into pieces would be almost as satisfying as doing it for real. But, let us not forget that there are many impressive vehicles to be found in the Gears universe and Lego designers could really go to town when creating a Lego Silverback or Assault Derrick. Lego are also known for releasing real Lego toys of the games they’ve done so having one of those on your desk would be ace!

$83 million raised on Kickstarter for games in 2012