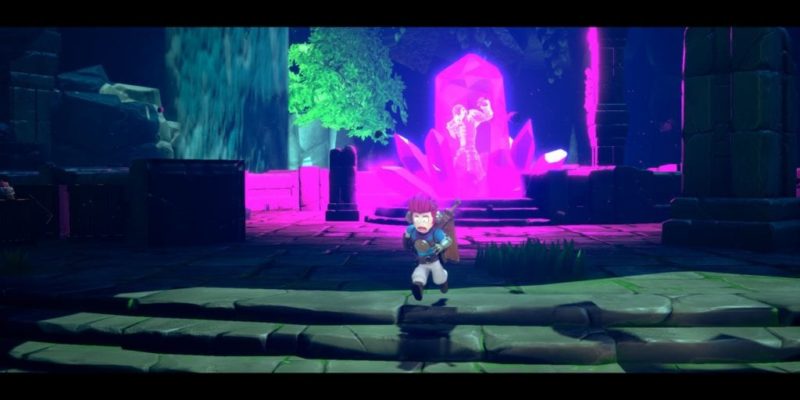 It’s never a good thing to be generic. Standing out in a sea of products is hard enough as it is, but doing so while being bland is just that much harder. However, that blandness won’t always sink something. If a product can make up for its shortcomings in other ways, it can still be a very worthwhile piece of entertainment. A Knight’s Quest is demonstrative of this.

I’m going to be as up-front as I can here. I really like A Knight’s Quest. It’s well-designed, has tight controls, humorous dialogue, and is fun to play. But my time with it was marred by some severe bugs that kept me from finishing. I got very far into the game, only for my entire save file to be wiped by a bug. So, if you’re going to buy this game, you’ve been warned. Back up your saves, and be prepared to see some crashes.

If my introductory paragraph didn’t quite beat that horse dead enough, yes, A Knight’s Quest is extremely generic. Even the name is soulless. The game looks and feels like countless other Zelda-inspired titles. The character models have very little personality and detail, and the world itself is totally set within the biomes you’d expect. Forests, fire areas, snow areas, deserts – they’re all accounted for, and they all look like they always look in these sorts of games. The enemies are almost all basic, cartoon skeletons, and you’ll fight them for most of the game. There are four of these, and they get pretty old. 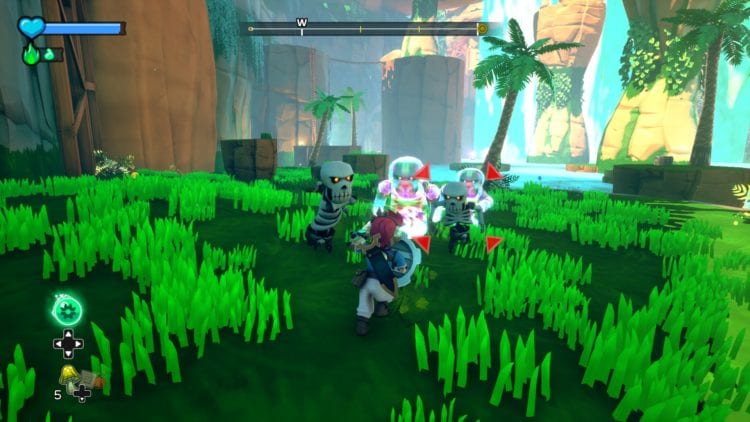 The narrative doesn’t fare any better. A Knight’s Quest tells the tale of Rusty, a cartoony guy who accidentally causes an evil being trapped in a crystal to be partially freed from his shackles. And, of course, he finds out he’s the chosen one who must wield elemental weapons acquired from dungeons to save the land from the encroaching darkness.

The setup is not only insanely familiar, I’d also call it lazy. But, astonishingly, A Knight’s Quest somehow uses this laziness to its advantage. The dialogue and general flow of events have this sly, self-aware understanding that the setup is trite, and it uses this as a crutch for its particular brand of humor. And this is a funny game. At one point, you get a pair of “Grind Boots”. The description you receive upon finding these muses that it sure is lucky that these boots are the exact right size for Rusty. I honestly found myself laughing at this game fairly often.

All in the design

My initial response to A Knight’s Quest was that it was underwhelming. The opening area is very dull, there isn’t much of interest going on, and the font used in the game’s text boxes made it appear to me that this was a low-effort, cheap knockoff of a game. However, as it progressed, I slowly realized that this wasn’t the case at all. 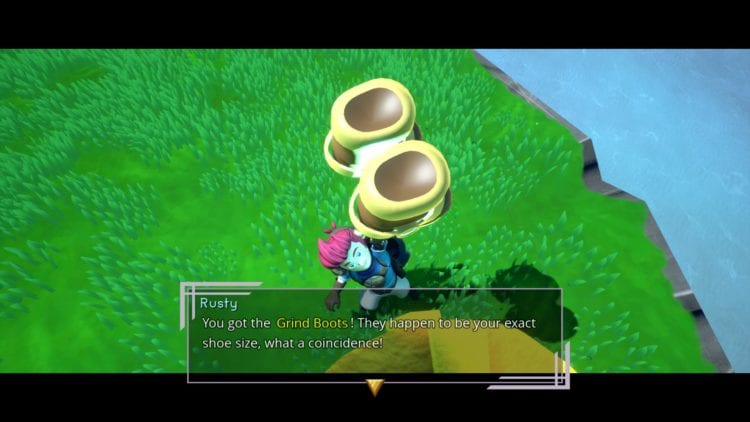 A Knight’s Quest is predominately an action-adventure game set in a large, interconnected world. It has some dungeons, but you’ll spend the majority of your time outside of these. I’d hesitate to describe it in terms of Zelda because it’s more akin to a typical Metroid-like game. As you explore and follow the plot, Rusty gains access to new weapons and abilities. These open up new routes and allow him to obtain items and the like that were previously out of reach.

At first, these are all tied to divine weapons you receive that have magic abilities. Each of these abilities aids in progression. The second, for instance, lets you throw a fireball that can burn up certain dried-up trees and melt ice. Later in the game, you receive three more abilities that also change what Rusty can interact with. Some of these are actually rather clever.

I can show you the world

A Knight’s Quest‘s level design is surprisingly good. It’s generally clear where to go, as the different areas are all memorable and feature intelligent signposting. The areas have two main collectible items: slimes and keys. You find these fairly often, and they’re used to upgrade your inventory space or open chests in a certain location. I couldn’t actually find where to do either of these, however. They may very well appear at a point after where my save bugged, or I may have just missed them.

It’s worth mentioning that most of the loot you find in chests is random, though, and much of it isn’t all that useful. That makes hunting for chests less of a draw than in similar games. 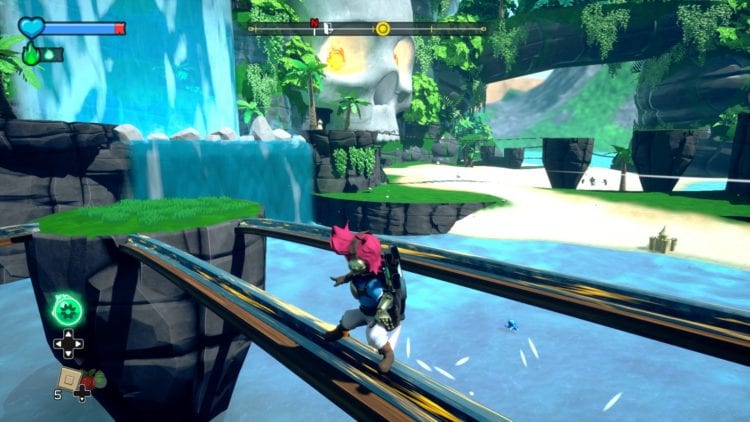 That aside, the gameplay goes well with the world. Rusty has access to a regular suite of abilities and options. He can jump, grab onto ledges, and dodge roll. These are all very responsive. The platforming, in particular, is pretty excellent. A Knight’s Quest actually reminded me of collect-a-thon platformers in this regard. Sometimes jumps can be really difficult, though. A couple of them frustrated me to a very large degree, but most of the game’s jumps are fine.

Skeletons in the closet

The combat, however, does leave something to be desired. It’s adequate. Nothing more, nothing less. There’s no impact on hitting enemies. You just pummel them until they die. The three main weapons are alright, but the fighting just serves a means to an end. Fighting individual foes is extremely easy for the entire game. But A Knight’s Quest tries to up the ante by throwing more of them at you at once.

This doesn’t work so well. The combat is clearly not built for crowd fighting, and it can get really tedious and annoying to have to fight several foes at once. This goes double for when the majority of your enemies get elemental shields that you need to hit with specific attacks in order to keep fighting. Some also require you to parry their attacks in order to break special shields. The parry is okay, but its animation could be more clear about exactly where the sweet spot is. It’s also really difficult to parry a shielded enemy’s attacks when three or four of his friends are simultaneously hitting you. 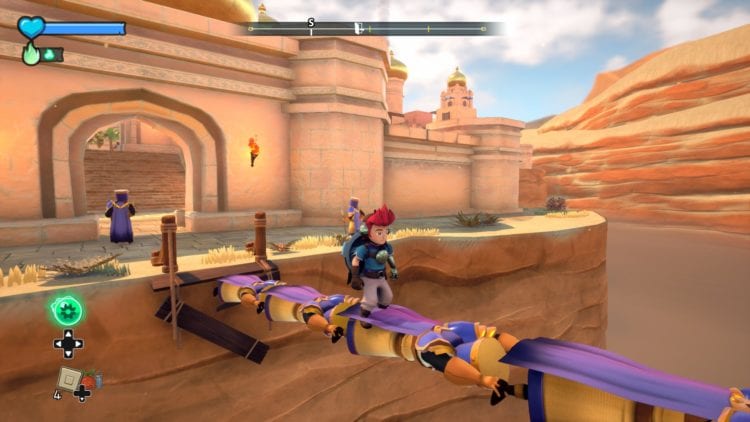 The biggest non-bug problem I have with A Knight’s Quest is absolutely the way the game saves. You can’t save at will. Instead, you have to enter or exit an area. Upon doing so, the game will save. This is perfectly acceptable when moving throughout most of the game’s locales, as you’ll frequently reach new areas. But there are plenty of sections that take place in one huge area.

For instance, the second and third dungeons can take well over an hour each, and the only time you can save is when entering or exiting them. This means that if you die, you’ll have to redo the entire dungeon from the beginning. During the second dungeon, I made sure to leave and then come back in order to save, but attempting this in the third dungeon reset all of the levers I pulled, meaning I had to do everything again anyway. Making saving work this way was a truly awful decision that makes no sense to me.

Complicating matters is the fact that the game can just crash on you sometimes. One boss battle crashed on me every time I attempted it. I got around this by quickly dealing with a specific attack that triggered the crash. Another time I got a crash from leaving an area. It didn’t save upon me exiting, so the game took me back to my previous save, which required me to do an entire section again. I routinely feared that something would happen that would cost me progress. 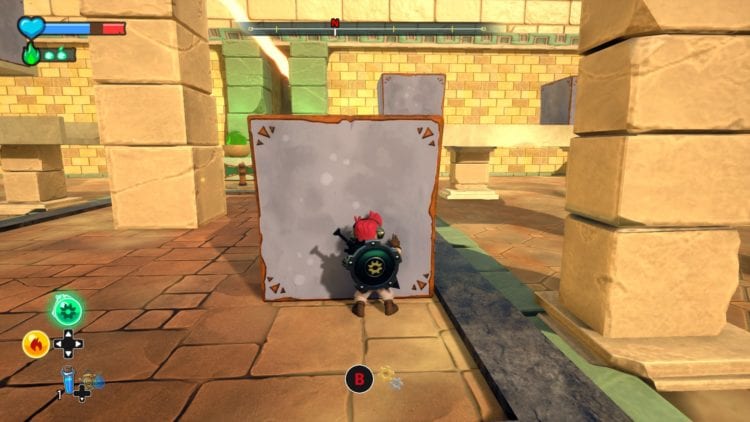 This brings me back to the bug that wiped my save. I entered a new area, and the game saved. So I quit. But when I went to play again, I was greeted by the very start of the game. My save file was just completely gone. I think I put at least 15 or so hours into the game at this point, yet my save now showed I had 0% and I couldn’t continue my adventure.

I’m still bummed about this because I was really enjoying A Knight’s Quest in spite of how derivative it is and the middling nature of its combat. It’s a fun game that I’d love to be able to recommend, but the save bug I experienced cast a dark shadow on my time with it. With the bare minimum of save options, this could have been a different story, though. All I can say is that I hope these issues get ironed out, because this is a game worth experiencing.

This is a very enjoyable game, and I'm disappointed that a bug deleted my save. But it's got most of what I look for in action-adventure titles and there's a whole lot to like here, despite how bland and familiar it can be.

Stardew Valley update 1.4 touches on everything