Amicia and Hugo decided to head off on their own, letting Beatrice and Lucas sail away. Now, the two siblings have encountered some helpful pilgrims, though danger is not far behind. Here’s our A Plague Tale: Requiem Chapter 6 – Leaving All Behind walkthrough guide to help you with the main objectives in this level.

A Plague Tale: Requiem — Chapter 6 – Leaving All Behind walkthrough guide

Amicia and Hugo will run to the tree in the distance. There, a short cutscene will play where you’ll pick up a feather collectible. 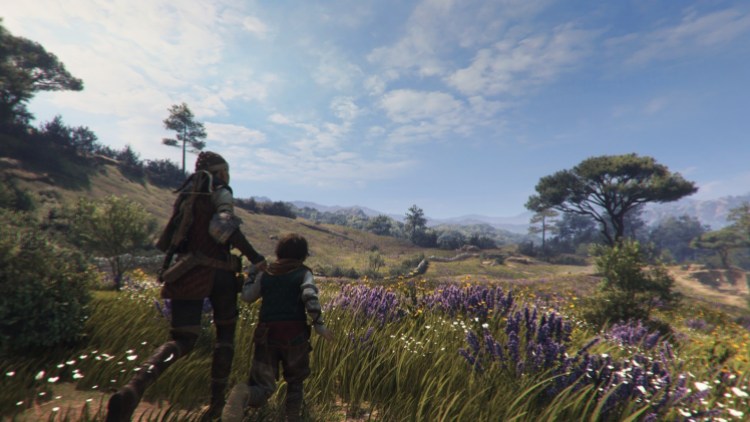 Continue following the path until you come across a pilgrim camp. Talk and mingle with the people, and you’ll eventually meet their leader, Perreux.

He seems like a nice fellow. Even when the soldiers arrive, just tag along and hide when he tells you to. Perreux will tell you when the coast is clear, so go ahead and walk to the dirt path. However, the soldiers will still spot you, and the duo will end up falling down a ravine.

Soon, you’ll see a quarry/cave system. If you enter and check the right-hand side, you can make Hugo unlock the door so you can grab the chest on the walkway. Hugo will also gain the ability to ping his surroundings (i.e., hold the “Q” button). This will reveal nearby enemies, so plan your moves ahead and watch how they patrol the chambers.

In the open area, your goal is to reach the fort at the back. Ideally, you’ll want to use the tall grass and obstacles off to the right so you can sneak past the soldiers.

If ever you do get spotted and you’re close to your objective, I would suggest making a run for it. As long as the melee troops are further behind and not a single archer is attempting to shoot you, the animation to open the door at the fort should still work.

Inside the fort, Amicia collapses due to her head wound (after Arnaud bashed her in the previous chapter). Hugo will gain another ability: controlling rat hordes.

For this, hold “Q” and click on a rat swarm. You can then use the directional keys to move them around, gobbling hapless soldiers that appear.

When all the enemies are dealt with, use Ignifer to light fires until you can pick up the torch in the middle of the chamber.

In the next room, don’t exit the doorway to the left. Instead, climb the ladder and check the storage area at the back. You’ll obtain a souvenir here.

Once you exit the fort, you’ll find yourself in another open area that’s crawling with hostiles. As usual, check the basins for any rat swarms so Hugo can control them. You can kill the guards that aren’t holding torches/near light sources. For those that you can’t touch, have Amicia throw Extinguis at them or just avoid them entirely.

Note: If a specific rat swarm has killed several guards soldiers already and Hugo lets go of them, you won’t be able to control them once more. Hugo will say that the horde has gotten bigger.

In any case, the path to the exit should be clear. Up next, we’ll conclude Chapter 6 – Leaving All Behind in A Plague Tale: Requiem by taking out The Beast.

Vampire Survivors 1.0 is out today

A Plague Tale: Requiem — How to defeat The Beast (Chapter 6)