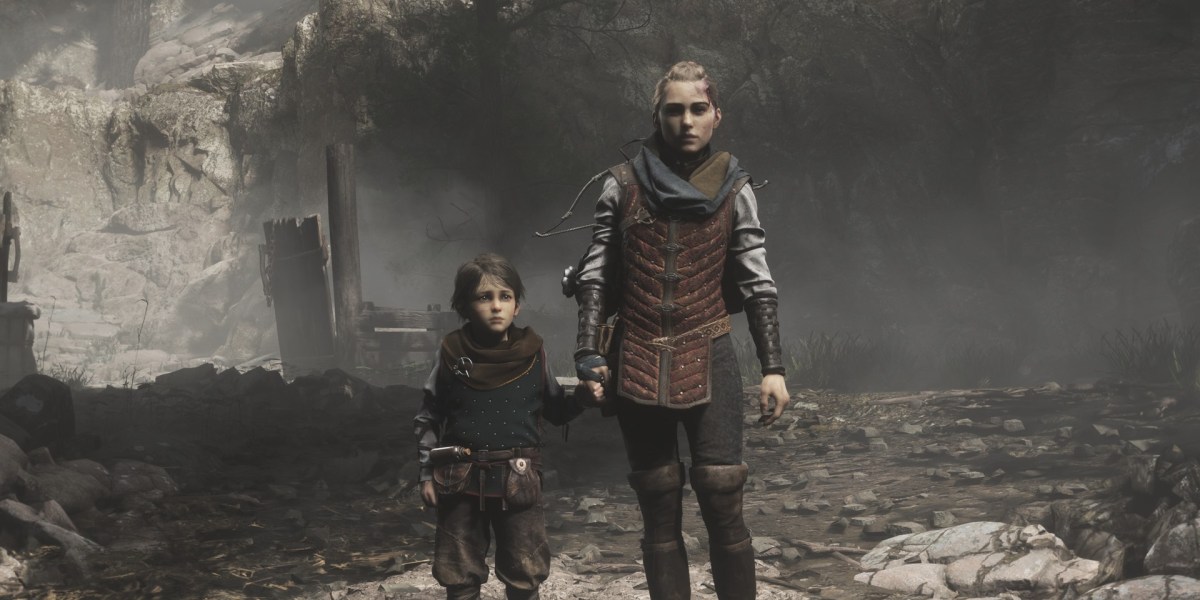 A Plague Tale: Requiem, the sequel to 2019’s A Plague Tale: Innocence, brings back de Rune siblings Amicia and Hugo, as well as familiar characters from the previous game. Naturally, you’ll once again need to survive the ravenous rat hordes, dastardly bandits, and heavily armored soldiers.

I must admit that Requiem, much like Innocence, drew me in owing to its themes and concepts. Likewise, the visuals are breathtaking, with a phenomenal Photo Mode that’s quite a treat for the player. Sadly, there are a few flaws that become glaring as time goes on.

Hugo, what have you done?

At the conclusion of A Plague Tale: Innocence, Amicia, Hugo, and supporting characters who are close to them sought to find a new home. The Macula, Hugo’s disease that lets him control rats, was thought to have abated. Suddenly, the curse manifests once more, and the group decides to find a way to help him. Of course, things don’t always go according to plan, causing the siblings to forge ahead on a journey.

That’s the gist of the story. It’s still set in France during the 1300s, and even some plot points are redone. However, Requiem‘s greatest strength comes from its underlying themes. The bond between siblings/family members, helplessness in a cruel world, and the struggle to confront one’s personal actions, these are interwoven as you progress further in the campaign, bolstered by likable main characters. 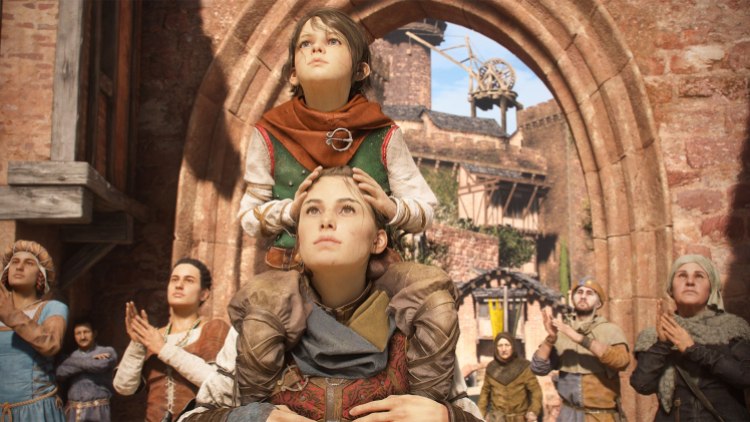 Another factor that kept me engaged was the game’s gorgeous visuals. From green fields in the countryside and war-torn battlements to corpse-strewn sewers and dark chambers, A Plague Tale: Requiem‘s graphics and design are a marvel to behold.

With an Nvidia RTX 3080 and Intel i9-10900K, I was able to run the game at high settings and decent framerates. To be clear, ray tracing, as of the time of this review, wasn’t available. Still, the atmosphere remained top-notch. 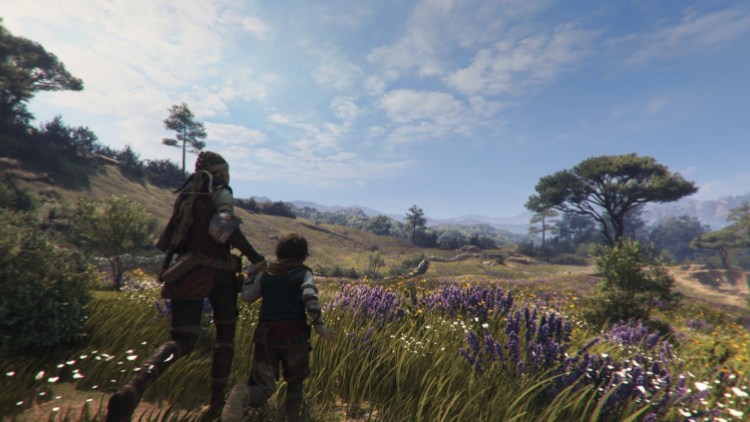 This is aided by what I simply dub as “Super Photo Mode.” Let’s say you’re watching a cutscene. In most games, you’ll only see this scene play out at a certain camera angle or fixed point, and that’s that. In Requiem, you can pause the game and enable Photo Mode to take a screenshot from a different angle during the scene. It’s even better than its predecessor owing to additional functions. You can adjust the depth of field, add a vignette effect along the edges, and even hide some characters or models. 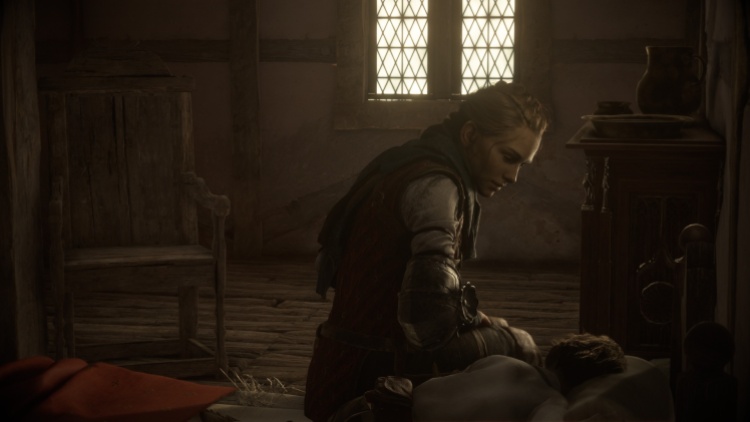 For instance, that image above is from a cutscene that focused primarily on Amicia’s face as she’s talking to Hugo. For the one below, it has Amicia falling as rats burst from underground. Lucas was originally in the frame, but due to his awkward pose, I just removed him entirely. After some adjustments, you’ve got a nifty picture that looks like a promotional image (which further reinforces the game’s amazing graphics tech).

I do have a couple of gripes. The first is that the controls are still awkward. You have to hold the left mouse button to rotate the camera (you can’t use the keyboard for this command), and the controls are inverted (even though they shouldn’t be according to aim settings). The second is that I would’ve wanted some options akin to what Cyberpunk 2077 has (i.e., changing poses or facial expressions). Lastly, it comes as no surprise that there will be issues when the camera goes out of bounds. Still, I consider this an amazing feature to have, and anything extra would probably make me lose countless hours just to get that perfect shot. 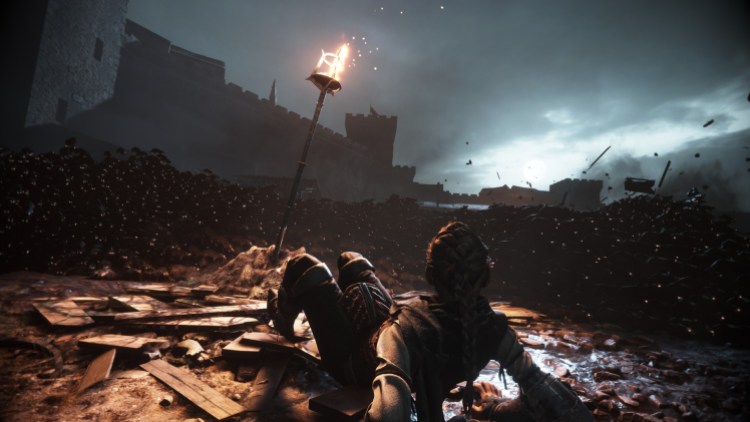 As for gameplay, this is where A Plague Tale: Requiem slightly falters. If you’ve played Innocence, then you’ll know what to expect. Once more, Requiem gameplay revolves around stealth action. In most chapters, you’re expected to hide from soldiers. If direct confrontation occurs, it’s mostly swift and brutal (Amicia only has one chance to counter a melee hit or she’d get cleaved and hacked). Shadows, which should play an important role in stealth games, aren’t as important here as tall grass or thrown rocks. 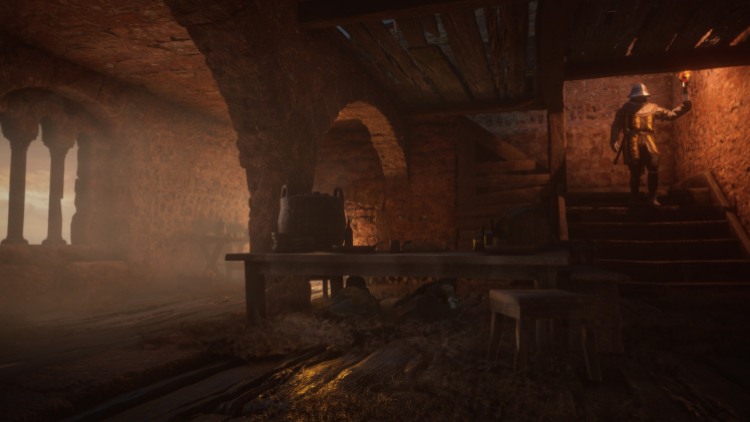 Moreover, you’ll need to deal with the rampaging vermin. There are some tools to keep you alive, like crafted thrown items that can cause braziers and hay bales to burst into flame, making the rats scurry away. You can also make tar to create patches of fire or strike Pyrite, causing Amicia to whirl it around to scare the creatures. There are even those that act like a flashbang, and those that can extinguish fires.

Most of the campaign will involve these types of “puzzles,” if you can call them that. There are sections littered with soldiers or rat swarms, and you’ll need to use the necessary items to go from one area to the next. Alternatively, there are times when you can ask a companion to do something (i.e., push a crate) so you can traverse a section. In addition to these, Hugo’s ability switches the perspective to that of the critters. You’ll move them around, clearing the way as they munch on baddies. Some chase sequences also occur, and these tend to be frantic and intense. 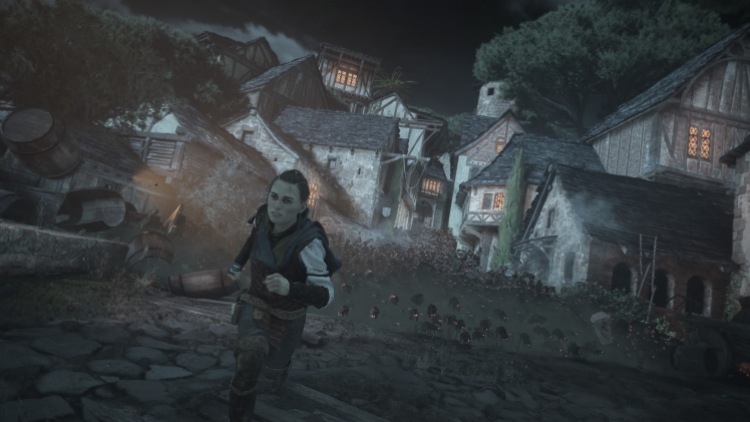 The only downside is that puzzles and chase sequences aren’t too difficult. In some instances, the areas are plainly linear or the NPCs already provide hints and solutions. I would’ve preferred brain teasers as opposed to mundane handholding.

Similarly, certain factors do require the sheer suspension of disbelief. Once again, Amicia can’t carry more than one wooden stick to light, so if it burns out and there’s nothing nearby, you’ll have to think of another way to get past the vermin horde. Likewise, she can’t bring more than one knife unless you acquire a workbench upgrade. Lastly, the crossbow can be a bit of a hassle to wield, but it often guarantees a kill.

Overall, A Plague Tale: Requiem improves upon its predecessor in some ways. The sharper detail and design, well-written characters, and stellar Photo Mode manage to create yet another unforgettable experience. You’re bound to put in some extra hours due to a longer campaign, but the unchallenging gameplay can get repetitive. 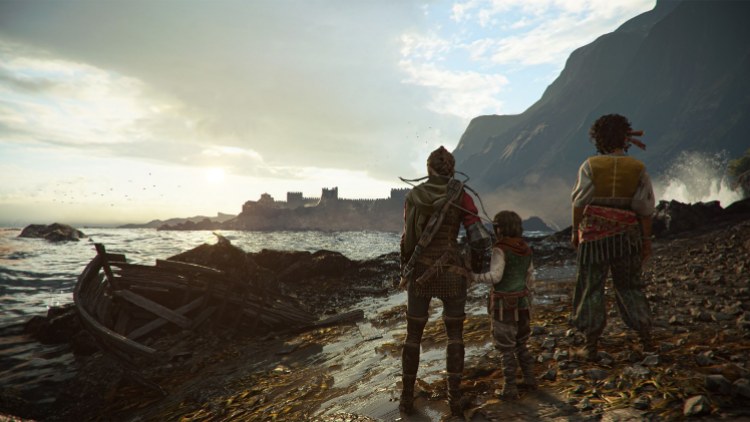 The sequel to 2019's A Plague Tale: Innocence sees Amicia and Hugo struggling to survive.
9

With gorgeous visuals, well-written characters, stunning atmosphere, and an amazing Photo Mode function, A Plague Tale: Requiem surpasses its predecessor. However, the gameplay and puzzles tend to remain fairly easy and straightforward.

Perfect Dark has been reverse-engineered, making way for a possible PC port

By Daniel Pinheiro4 days ago
Reviews