Thief: The Dark Project was the first title to teach me the effectiveness of a simple, subverted concept. Thief asked: “what if you hid from the monsters in an FPS instead of shooting them?” It was a straightforward question with a revelatory answer, and the game’s interlocking mechanics can all be traced back to it. The function of light and shadow (because you need to be able to stay out of sight); the superb sound design (because you need to both be able to gauge your own noise levels and hear other people’s); and the lovely bag of gadgetry (because sometimes you need a hand slipping past trouble).

In 1998, Thief defined the joy of stealth. To prove it, here’s a picture of a moody street.

Do you ever wonder what happens after you leave a level in a stealth game? I do. It amuses me to leave unconscious guards and soldiers in unlikely circumstances: on rooftops, in Lordly bedrooms, beside a heaped pile of their companions. What do they do when they wake up to find an irate pigeon roosting on their face and all their valuables missing? Do they even want to talk about it?

2012 has been a bountiful year for those of us who prefer hide-and-go-sneak to all-out slaughter. There’s much to be said about the faults of Hitman: Absolution (and I’ve said plenty), but it’s a pretty robust stealth title. Thanks to IO Interactive, and a symptom of the series’ bizarre new approach to disguises, one of the year’s more memorable moments has been the ludicrous sight of Agent 47 strolling around dressed like a British judge in a South Dakota courtroom. In Hitman’s curious new world, wearing the clothes of the one and only judge in town actually makes Agent Baldy less recognisable than any other outfit.

Fun though it is to virtually impede the US justice system, Absolution’s main attraction are the ample opportunities for Agent 47 to sit behind a box, or a sofa, or maybe a desk, and have a bit of a think. There’s an awful lot of quiet, personal time in stealth titles and Absolution handles the tension of near-discovery as well as most others in the genre. It’s debatable whether it’s a great Hitman title, but as a perching-behind-a-shelf-dressed-as-a-Chinese-chef simulator the game is at its comfortable best.

It’s a somewhat perverse truth that the measure of success for sneak-based games is a lack of incident. If you make it beyond the guards, past the security gates and up the stairs with nothing happening, you’ve actually bested the game. Any bursts of chaotic activity are demonstrative of a fuck-up, not a fun rush. Stealth players are gaming’s finest contrarians.

What do you think about when you’re hiding there, in that darkened corner? Are you planning your next move? Praying that a guy won’t suddenly round the corner and force you to murder him? You really don’t want to do it. Not after you just heard him talking about his family and problems with his boss and all those medical bills. But you’re already figuring out where to dump the body, aren’t you?

Of course, sometimes it can be best to make a huge commotion just for the hell of it. Especially if it’s one directed at someone else. Messing with people is, after all, the stealth genre’s second trump card.

I like hiding behind things, popping out and choking people. In any other walk of life, this makes me a dangerous predator. In a stealth game it feels more like being a loveable prankster.

Mark of the Ninja is a game keenly aware of this. Transposing the standard stealth kit to a 2D world doesn’t, it turns out, hinder the ability to freak out guards, screw with their perceptions and (ultimately) toy with their mortality for your own twisted enjoyment. Take out a nearby light and a guard will dutifully wander over to take a look at the damage. Leave a body for them to find, or slay a comrade in front of their eyes before zipping away with a grappling hook, and they’ll become quite unsettled.

Like all great stealth titles, Klei’s ninja escapade knows that outwitting and confounding robustly rule-bound AI (with a wonderful move and tool-set) is as important as the mechanics defining discovery. Guards are the oft-unsung heroes of the genre, without whom we’d just be sitting around behind pillars waiting for the sun to rise.

Is there only one employment agency for guards? It always seems to be the same luckless guys providing private security for some rich bastard. Does their lack of socio-economic mobility ever bother them? Maybe it’s time they tried a different field. One where having a decapitated head tossed at you as a shadowy assailant giggles “heads up!” is not considered part of the trade.

The finest invisible ink entry penned and stashed in 2012’s stealth folder was Dishonored. A great source of its triumph was an open, almost boundless, love for Thief, but it’s a game that has plenty of confidence in its own design too. You see, Dishonored doesn’t bother much with shadows. They’re there, and you can blow out candles if you want to give yourself a miniscule advantage, but it’s a game far more concerned with heightening moments which the Thief series could only hint at.

“Heightening” being an apt term, as much of Dishonored takes place high above the rat-packed streets of Dunwall. There were brief glimpses of vertical stalking during Thief’s three-game run; times when you’d be creeping about in some rafters, or making your way along rooftops (like Thief 2’s excellent “Life of the Party” mission), but it would never quite deliver in full. Garrett, for all his talents, was never the most mobile chap in the world. His rather limited mantling powers aside, most vertical climbing was reliant on limited numbers of rope arrows.

To get around those limitations, Dishonored says “fuck it, have some magic powers” and bestows the fluid mobility of ‘Blink’ upon you. With this early act, the game dramatically expands the player’s options for infiltration and escape, two major pillars of a compelling stealth level. In most titles of this kind discovery means either death or messy violence. It can mean that in Dishonored too, but Blink gives you a viable third option: vanishing onto a nearby rooftop. 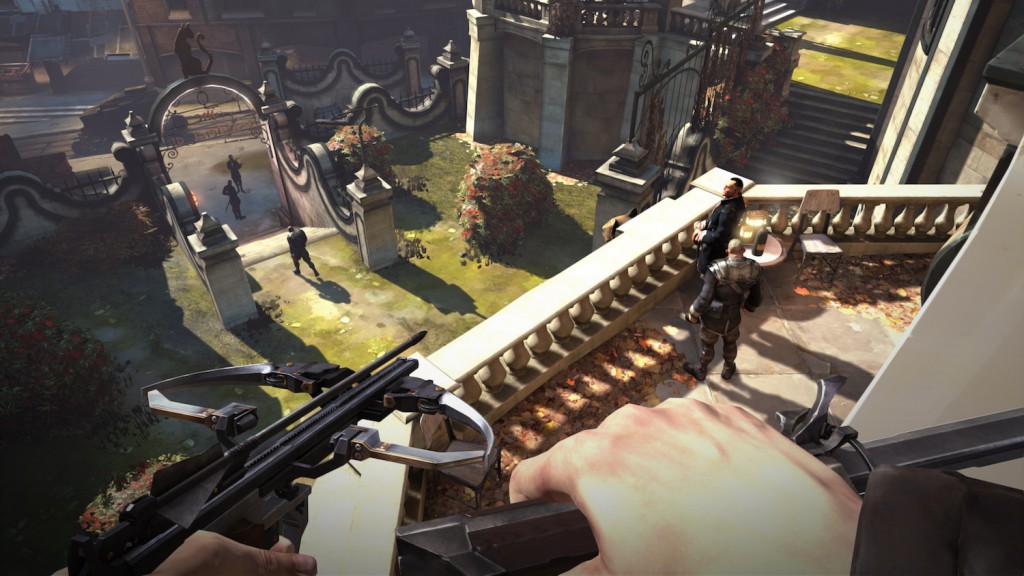 How come Garrett never has enough money to pay his rent? He steals chunks of gold every other week, and he doesn’t exactly live in the fashionable part of town. Does he have some sort of debilitating vice that we don’t know about? He does shovel food in his face rather quickly, so maybe that’s the problem. Is the next Thief game going to have a rent management tie-in on Facebook that teaches young couples to be more financially astute?

It feels strange, and a little sad, to be wrapping up a 2012 stealth piece without any clear sign of when Thief 4 might show up. Announced all the way back in 2009, there’s been barely a peep out of Eidos Montreal about the next installment of Garrett’s Excellent Adventures (or even confirmation that Garrett will be showing up for them). Still, maybe it’s appropriate that the game is undergoing such a secretive and silent development process.

It’s indicative of how strong the stealth crop has been this year that Thief 4’s presence isn’t actually required; but the potential for it to either be a return to series form (like Deus Ex: Human Revolution) or a polarising point of discussion (Hitman: Absolution) means stealth fans won’t be able to keep their eyes averted indefinitely. Whether or not 2013 sees the fourth game emerge from its Canadian bolt hole, the Eidos Montreal team have surely been casting a watchful eye over the way games like Dishonored and Mark of the Ninja have grasped the old Thief template and fashioned it into a sleek, fascinating shape of their own design. For Garrett’s sake, I hope so.

Those VGA tenth anniversary winners in full; prepare to disagree 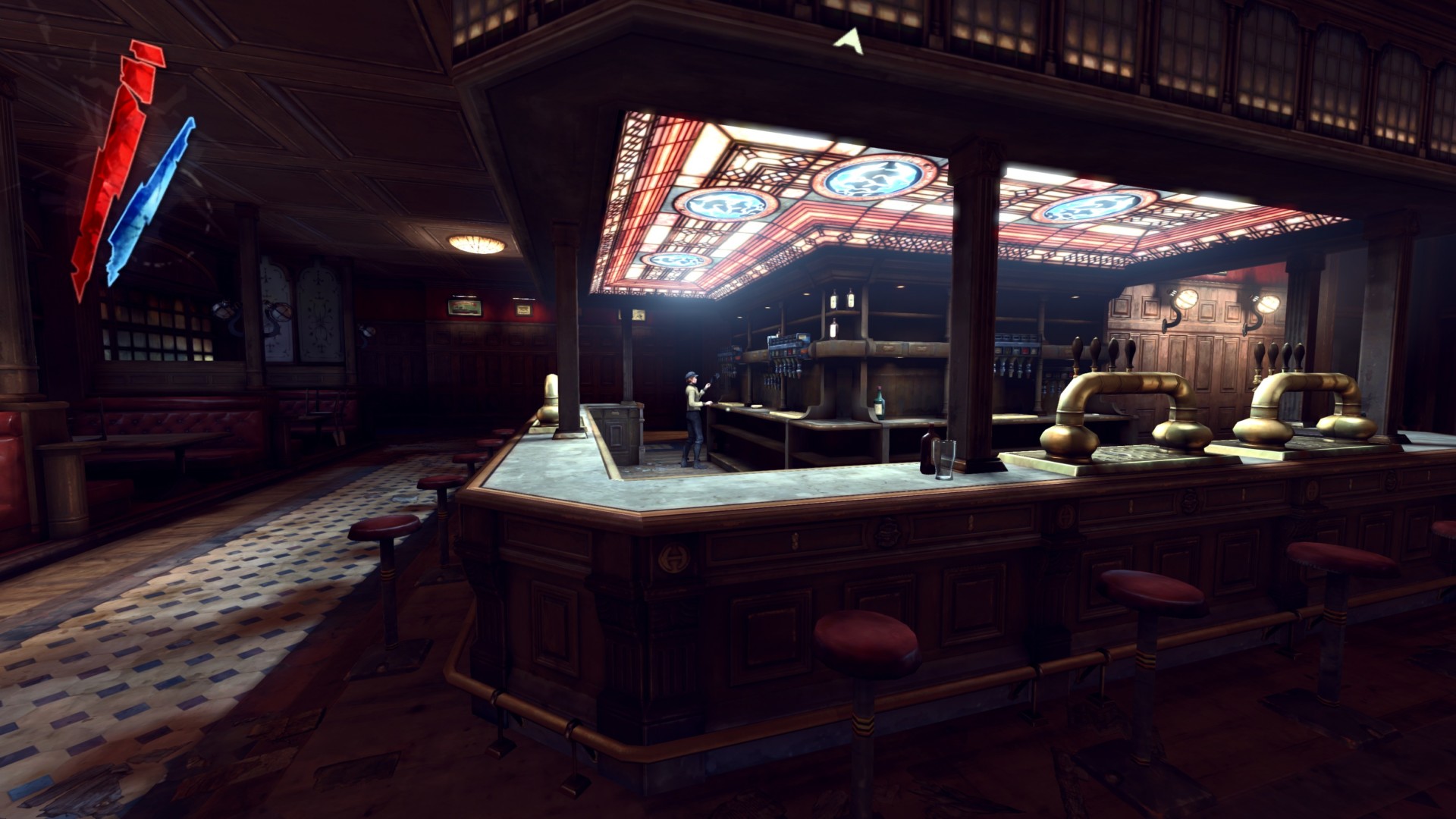 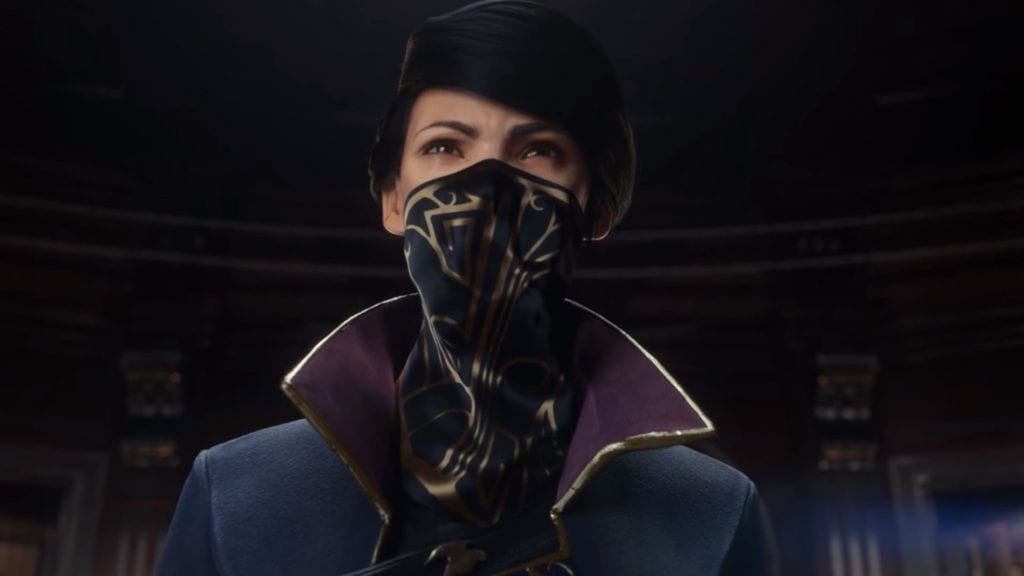 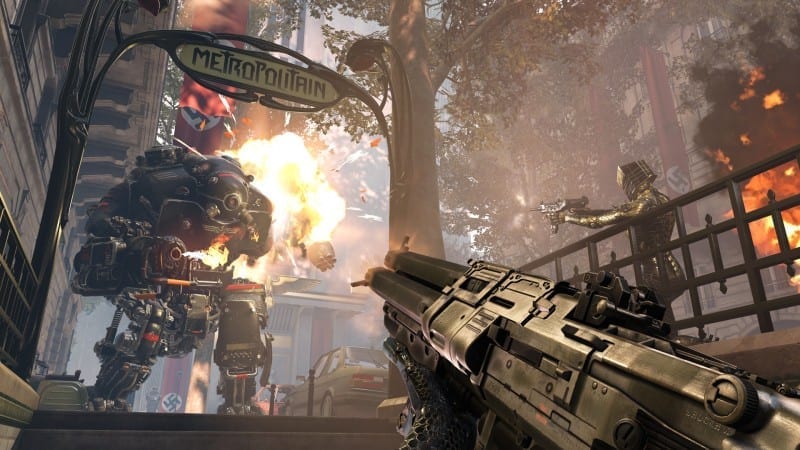 Mark of the Ninja - Stealth In A Sidescroller 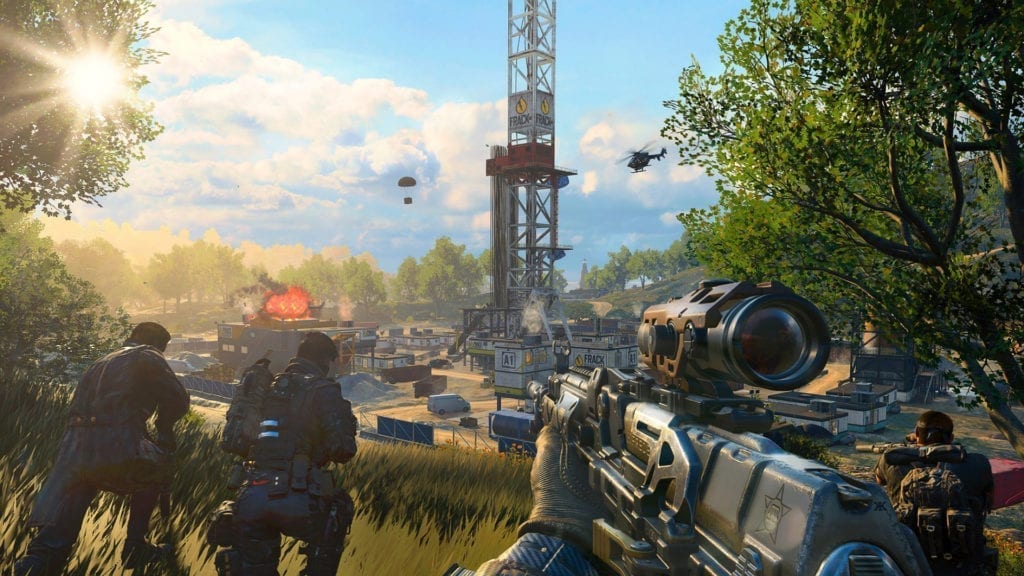 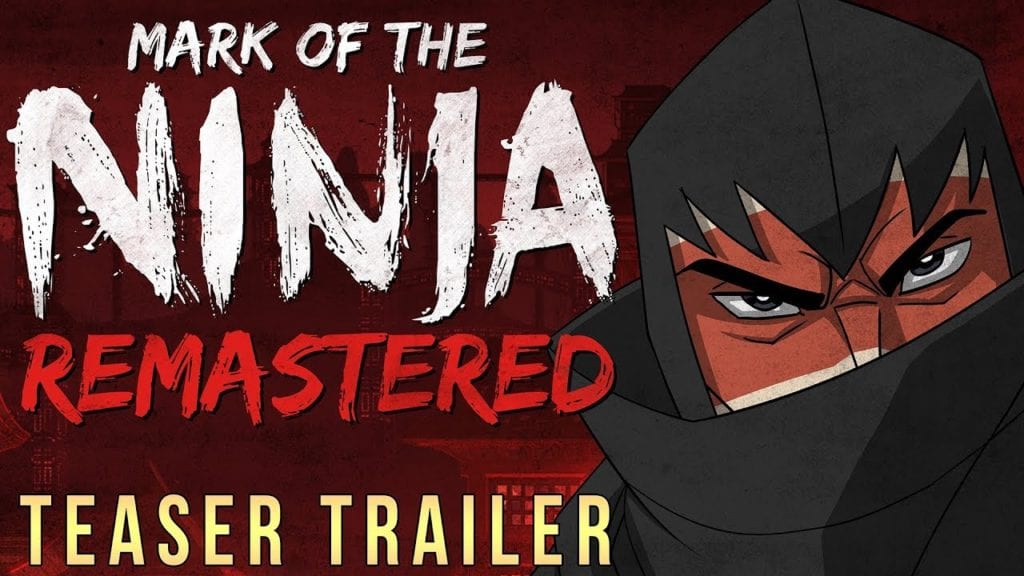 Klei's excellent Mark of the Ninja is being remastered for PC 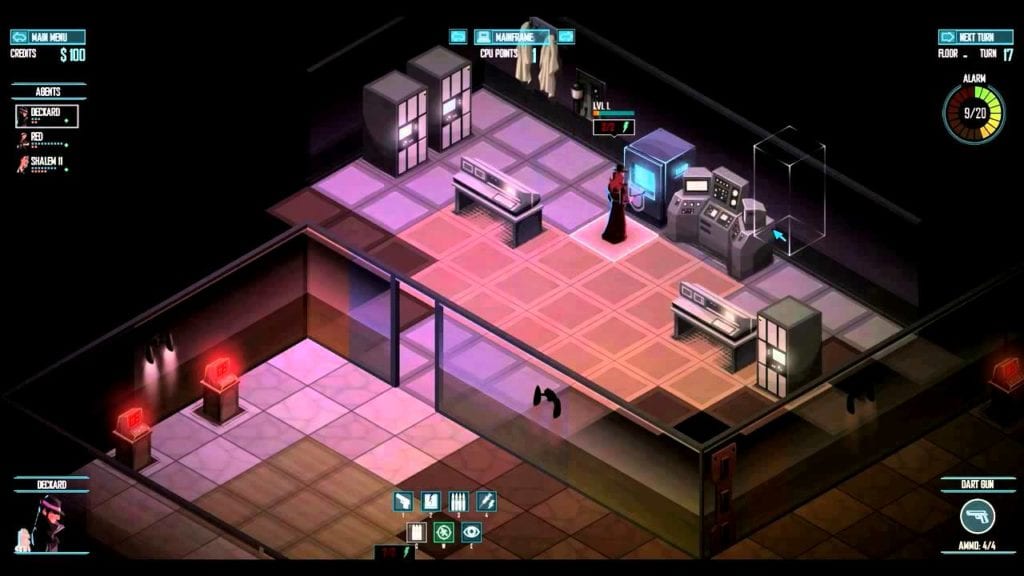 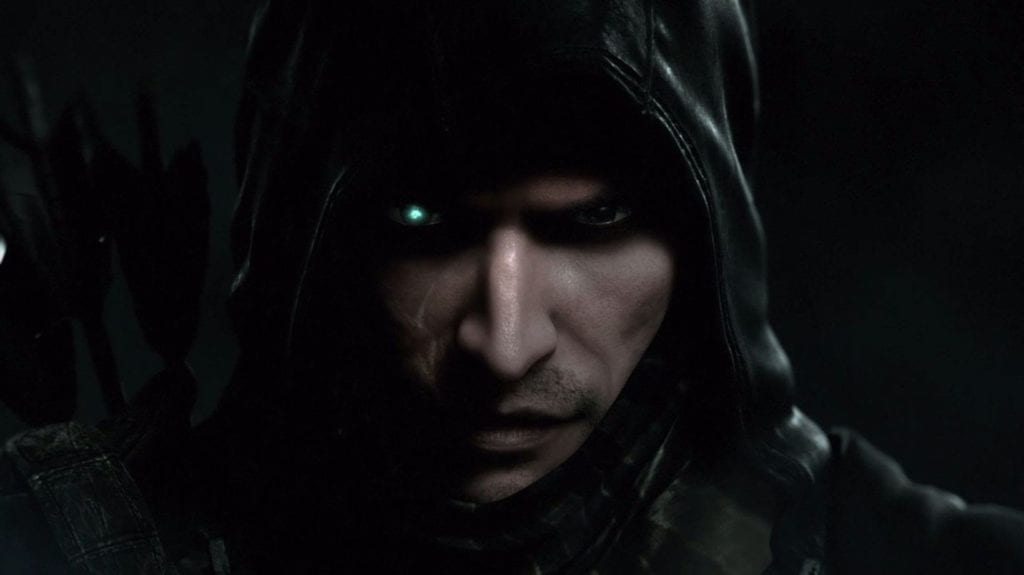 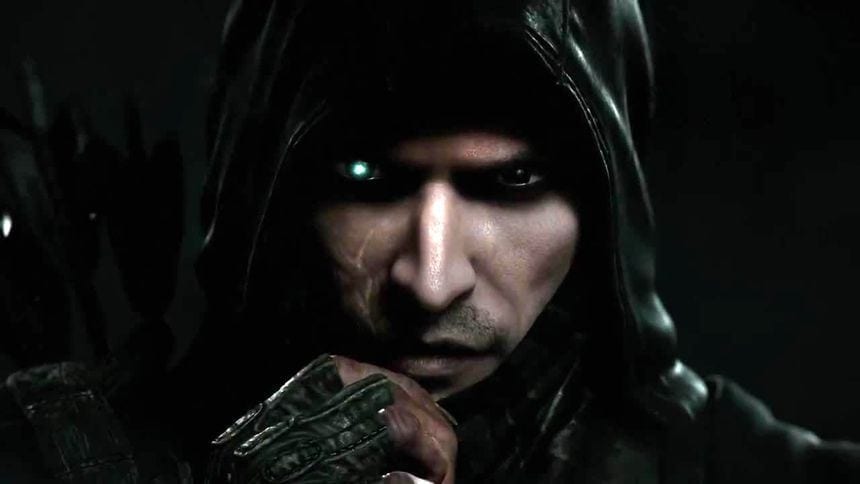