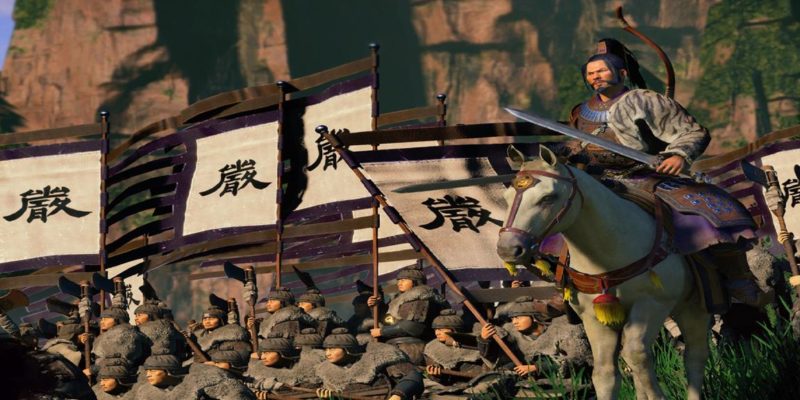 Yan Baihu’s campaign in Total War: Three Kingdoms – A World Betrayed has a few hurdles that can be easily managed. Thanks to his White Tiger Confederation mechanic and the bandit factions overhaul, this FLC leader is more than ready to defend the Southlands and expand further while forming coalitions and alliances along the way. 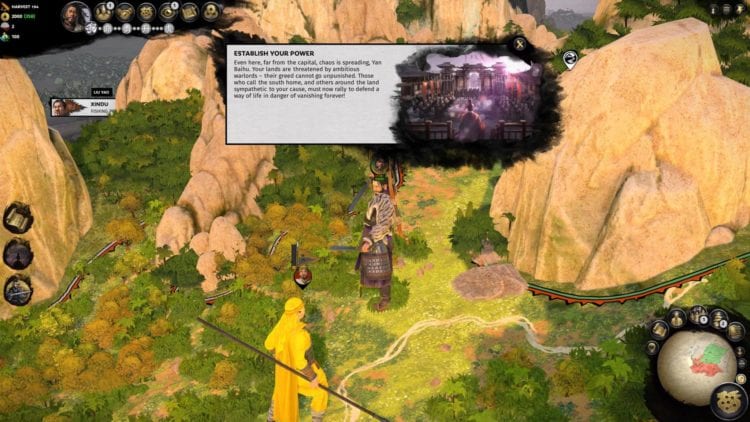 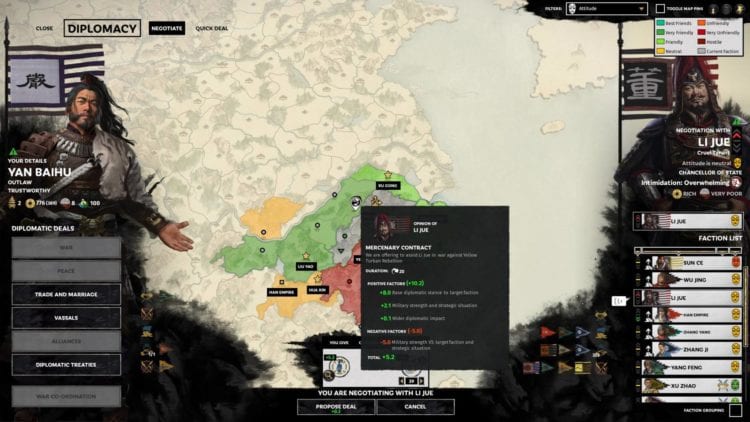 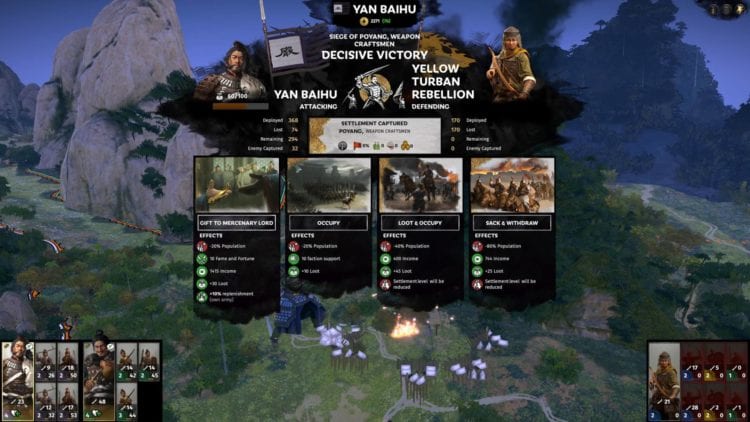 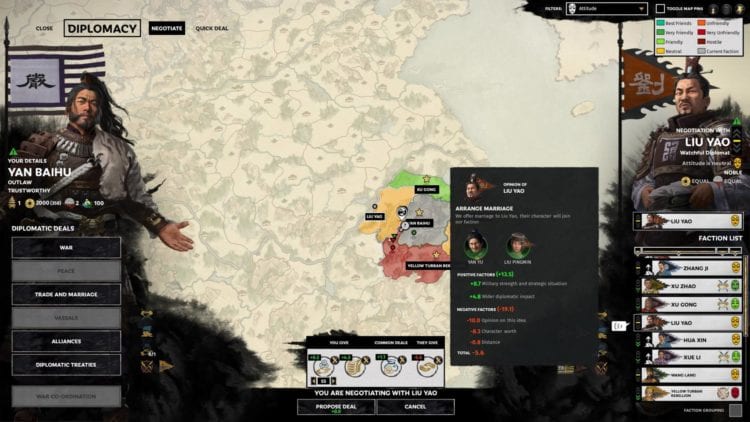 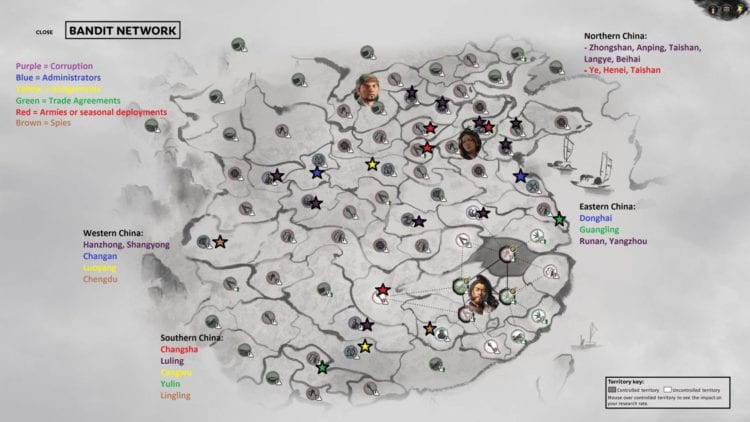 Sun Ce will declare war on Liu Yao. If you accept your new pal’s proposal, you’ll get 3,000 gold and the “Financial Support” buff which greatly reduces unit upkeep and character salary for five turns. If you decline, you’ll suffer a diplomatic relations malus. 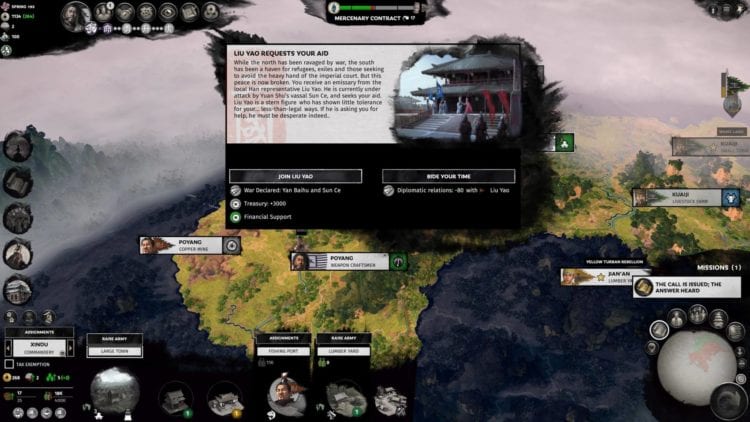 It’s possible that Sun Ce arrives with a small army, or he could bring a doomstack. Funnily enough, he doesn’t fully replenish his troops. In any case, move Yan Baihu’s army closer to Xindu’s fishing port. Switch to ambush stance to waylay him.

If you want, you can let him capture the port first. You can attack him on your next turn to take control of the entire commandery. All of this should be done by turn 10 or so. From here, your main army will just defend Xindu’s fishing port for a few turns. 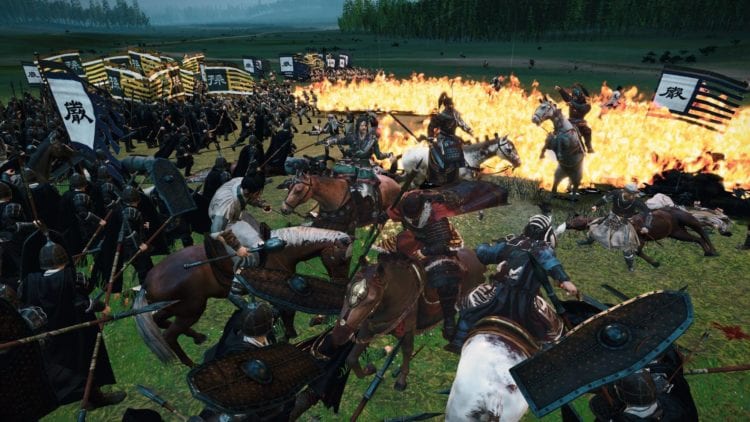 Taking out the Yellow Turbans and completing your Mercenary Contract

Yan Baihu’s starting bandit officers have terrible perks (construction cost reduction). They shouldn’t be anywhere close to an administrator’s position. Even Yan Yu is useless as your heir. But, help will arrive soon enough.

That’s because Lu Bu and Liu Chong tend to get wiped out early in Total War: Three Kingdoms – A World Betrayed. Lu Bu will join Liu Bei before the two end up fighting. As for his officers (as well as Liu Chong and Luo Jun), they may drop by your court ready for recruitment. Ideally, your Han officers would form the backbone of your armies and court positions. 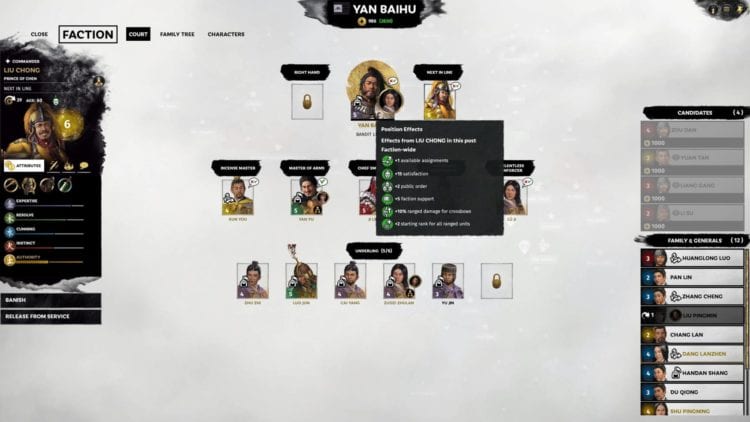 Your second army should also have additional units and officer retinues attached, but do take note of the “Financial Support” buff. You may need to disband some units down the line.

The Yellow Turban NPC faction in the south can be quite powerful if left unchecked. Although a couple of Jianan’s minor settlements have small garrisons, one may be hiding their main army (it’s usually the lumber yard). This army will continue to field more troops, though it’ll remain on the defensive. Don’t worry, because unlike in Mandate of Heaven, A World Betrayed‘s Yellow Turbans no longer have the Fervor spread mechanic.

Continue expanding until you take all of Jianan commandery. Our Mercenary Contract with Li Jue was only for extra income, so try to avoid gifting him settlements since we still need to build our power base. When you’re done wiping out the Yellow Turban threat, you’ve got the vacant settlements to the south that can be colonized. Just move fast so Wang Lang doesn’t beat you to them. 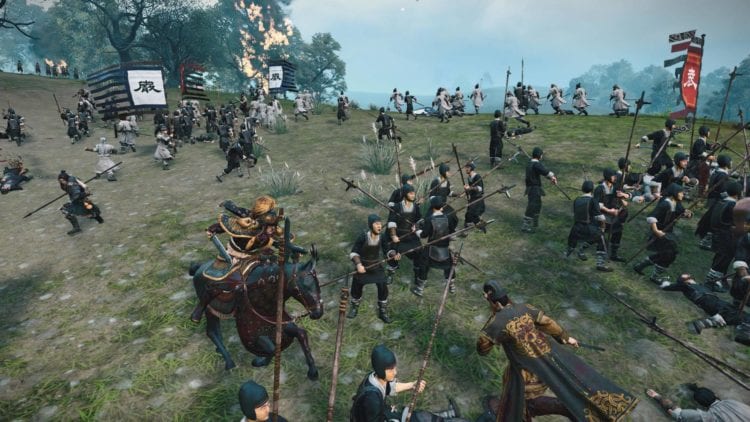 Also from turn 4 onwards, you should continue to check your diplomatic standing with nearby factions. Liu Yao, given your help in the war against Sun Ce, will accept a coalition invite soon if he hasn’t yet. Yang Feng, once he breaks away from Li Jue’s faction, will buddy up with you as well. Leaders such as Xu Zhao and Xu Gong may take a while to get convinced, but they’ll eventually come around. Other lords such as Lu Bu and Zhang Yan may also surprise you.

Build up your White Tiger Confederation since this will slightly decrease research times and recruitment costs of non-bandit units. Plus, since we’re playing Total War: Three Kingdoms – A World Betrayed, it does seem nice to have friends who won’t stab you in the back. 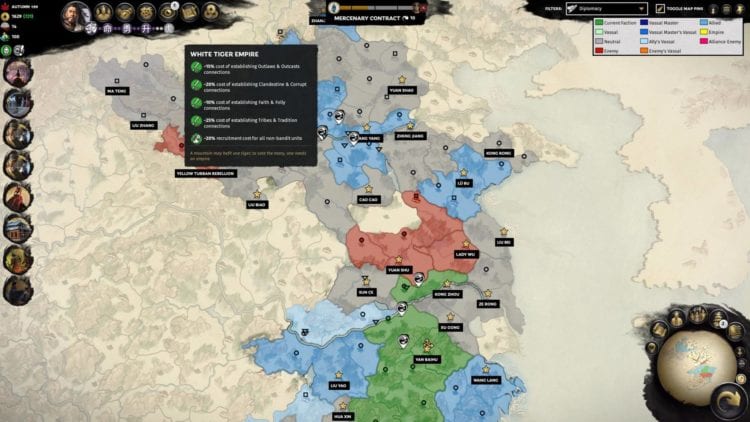 There are some noticeable flaws with this system, as has been the case since Total War: Three Kingdoms released: 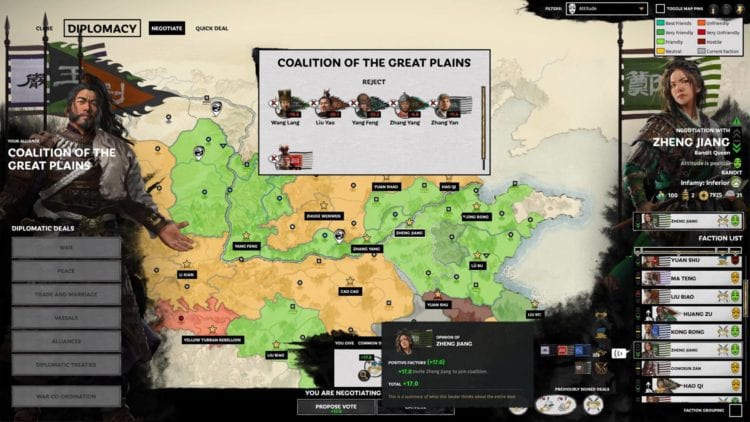 Around turn 15, Yuan Shu will declare himself emperor. Sun Ce will automatically rebel and go to war with him. Since you managed to kick his butt out of Xindu, you’ve got nothing left to worry about. Open your diplomatic panel and make peace with either Sun Ce or Yuan Shu and continue warring with the other. You could also propose a Mercenary Contract (targetting the other lord) after you’ve made peace. 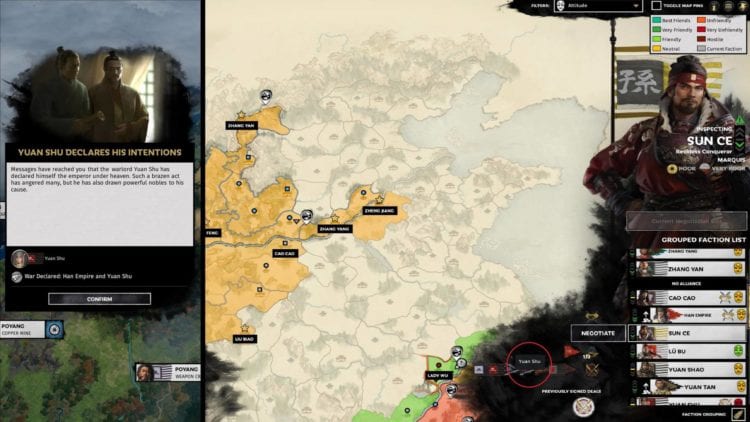 Note: As mentioned in our bandit faction mechanics guide, there’s a major bug that can happen if you make a peace offering and a Mercenary Contract in the same diplomatic negotiation. This will lead to the mechanic breaking for several turns, not providing rewards, and your turn counter going negative. You should propose peace first (demand some goodies if you want), and then offer to become a mercenary in a separate negotiation. 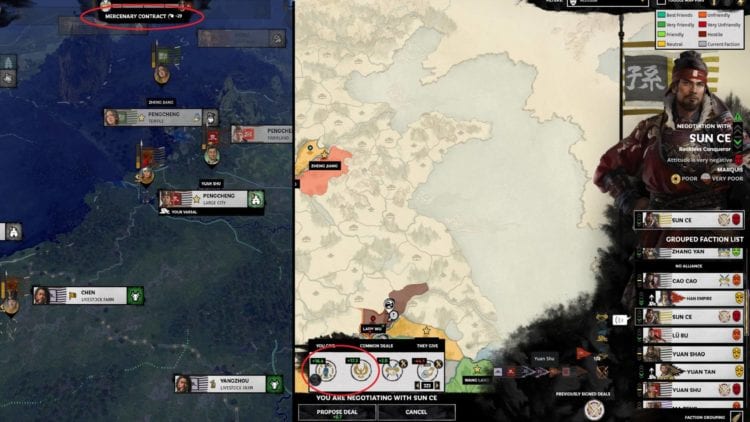 The King of the Shanyue

Yan Baihu’s campaign in Total War: Three Kingdoms – A World Betrayed is made exciting due to the bandit factions overhaul. As mentioned in our official review, these changes have managed to one-up what Mandate of Heaven did for the Yellow Turbans.

Forming coalitions with many other warlords creates a peaceful and almost tranquil game state where only a select few conflicts would erupt. By the time Yuan Shu and Sun Ce had enough (turning into vassals even), no one else declared war on me for dozens of turns. I was free to focus on domestic affairs. 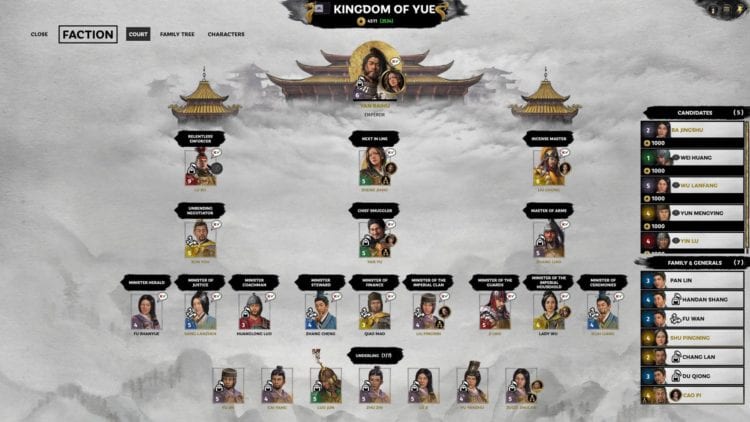 Due to the “different cultures” concept, Yan Baihu won’t be able to annex his vassals. Likewise, you can’t force any kingdom contender to abdicate in your favor: 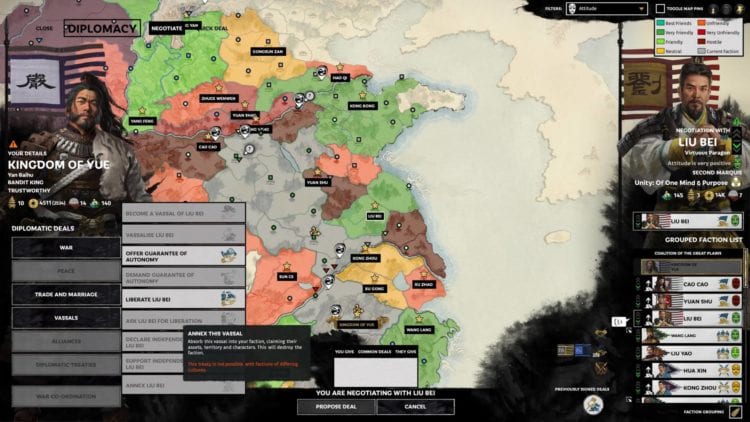 Funnily enough, you can still become a mercenary even for the other pretender kings: 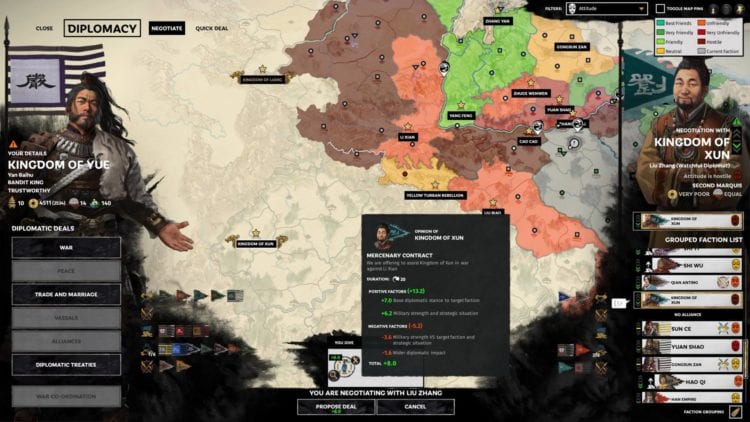 Total War: Three Kingdoms – A World Betrayed is available via Steam. Yan Baihu, meanwhile, can be obtained as free downloadable content (FLC). For more information, check out our guides and features hub.