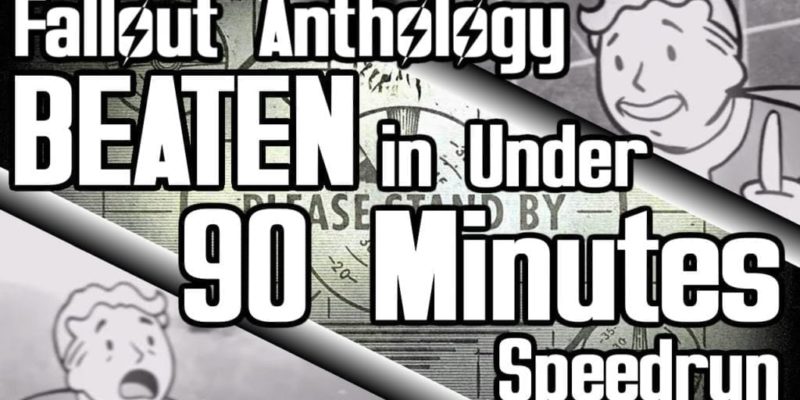 Here is a list of things you can do in ninety minutes: Watch a movie, go out to dinner, drive the entire length of New Jersey, listen to the Descendant’s Milo Goes to College four full times. Or if you’re a streamer named, uh, tomatoanus, you could complete a five-game Fallout speedrun.

Tomatoanus recently completed an “Any% Main Series” speedrun of the Fallout Anthology in just under an hour and a half. That means in less than ninety minutes, tomatoanus manages to complete Fallout, Fallout 2, Fallout 3, Fallout: New Vegas, and Fallout 4. I can’t even sit still for that long.

It’s fascinating to see a master manipulate the Fallout games. Through a combination of glitches, optimizations, and practice, tomatoanus moves from title to title with relative ease. As single-player RPGs, Fallout games take hours to complete. But tomatoanus — and dozens of other Fallout speedrunners — beat each game in anywhere from five to forty minutes.

Tomatoanus includes a handy FAQ with his world record run. The FAQ explains how he pulls of game-specific tricks. In Fallout 3, for example, tomatoanus falls off a cliff at the beginning of the game intentionally. According to the FAQ, this is to pull off a trick called “speed cripple.” It’s difficult to explain in non-speedrun jargon, but tomatoanus outlines describes the trick as follows:

In Fallout 3, when you cripple a leg, the game does two things. The first is give you the cripple animation, and the second is reduce your movespeed by 60%. This means when you heal your leg by one of the many possible methods, the game removed the cripple animation, and gives you 60% additional movespeed, to bring you back up to 100% speed. If you make a quicksave while healthy, and then cripple your legs and quickload at the perfect time (this is why I repeatedly jump off the cliff), it’s possible to load your game where you’re healthy at the same time as the game giving you back your additional 60% movespeed. This means that the game gives you 60% movespeed on top of your 100% movespeed from the quicksave, making you move at 160% movespeed.

The five-game Fallout speedrun is a blast to watch. Whether you understand minutiae or not, tomatoanus’ feat is impressive. He’s currently the only runner on the Anthology’s Any% Main Series leaderboard. But something tells me he’ll have some competition soon.

Thriller ‘The Occupation’ set to release in October