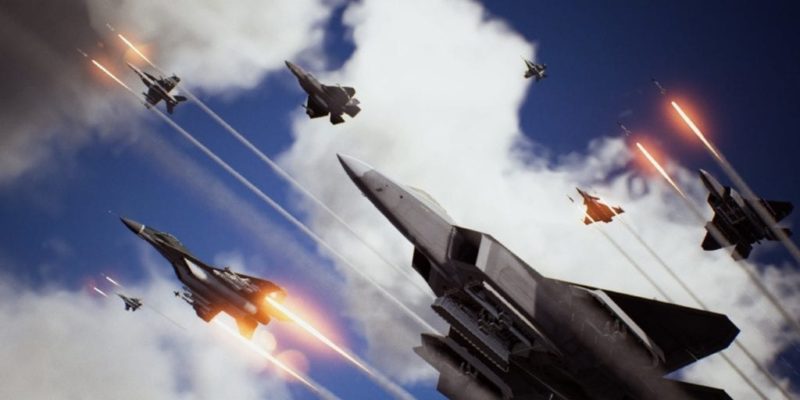 As someone who hasn’t played an Ace Combat game in almost two decades (the last one being Ace Combat 4: Shattered Skies for the PlayStation 2), I approached the latest installment of the franchise with an open mind. I am not a combat/arcade flight sim fan by any stretch of the imagination, so I knew Ace Combat 7: Skies Unknown would be a challenge. What I didn’t know was just how much I’d enjoy it. 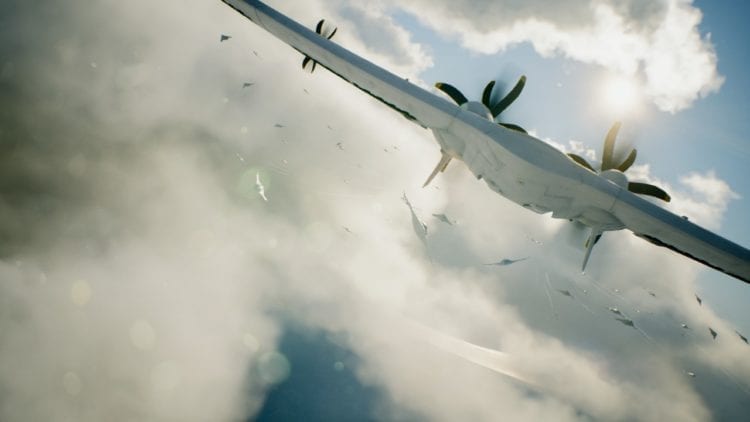 The Arsenal Bird – a mobile flying fortress with hundreds of drones, a laser beam, and shield tech. That’s practically a boss fight right there.

But first, let’s get the bad stuff out of the way — the story. I must admit that I couldn’t feel attached at all to the game’s narrative. You play as “Trigger,” a silent protagonist whose promising career gets shot down (figuratively) after a major friendly-fire incident. Trigger ends up with a penal squadron sent out to dangerous missions given how expendable they were. From there, you amass your kills, earning the respect and adoration of fellow pilots.

The game is spliced with numerous cutscenes from news broadcasts to story exposition. It introduces you to a number of supporting characters. There’s Avril, a scrapper-turned-POW (whom I initially thought would be the lead character), and Mihaly, a highly-skilled pilot whose abilities are being used as data for drones. There’s also a princess, a couple of teen girls lounging around, and the mad scientist version of Albert Wesker. And, of course, there are a dozen or so pilots and wingmen who have their own quirks and dialogues — some of whom you’ll hardly get to know before they’re downed.

The single-player campaign tells of a war between Osea and Erusea (instigated by the latter). There are, naturally, people pulling the strings. Overall, the plot feels fairly shallow, contrived even, just to try and get you invested, especially with the cheesy dialogue. There are some nice nods to past characters, though, which veterans would notice. 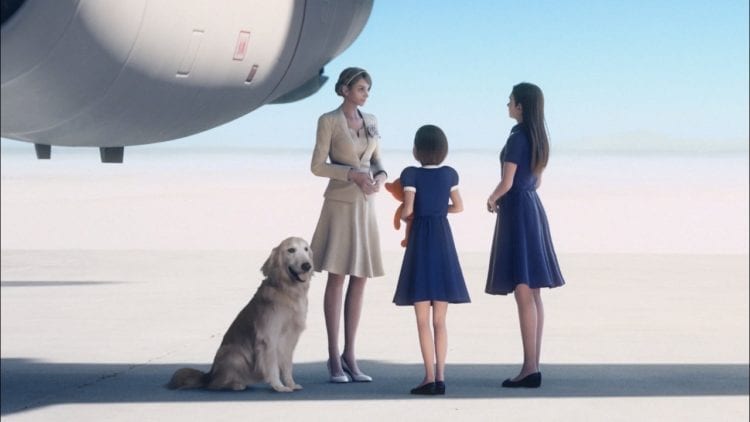 The biggest strengths that Ace Combat 7: Skies Unknown has are, naturally, the action and the visuals. Powered by Unreal Engine 4 and trueSky technology, Ace Combat 7 presents visually stunning scenery and immaculate horizons. Blazing through and powering your thrusters make your gamepad rumble, even as thundering explosions rock your eardrums. Punching through enemy formations at high speeds, doing a barrel roll to avoid a missile, and then turning around to blast multiple bogies has never been this much fun!

Flying through clouds and seeing the streak of sunlight isn’t just for show. It can also help you shake loose missile fire (the same works for enemies). Frost and moisture are also visible on your screen, and your plane can even ice up.

For those looking for a cinematic experience, post-mission replays let you view the action from multiple camera angles, letting you relive what you just played. Even better, within missions themselves, you can hold the fire button after launching a missile and the camera tracks your shot. 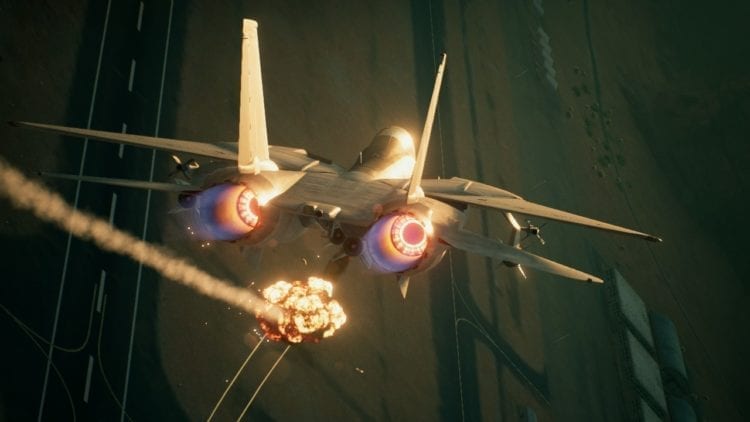 Each mission has a replay for you to “photo mode” to your heart’s content.

Ace Combat 7: Skies Unknown and The Aces of the Air

The game’s 20 single-player missions can get a little repetitive given how extremely linear it is. The good thing is that there’s enough variation — a change of scenery, a change of pace — to keep you excited.

One mission to rescue a VIP has you skirting past giant red blobs (radar coverage) to avoid detection. Another has you destroy multiple bases to reach a score threshold. A checkpoint follows that, and then you’d have to chase down cargo trucks through a sandstorm. A favorite of mine takes you to a mountainous region during a thunderstorm. If lightning strikes your craft, sparks fly and your screen (and radar) get momentarily screwed up. The environment is both a thing of beauty and one that presents tactical scenarios.

Short scenes where you’re landing your plane, taking off, or refueling are a nice additional touch to break the monotony, though they can be skipped. Some lengthier missions might even allow you to fly back to base to resupply and repair before going back to the fray. The game can also be challenging, with unforgiving timers and score requirements even on normal difficulty. I managed to finish it after 12 hours, although not without a few restarts along the way.

Key encounters during the campaign include “boss fights” against a top ace (who just flies circles around you), and even a gigantic aerial fortress — the Arsenal Bird. These moments, coupled with a pulse-pounding score, punctuate an epic experience.

The only downside at times is that you’ll feel as though you’re fighting alone. While you do have dozens of friendlies around you, they might as well be flying blindfolded. Far too often, you’d be the only one taking out enemies, turning into an ace dozens of times over. You can’t even customize what your squadron flies. Judging by their skill, they’re probably piloting derelict junks. 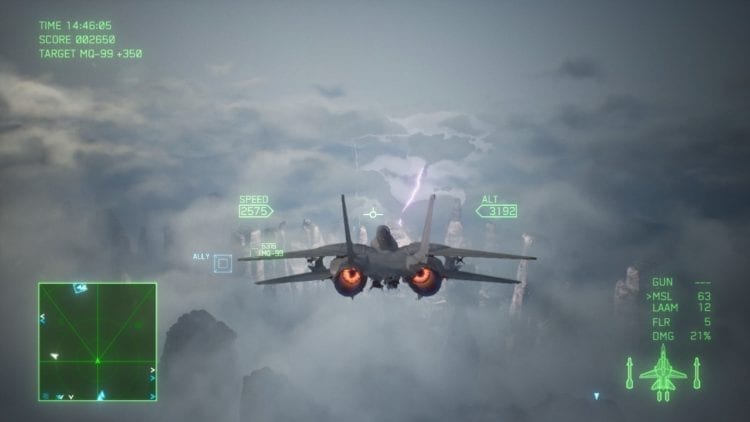 Getting hit by lightning fries your systems completely for a few seconds, turning you into a sitting duck.

In order to succeed in your missions, you’ll have to make use of the MRP (points or credits) that you’ve gained throughout your playthrough. You can keep replaying missions (or doing multiplayer matches) to unlock new aircraft and components. Some might increase your missile or bomb capacity, while others improve maneuverability or defense. Another, which you can obtain mid-game, lets your aircraft’s hull replenish “health” to 50 percent should you take more damage than that threshold.

Unlocking these things is costly and cannot be undone. You’ll want to make sure that you’re choosing the right plane and loadout for the job. Certain aircraft are good for particular roles due to the limited special weapons they can carry. For instance, the F/A-18F “Super Hornet” can have long-range air-to-surface missiles, perfect for missions where you face naval forces. Others don’t have certain missile/bomb types, so you’ll need to switch accordingly.

As you get deeper into the aircraft tree, you’ll find that some aircraft and components might require millions of points. The X-02S “Strike Wyvern” — the one I’ve recently unlocked — is a whopping two million (and that doesn’t even count all that I’ve spent to get there). Don’t worry, though, as all of these can be obtained in-game with time and effort. There are no microtransactions whatsoever.

Additional customizations for your aircraft include skins and emblems. You’ll unlock these options once you finish the campaign. 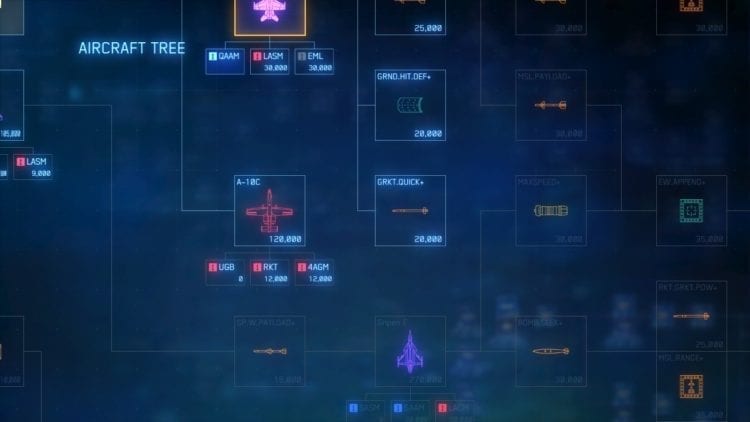 The Aircraft Tree. You’ll need to unlock prerequisite nodes and points can’t be refunded, so plan ahead.

I’ve only played a couple of matches for multiplayer. Given that the game doesn’t launch for a couple of weeks, there aren’t too many people around. I was fortunate enough to find one while doing this review.

It turns out, my opponent was a writer from another site who was also reviewing the game. The player was using one of the low-tier aircraft (the F4-E Phantom II) against my decked-out F-22A Raptor, which has quick-maneuver air-to-air missiles (QAAM) with increased range. The results were quite lopsided, hence why I advised my opponent to finish the game (and thereby obtain more points throughout the campaign). That should be step one for any PC players looking to get an edge in multiplayer.

Online multiplayer has two modes — Team Deathmatch and Battle Royale. The latter isn’t a variation of Fortnite or PUBG, it’s just a fancy name for Free-for-all. You can choose from seven maps, allow hot-seat joining, and even select maximum allowances for aircraft load-outs.

You can use the aircraft you’ve obtained in the campaign, as well as their load-outs/upgrades for multiplayer. In fact, there are also boosts that are available for multiplayer only, even ones that increase the number of points you gain.

As I noticed, the only way to chat in multiplayer was via canned radio messages like “Hey there” or “Great game.” It looks like your best bet, especially when playing TDM, is still to use Discord. 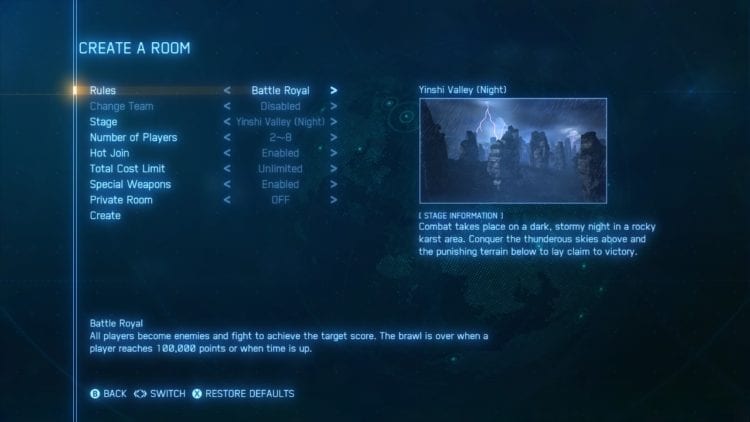 Creating a room for multiplayer matches.

Ace Combat 7: Skies Unknown has some obvious flaws. As mentioned, the story does seem tacked on, with unnecessary twists and uninspiring characters. Likewise, the AI of your allies (and their piloting capabilities) leaves a lot to be desired. The targeting system can also be a bit janky. One incorrect press of a button and you’ll have to cycle through multiple blips even with a target right in front of you. Multiplayer, even at this stage, may also become a problem given that the meta would likely revolve on only a handful of special weapons and upgrades.

Still, Ace Combat 7: Skies Unknown is a visually stunning addition to the franchise that’s filled to the brim with action. Bandai Namco have outdone themselves with their latest offering. Aircraft controls are tight, and animations are fluid. Graphics and audio are crisp. Explosions and kills are satisfying, and the environment becomes a factor in its own right.

Without spoiling anything major, perhaps the finale of the campaign might serve as the stepping stone for the franchise’s future. Who knows, we could eventually see “Space Combat: Galaxy Unknown” in the future. For now, though, if combat flight games are your fancy, then Ace Combat 7: Skies Unknown, with its frantic dogfights and brilliant encounters will let you rule the skies. It launches for consoles today but will arrive on PCs via Steam on February 1. If you’d like to go more in-depth with graphics, performance, and controls, feel free to check out our technical review as well.

Though not without flaws, Ace Combat 7: Skies Unknown manages to deliver an awe-inspiring and action-packed experience.