World War II is drawing to a close. The Nazis are losing, but two secret organizations within the Third Reich are out to draw the otherworldly denizens and cosmic horrors from H.P. Lovecraft’s Cthulhu Mythos. Entering the fray are four brave soldiers who go behind enemy lines not knowing what awaits them. It’s Achtung! Cthulhu Tactics, a turn-based strategy and tactics game from Auroch Digital and Ripstone. It’s also based on a tabletop board game. Oh, and in spite of the plot and board game basis, you’ll definitely see some similarities with other TBS/tactical games such as XCOM, right down to the overwatch mechanic. 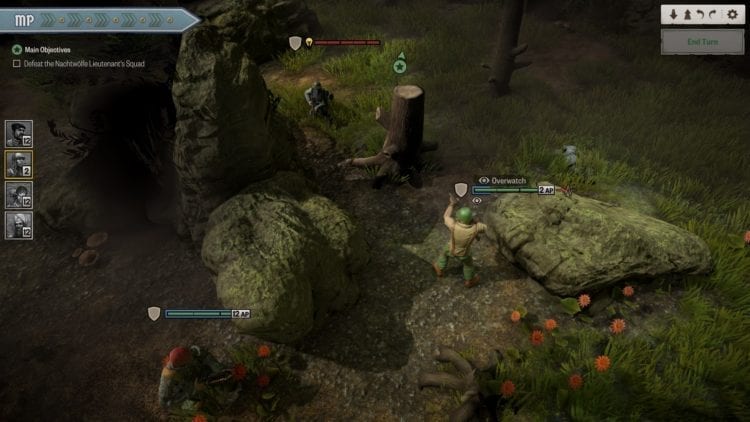 That overwatch mechanic, and especially the icon, are eerily similar to XCOM‘s. It’s likely that the developers, Auroch Digital, took a lot of inspiration from the franchise. Other features – such as basic abilities and skills, cycling through enemies, and choosing your actions – are all reminiscent of Firaxis’ blockbuster hits.

The difference, though, lies in the overall presentation and the features that Achtung! Cthulhu Tactics has. Absolutely no one is expecting XCOM levels of polish or content, and that’s totally fine. Cthulhu Tactics can deliver on other fronts, right?

Well, it does have some fairly original takes other than the plot. For instance, you’ve got a conal view representing your line of sight. You can choose the direction your characters are facing after they’ve moved. This allows you to spot when enemies run across your view. If enemies haven’t been spotted yet, they’ll remain as shadowy outlines on the edge of the map. You’ll suffer accuracy penalties if you try to shoot them without revealing them first.

You’ve also got the Momentum feature, which gets filled up whenever you get kills or crits against enemies. Momentum is different from Action Points or AP (a staple of turn-based tactical games). Whereas AP is used for movement and shooting and isn’t replenished until a turn ends (or via a specific ability), Momentum can be continuously gained based on your performance in battles. 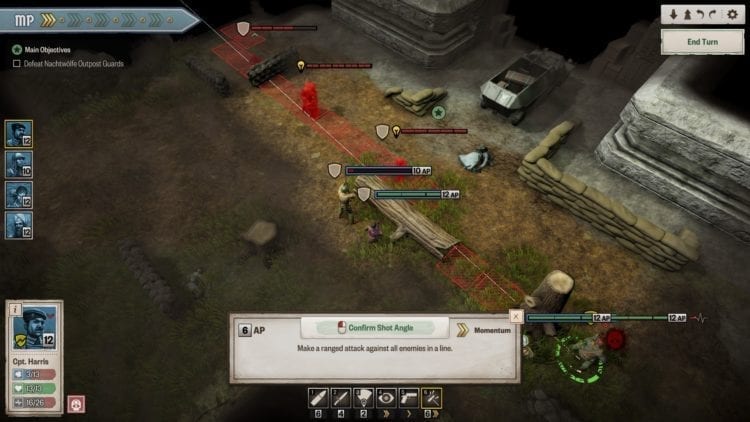 Compared to XCOM or other turn-based tactical RPGs, Achtung! Cthulhu Tactics is a lot more action-oriented. Because of Momentum and Action Point management, you can start your turn by discovering your enemies. Next, the three gentlemen in your squad start shooting everything (you generally get to shoot your primary weapon twice per turn depending on your Action Points). Then, your female pistol specialist can use the Double Tap ability until her AP’s spent. This can actually be abused. The ability costs one Momentum, but if you hit with both shots you gain two points. Using Momentum, you can perform additional actions with any squadmate such as shooting your secondary weapon, revealing more enemies in your line of sight, reviving teammates, and going into overwatch among other things.

Other abilities are also fun to use. One is the Overpenetrate ability seen above, which targets all enemies in a straight line (perfect for narrow corridors). Your pistol specialist, Ariane Dubois (she’s a member of the French Resistance), can also continuously shoot anything in her line of sight when you put her on overwatch. There’s another character (Singh) who used shotguns by default, and I ended up changing him to a pistol specialist as well.

And that’s precisely where combat in Achtung! Cthulhu Tactics falls flat. There’s little to no skill management involved. There are skills that are an absolute necessity, and there are those that are completely useless. I barely noticed the Willpower stat or any skill that can debuff enemies or increase your defense against Cthulhu Mythos creatures. They were almost unnecessary. 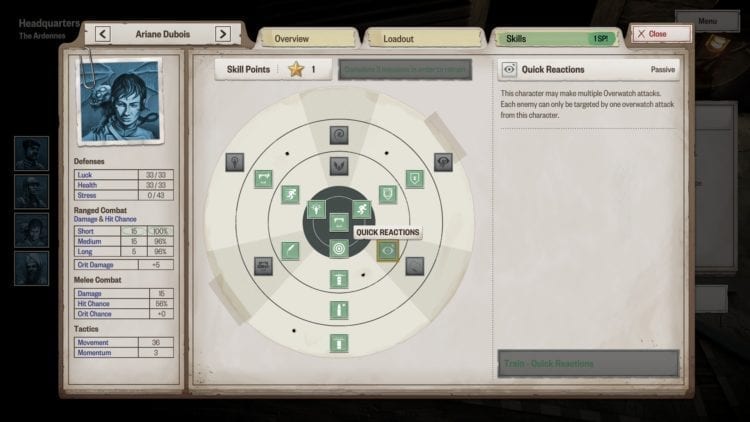 Speaking of the Cthulhu Mythos, maybe you’re expecting more minions of Cthulhu or Nyarlathotep to show up, right? Maybe some extra terrors from H.P. Lovecraft’s mind? Unfortunately, the only ones that the Nazis can summon are humanoid hybrid abominations and Shoggoths (which you can see in the featured image above). The Shoggoth barely attacks. The most it can do is crawl on its bubbly, blobby self to try and scare you. And it can have that effect when Stress comes into play. When you get hit often, when a teammate dies, or if you let those Shoggoths cuddle up to you for several rounds, you lose your sanity — and gain Stress. There are adverse effects such as randomly reloading (good), shooting an enemy (great), or losing half your AP (bad). To date, I’ve not had a particular incident where my characters shot their own squadmates.

They might as well do that, though, because your squadmates are about as bland as someone who goes to a Cthulhu party dressed up as a squid. The only one that stood out — barely — was Dubois, as she’s the only female in the group. Including the French heroine, your four-person squad is the A-Team minus the personality. You can’t change their skill trees (they’re fixed), or the types of weapons they can equip (ie. Dubois and Singh can only choose between a shotgun or a pistol). That generally wouldn’t matter since you can’t find additional weapon types anyway besides those two, the Blevin Carbine (Captain Harris), and a choice between a Thompson or Bren (Sergeant Carter). No snipers. No M1 Garands. The only Panzerfaust you pick up is for the boss fight in the end.

Previous artwork also depicted a Native American pathfinder fighting alongside you. Well, he’s not in the game. A future DLC or free-LC, perhaps? 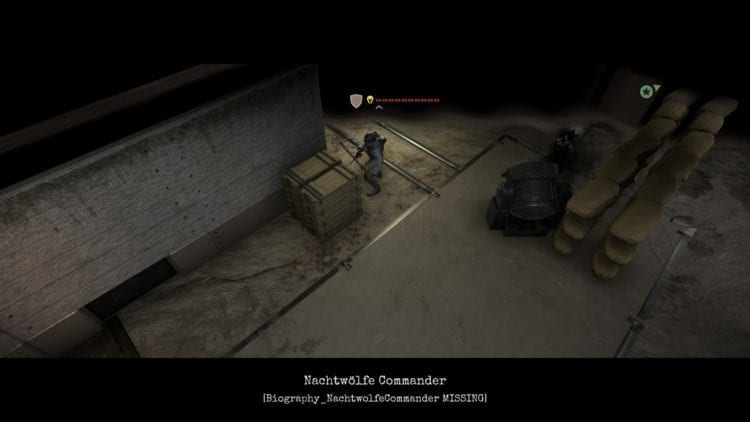 That image above is a particularly surprising blooper for a Nachtwolfe (Night Wolf) Commander with his biography missing. But that’s fairly minor. Another minor quibble happened a few times during my playthrough, and that’s when the animations lagged for several seconds while characters were shooting at enemies via overwatch. It’s worth noting that I did not experience any crashes or performance issues outside of these instances.

However, the most pressing issue with Achtung! Cthulhu Tactics at the moment is the core gameplay. It’s just a dungeon crawl — as in you’re just going from dungeon to dungeon, room to room. You pick a side mission or a story mission. There are ten story missions and roughly the same number of side missions. All in all, you’re looking at ten to twelve hours of playtime.

Most of that, however, is just the aforementioned repetitive dungeon crawl. The team explores, and when you’re close to enemies, that’s when combat starts. It’s like an RPG with random encounters in dungeons followed by turn-based mechanics. When you’re done with the mission, you pick another one while a short briefing tells you what’s going on. Lather, rinse, repeat. Since you don’t get any other characters, skills, or weapons apart from the ones you’ve been assigned from the start, that makes for a fairly monotonous slog. 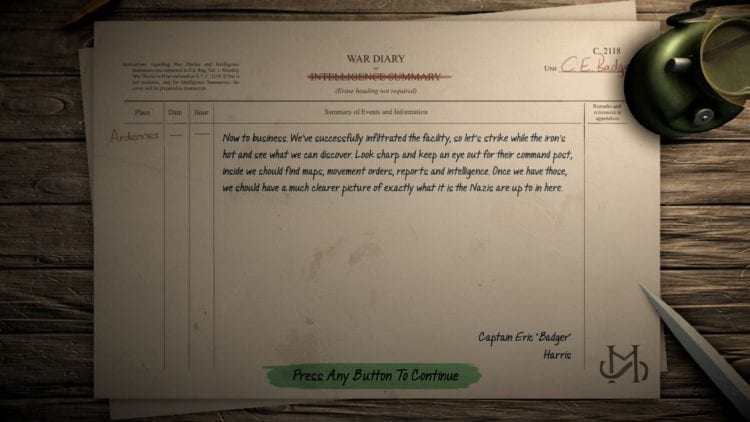 Some players might enjoy this type of gameplay. It’s user-friendly and easy to learn, but there’s no challenge or mastery involved. The game just throws dozens of Nazis or creatures your way, and you just answer with pistol shots or laser-like carbine blasts. The closest I came to a team wipe was during Story Mission 8 when I nonchalantly walked towards a bunch of Nazis and abominations in a ritual hall. Now that was a surprise, and that’s something Achtung! Cthulhu Tactics could use more often.

There are some positives. The missions and map environments can be repetitive, but the layout is acceptable — although I would have preferred it if the developers added more collectibles or items in nooks and crannies. These would be a lot better than just interacting with some inactive servitor or flipping a switch. A few tweaks to the skill trees, additional characters, more enemy types from Lovecraft’s universe, and perhaps even a level/map editor would be welcome inclusions to the game as well.

As it stands right now, Achtung! Cthulhu Tactics isn’t so much of a R’lyeh. It’s more like a R’lmeh.

A dungeon crawl with turn-based mechanics. Shows a lot of promise but is ultimately bogged down by repetitive combat and shallow character/skill system.