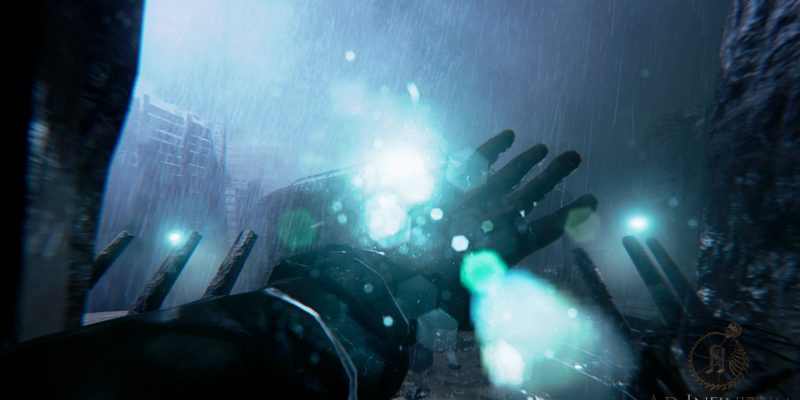 Oftentimes, developers reveal games early only to refrain from showing more information for years on end, which usually happens due to development issues. Ad Infinitum, a survival horror game made by developer Hekate, represents one such case. The studio initially revealed the game back in 2015 and has since shared scant information about it. Today, Hekate finally broke their radio silence, as a new teaser trailer revealed at the Nacon Connect 2021 live stream event confirmed that Ad Infinitum is still in the works.

Being a teaser trailer, it showed a brief cinematic with no gameplay in sight. The camera zooms out to reveal a war-torn environment with a soldier’s corpse hanging over barbed wire. After some time, the hands of an unknown creature take the body out of sight before the camera zooms out to show more of the battlefield. Wrecked vehicles and more dead bodies begin to reveal themselves until the camera stops at Ad Infinitum’s title and logo, which depicts a serpentine-like skeleton with a soldier’s skull forming a circle.

What is Ad Infinitum?

Ad Infinitum’s Steam page describes the game as a psychological horror title set in the middle of World War I. Players take control of “a German soldier haunted by the horrors of the Great War” as they come across “terrible creatures, death traps, and insane mysteries.” Players must best these frightening hurdles “to save [their] soul[s] and tear the veil of more sinister truths.”

In an otherwise fairly tame live stream, the Ad Infinitum re-reveal trailer stands out as the most significant news to come from Nacon’s event. Those who have looked forward to the game ever since 2015 will no doubt feel relieved that it will come out after all this time. That said, players still have to wait quite some time before they get to try the game out, as Hekate plans to release it sometime during 2023.

Vampire: The Masquerade – Swansong delayed to 2022, gets character trailer