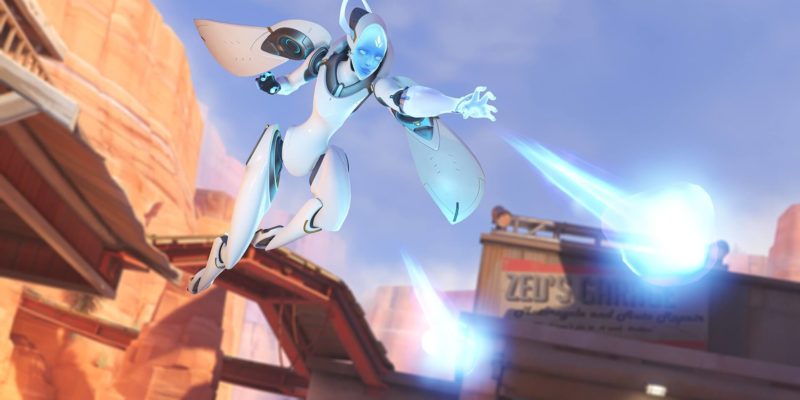 Echo, the much anticipated final character for Overwatch, has finally come online. She is primarily a damage dealer, but her ultimate ability allows her to adjust to almost any situation. Echo is the last hero being added to the game’s roster until the release of Overwatch 2. However, her fresh style should give players plenty to experiment with until then.

Echo’s arrival as a playable character in Overwatch is accompanied by a cinematic gameplay trailer that shows off all of the multi-role adaptive robot’s abilities. That includes her already iconic ultimate, Duplicate. You can check the trailer out below.

One of the most notable things about Echo is that she is one of the few characters in Overwatch who can fly freely. This allows her to take up unique positions in a fight or reach enemies in elevated positions. She can also glide while falling, much like Mercy.

Her primary fire shoots three projectiles out of her fingers and is, accurately, called Tri-shot. She can also fire a volley of Sticky Bombs that detonate after a brief time. Echo is excellent at pressing an advantage and finishing off weak enemies with her Focusing Beam, which deals higher damage to enemies with less than 50% health.

Echo’s final ability is her most impressive: Duplicate. This allows her to copy the look and abilities of another character. Do you need a shield? Use it on Reinhardt or Orisa. More healing required? Copy Ana. If you want to go full Miley Cyrus on your enemies, copy Wrecking Ball.

Echo certainly isn’t going to be the easiest character to master in Overwatch. But for those who can think quickly and understand exactly what their team needs from them, she’ll be a devastating tool.

You can learn a bit more about the friendly artificial intelligence and her backstory on her Overwatch character page.