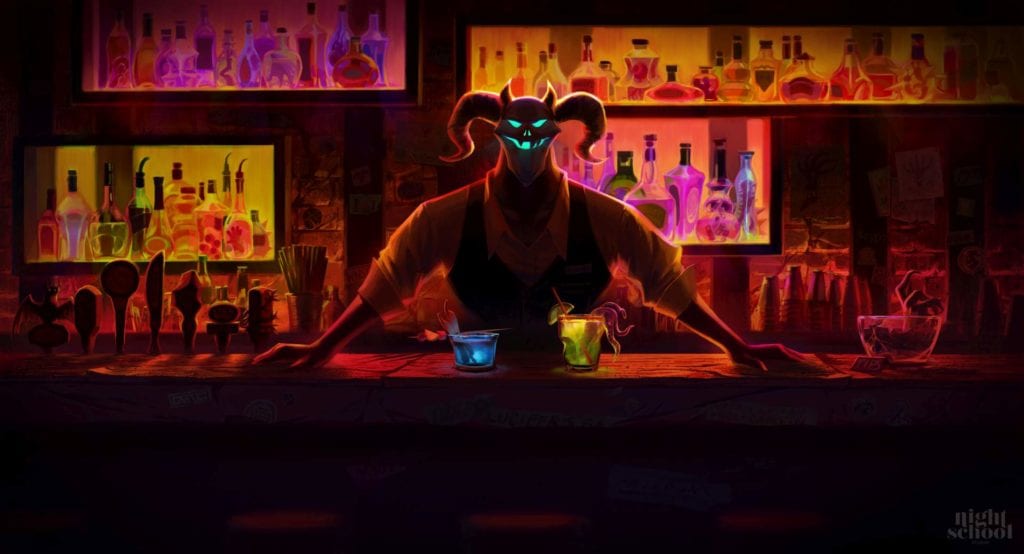 Hell is often depicted as a place of brimstone, fire, and despair, but rarely is it ever seen as party central. Afterparty, a new adventure game developed by Oxenfree creator Night School, reimagines Hell as a downtown city district where demons mingle with human souls and get drunk before returning to the tedious job of torturing.

You play as Milo and Lola, best friends who are so painfully co-dependent that even Hell more-or-less regards them as a single person. Milo is socially awkward while Lola is angry and cynical. Both tend to cut each other down in some passive-aggressive ways but still remain friends nonetheless. Both lives were suddenly cut short before they graduated college, and now they need to find a way to escape Hell before they’re doomed to an eternity of torture.

Fortunately, Hell has a little loophole. Anyone who can beat Satan in a drinking contest can return to Earth with a second chance at life. But it turns out challenging the Prince of Darkness (aka the Prince of Parties) to a drink-off isn’t a straightforward endeavor. The far-fetched plan takes the two friends on a bar crawl across Hell, where they meet new characters, solve puzzles, endure some mental torture from a personal demon, and drink a lot of booze. Hell of an Afterparty

Similar to Oxenfree, the game puts heavy emphasis on dialogue choices with a handful of mini-games sprinkled in. Situations present players with two dialogue choices that sometimes amount to the same response but with a different emotional flavor, which may impact characters in different ways.

The twist is that players can order alcoholic beverages from the plethora of underworld bars, which will open a third dialogue choice. But not every mix gives the same result. One concoction will make you mean, another will make you crack terrible jokes, and another still will make you talk like a pirate. Players don’t necessarily have to use these dialogue options or do much drinking at all, but they may come in handy when trying to get through different situations. If nothing else, they’re often good for a laugh.

I only wish that there were a greater variety of special drinks. Sometimes, only two or three drinks will offer specialized dialogue choices like being flirty, psychotic, or an insufferable smartass. The rest will simply get you drunk, which have identical effects. 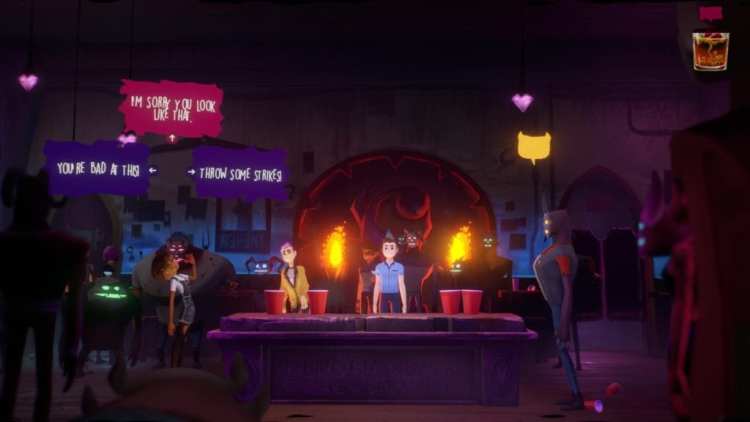 As with any drinking game, smack-talking is a key strategy.

There’s also no way to try out a drink in casual conversation. Lola and Milo always order the same drink and almost all the dialogue is in direct service to the plot. Although there are a couple of instances where a character will offer to refresh your beverage, these are rare instances. Usually, there’s no way to change things up if you suddenly decide that you’d rather be a pirate.

However, the voice acting is so good that these issues are easily overlooked. Afterparty has a fantastic cast of characters who expertly work in jokes that break the fourth wall like, “Yeah, try again. Why waste time reloading, right?”

All the while, hellish social media messages will appear on the screen, which are funny until they start repeating.

Choices made often impact how the story plays out. For example, there’s a part where Milo and Lola need to get past a bouncer, and they’re presented with two choices. They can either instigate two patrons into fighting each other to distract the bouncer, or they can play a round of beer pong against a demon to get invited to the party. Either method will work, but the choice will impact how the story plays out in the end.

Unlike in some other adventure games, solutions tend to present themselves quickly and in obvious ways. In most cases, Milo or Lola will outright spell out your options. The game isn’t shy about holding your hand or afraid of being too linear. One task requires you to get approval from two lords of Hell, and there just happen to be only two available. The others are either too busy or on vacation. 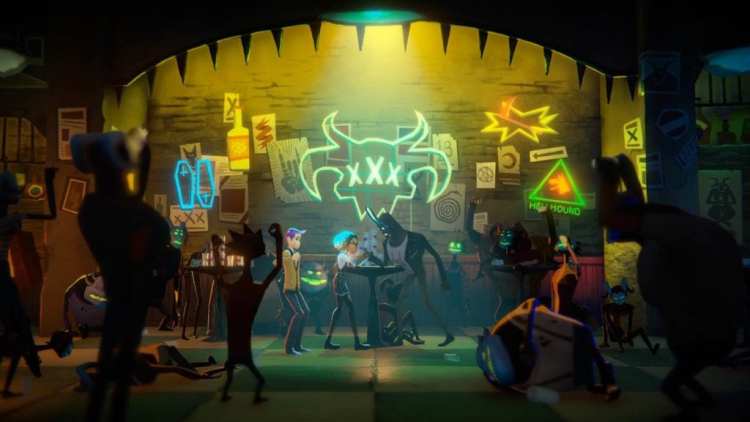 There also doesn’t seem to be a way to completely fail. Even when playing beer pong with the game’s somewhat awkward physics, the NPC will suddenly become terrible at the game, giving you plenty of second chances. At one point, I had trouble understanding how a drinking game worked and lost against one of the lords, but she gave me her approval anyway because she liked me for some plot-driven reason.

Afterparty isn’t a very challenging game, and I ended up breezing through the mini-games and puzzles. But throwing a ton of puzzles with obscure solutions isn’t the point of the game. It’s all about the journey – getting to know Milo and Lola, shaping their relationship, and meeting the different denizens of Hell.

The ease and speed of these solutions keeps the pace of the game going. It’s almost impossible to get stuck in the game and halt the progress toward your boozy throwdown. But at the same time, things can be a bit rushed. For instance, there was one part when our cab driver Sam was explaining how all the religions of the world got the afterlife a little bit right but a lot wrong, which I thought was interesting. But listening to these monologues usually means having to stand still as they play out. Or else they’ll be cut short once you reach your destination.

However, the two might be rooted to one area if one of them starts monologuing. Usually, these instances reveal something about their personalities and history together, leading to choices that will impact their relationship. But they can be a bit disruptive, like an occasion when Lola suddenly became upset because Milo once asked some annoying girl out, and neither I nor the character understood where the resentment was coming from.

Doing shots with the devil

Afterparty fully embraces its weird, offbeat premise with crazy situations, and that’s what makes it so enjoyable. It’s not a difficult game by any stretch, but it’s one that encourages replays to see how different choices and drinks play out. The game has devilish charm and wit topped off with some sweet plot twists, making it well worth the time to play.

It's well worth giving in to temptation partying with the devil by throwing back a few drinks in Afterparty. The game isn't very long or difficult, but it makes up for it with plenty of wit and charm.

Death Stranding is coming to PC in 2020