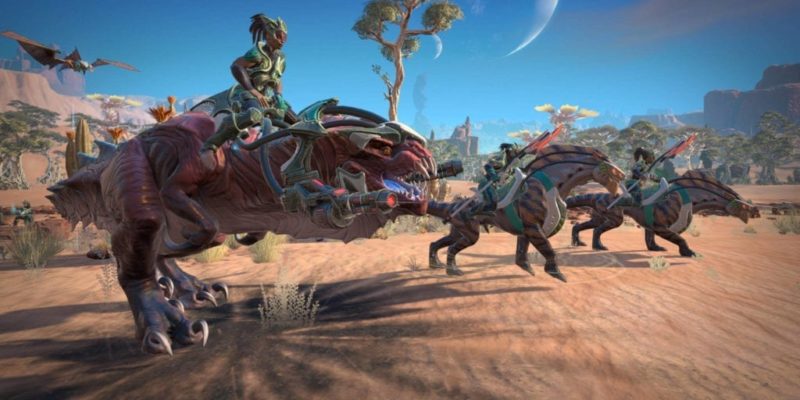 An on-stage interview with the developers of Age of Wonders: Planetfall at the E3 PC Gaming Show dove into some of the details of the new science fiction turn for the Age of Wonders series. A new E3 trailer also announced an August 6 release date for the game.

The game begins with the titular planetfall. Your chosen faction crashes on a planet that was once part of a galactic empire but has since fallen to chaos and ruin. From there, your faction will expand out and encounter the wacky variety of science fiction locales and characters the world has to offer.

Among the spotlighted factions were vanguard mech riders, strange cyborgs, and laser-toting dinosaur riders. These presumably will take their place alongside the other factions that have previously been announced in faction highlight trailers.

Once your faction begins to spread out across the world, you will interact with the tech tree. This will include both general and faction-specific tech. The faction-specific techs include secret technologies that will add flavor to your faction by altering their future and character. Among the general tech are doomsday technologies that will alter the world in drastic ways, messing with both time and space.

Finally, the developers explained that the zoomed-in, tactical turn-based combat previously seen in the Age of Wonders series will include indoor areas in Planetfall, as well as the outdoor areas seen in the previous games.