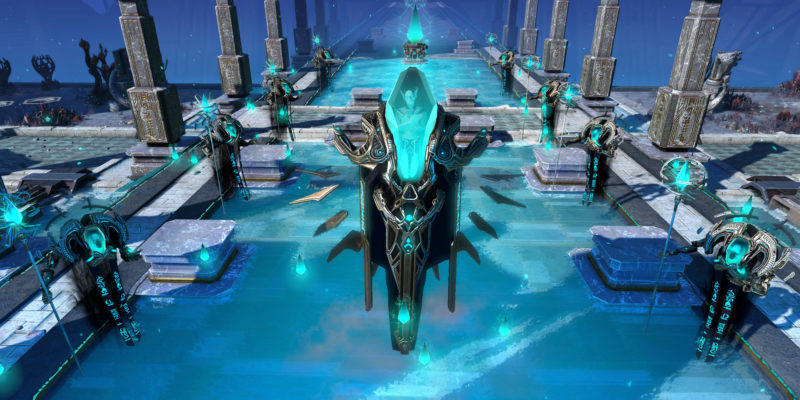 Triumph Studios eschewed the high-fantasy aesthetics of the Age of Wonders franchise with the release of Planetfall. However, certain themes did remain even with the sci-fi focus. In the new Revelations expansion, you’ll be tasked with awakening the Es’teq Dynasty through their scions. Players will wield the Heritor secret tech, encounter the Forgotten NPC faction, and delve into archaeological dig sites in vast Tomb Worlds. So, how does the Age of Wonders: Planetfall – Revelations expansion fare? Let’s find out in our review.

Note: You can also check out our official review of the base game and our Age of Wonders: Planetfall guides and features hub.

In Age of Wonders: Planetfall‘s campaign, you controlled a variety of alien factions in their attempts to survive and expand in worlds once controlled by the Star Union. The galactic confederacy had collapsed, and it was up to you to pick up the pieces.

The Revelations expansion follows this narrative, although there’s a slight twist. You play as Marlok Tenor, last of a dying Syndicate house who’s also on the run. Tenor is aided by a Kir’ko companion, Hatyl Es’ran, who convinces him that there’s an ancient race that can grant them unlimited power. The Es’teq Dynasty, which ruled planets well before the rise of the Star Union, keep untold treasures. Although Tenor and Es’ran start with premade abilities (Syndicate/Kir’ko and Voidtech), they’ll soon gain newfound attributes as they encounter remnants of the Es’teq.

The campaign this time around is more intricately woven. Though only a couple of lengthy missions exist, they’re expected to last you around 10 hours. You might even spot some well-known characters (from the base game’s campaign) popping up to either help or hinder Tenor’s journey. There are also a few moments which allow you to find different means of completing objectives whether diplomatically, with force, or through additional exploration. 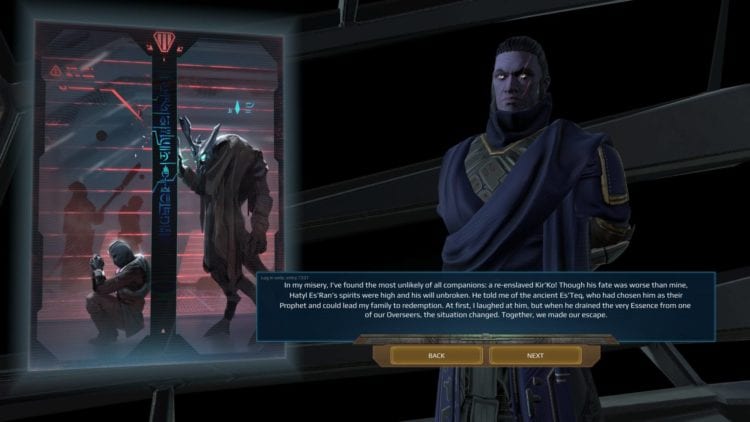 The Es’teq, the Heritor secret tech, and the Forgotten

Although it takes a while to unravel the mysteries of the Es’teq, you’ll be able to experience Revelations‘ Heritor mechanics quite early. If you choose the commander customization or scenario modes, you can quickly pick the Heritor secret tech for your playthrough.

The Heritor secret tech uses dual mechanics of Entropy, a new damage type that’s also deadly versus machine units, and Essence Charges. Essences, in this case, are the life force of combatants. Your Heritor or Entropy-based attacks and some defensive skills drain essence from opponents. You’re then provided an Essence Charge. These charges are used to bolster your offensive and defensive capabilities. Certain skills amplify your resistance the more essences you have, or you can unleash collected charges to deal massive damage. There are also new hazards such as the Essence Gash which can be detrimental for non-Heritor units, but these can also be exploited by Heritor-types by “devouring” them for bonuses.

Heritor secret techs might remind you of existing ones from the Synthesis, Celestian, or Xenophage branches. For instance, the Communion perk links various units allowing them to be targetted by buffs (a bit like Integration or Enlightened effects). There’s even an operation that lets you condemn units to become the “Drained” once they die. These soulless constructs stay with your army after battles (sort of like Xenophage critters minus the mutation ability), and they can use Entropy attacks. 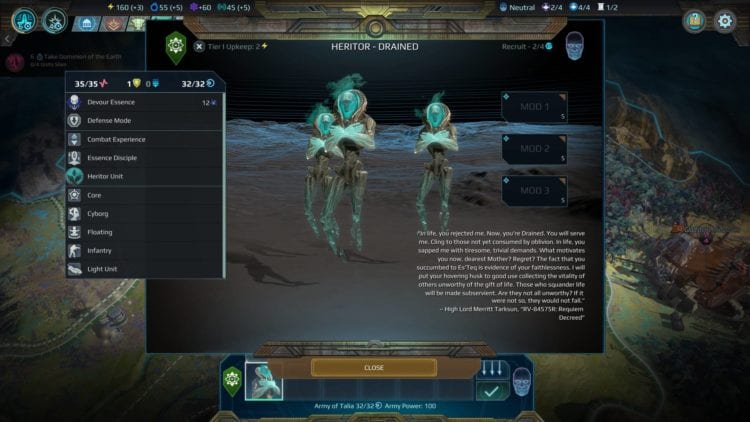 While the usage of Entropy and Essence Charge mechanics is limited to Heritor-created units or mod applications, this capability is present in all Forgotten units from the get-go. The Forgotten are a new NPC race in Revelations that, story-wise, had been deemed unfit by the Es’teq and were discarded.

Should you be able to do their quests or buddy up with them, you can gain unique units and mods that bolster your use of Entropy attacks. Available Forgotten units include the beefy Golem, the floating Serpion, and the Eater of the Dead. These should complement your armies led by high-tier units such as the Heritor High Lord. 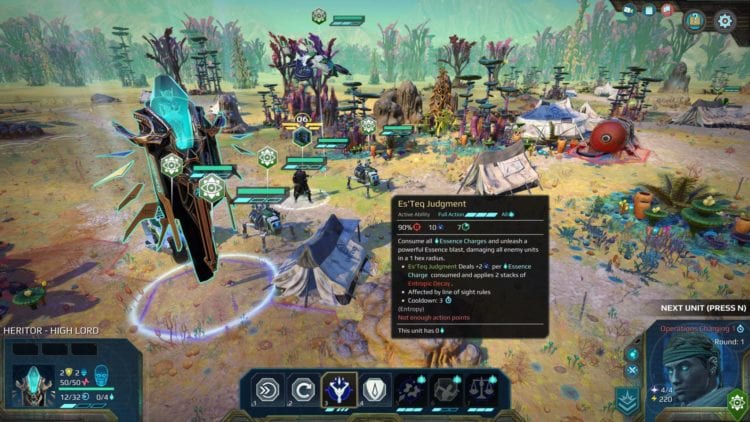 Another major new feature in Age of Wonders: Planetfall – Revelations is the introduction of archaeological dig sites. Remember how the Es’teq once held the galaxy in their grip and how their power had been lost? Well, you’ll be able to find these types of anomalies all over the map.

Only armies led by your commander or recruited heroes can explore these sites. In fact, additional hero skills pertaining specifically to archaeological digs have been added. These skills reduce the turns needed to explore sites or increase the bonuses you obtain. Bonuses range from additional resources, free units, experience points, and knowledge/research. It’s quite possible to gain free techs easily just by exploring these locations. 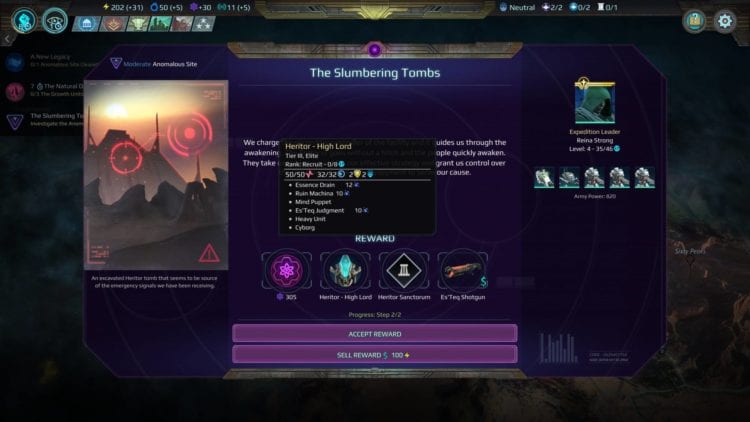 There’s just one major downside with Revelations‘ feature: the aforementioned commander/hero requirement. Even with archaeology-related skills that require a few level-ups, you’re still going to play the waiting game before you can hit jackpot. As such, your exploration can get stunted quickly. You’re waiting for several turns until the process is finished, and your best armies or characters can’t move. At times, it’s worth detaching all your other units freely while your hero stays on the spot. But, this also presents problems given that (a) your on-site units gain exp whenever a site is fully cleared anyway, and (b) there could be a battle with an enemy army that awaits.

This doesn’t seem to gel well with the rest of Age of Wonders: Planetfall‘s 4X mechanics. Since you’ll still have numerous sidequests and objectives, including those from NPC factions, you’ll often find yourself stretched too thin. Given that you’re also waiting additional turns for heroes to be recruited, you could be instantly grabbing the next hero that comes along. This includes those that aren’t too helpful for your forces since you desperately need a new character to check those sites. You can think of this as akin to Civilization‘s tribal villages or archeological sites mechanic. The difference is that you’re limited to specific units and that unit has to be the most valuable one you have, all while most of your forces are tied down for several turns as well. 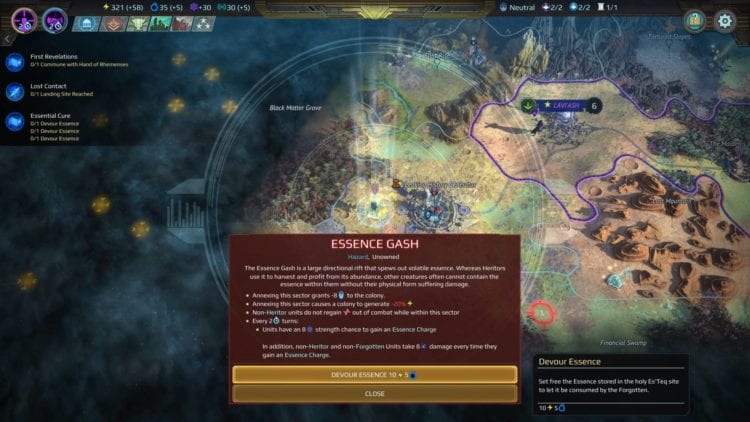 The Revelations expansion campaign is a worthy addition to Age of Wonders: Planetfall‘s narrative. Likewise, the Heritor secret tech and Entropy/Essence Charge mechanics are sure to be a treat for fans looking to find synergies. I’ve practiced with various combinations using the Vanguard, Syndicate, and Amazons to devastating effect.

You’ll also be able to face off against wandering “Reapers,” cyborg constructs that are designed to wipe out all traces of the Es’teq and Heritors. You may even spot dangerous wildlife such as the Megasow and bio-engineered piglets. Yes, alien piglets. Selecting the new Tomb World skirmish scenario presents a questline that you can experience. Your pals and opponents can even partake in this questline via multiplayer.

Sadly, the other major component in Revelations — archaeological/tomb sites — is both a hit and a miss. They can be some of the most rewarding locations that you’ll find in the game. But, you won’t know the actual rewards you’ll earn until the end once the process is completed. If you do wish to reload an earlier save, the same issues from the base game are still around. The annoying notifications that required you to check your research or annexed sector again after reloading? Those are still here. Technical issues such as crashes can also be a nuisance. One scenario I was playing always crashed whenever a specific Marauder army attacked my colony. Granted, this happened on turn 12. Had this constantly happened much later during a run, anyone would be greatly inconvenienced.

These anomalies will also have you rethinking the overall concepts of the 4X genre. Explore, expand, exploit, and exterminate require a new balancing act if some of your best armies are usually tied down. When you combine this with numerous objectives and quests that only have a limited number of turns for you to complete, most especially during the campaign, then it becomes an unnecessarily frantic and messy race against time. 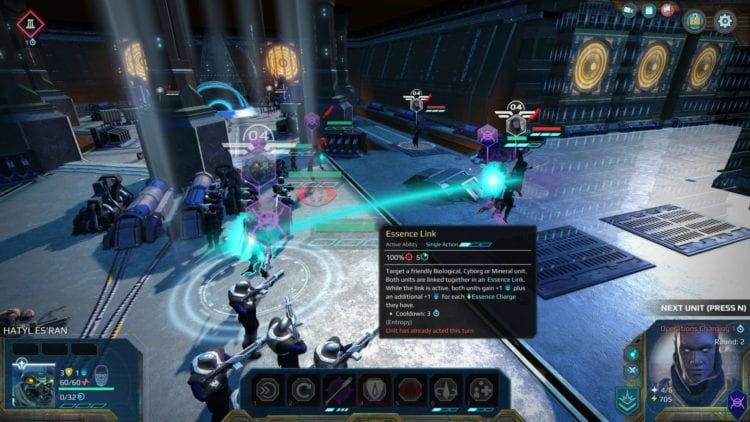 Age of Wonders: Planetfall – Revelations releases on November 19 and you can find it via Steam. Those who purchased the season pass will have access to this content as well. You can also check out our guides and features hub for more information.

The first expansion for Age of Wonders: Planetfall adding the Heritor secret tech and a short campaign to awaken an ancient dynasty.
7

Some technical issues still exist and delving deep into mysterious sites doesn't mesh well with the overall gameplay. However, Age of Wonders: Planetfall - Revelations does present an engaging campaign. Likewise, its unique mechanics such as the Heritor secret tech and Forgotten faction's use of Entropy weapons are worth a try.

By A.K Rahming22 hours ago
Previews