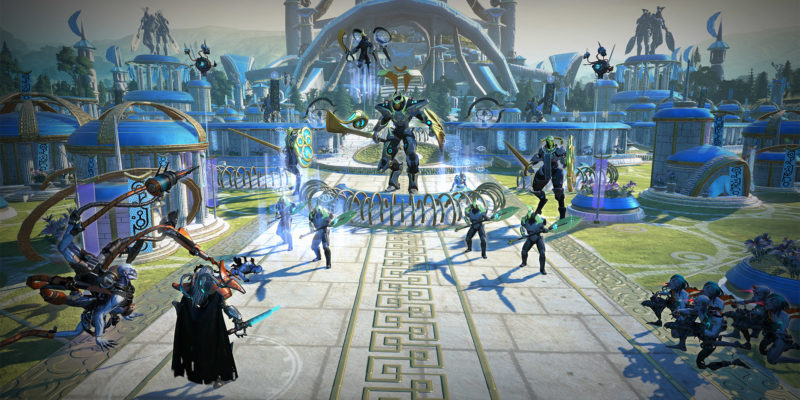 A little over a year since its release, Age of Wonders: Planetfall has its third and final expansion, Star Kings. Among other things, it adds the Oathbound faction to your roster and they have some unique capabilities.

While you can check them out via a regular skirmish, the Oathbound have their own campaign (a part of which turned me off from the get-go). So, is Age of Wonders: Planetfall – Star Kings worth your while? Let’s find out.

Age of Wonders: Planetfall – Star Kings‘ featured faction is the Oathbound. It’s a race of noble paladins who are out to bring justice and peace to the land. Think of them as sci-fi knights (and they have some fantasy-inspired mecha power armor to boot).

This noble cause actually becomes integral to how you’ll play as the Oathbound due to their boosts to Influence and Reputation. Consequently, it’s also something I ended up disliking during the faction’s campaign. 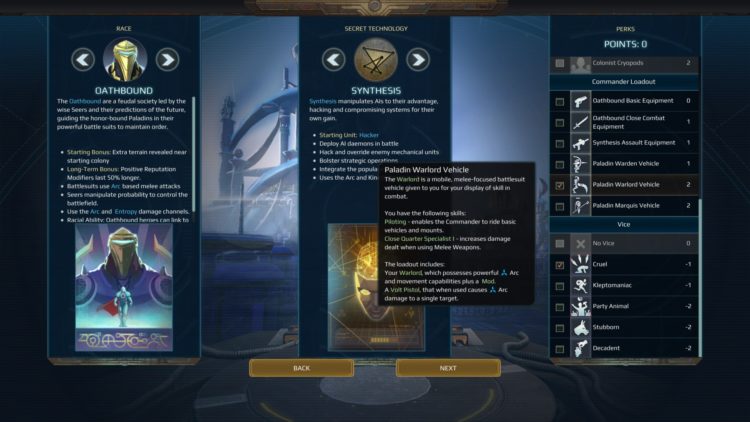 Maybe I’m in the minority here, but I never truly play Age of Wonders: Planetfall to focus on the diplomatic aspects. Every game often has a lot of enemies around. As such, you’re likely to war against and decimate everyone you encounter. The exception would be that odd non-playable race that happens to have a decent mod or unit that’s beneficial to your troops.

In Star Kings, however, the Oathbound campaign already has a requirement for you to gain 600 reputation in total which means buddying up with others, giving gifts, playing nice, and enacting treaties. Again, that’s all well and good for various playthroughs. But, as a mandatory goal, it’s probably not something I’m keen on going for. After a couple dozen turns, I realized the campaign didn’t really entice me. Instead, I just played several skirmish games to try and make the most of the Oathbound’s capabilities given the more open-ended nature of skirmishes. 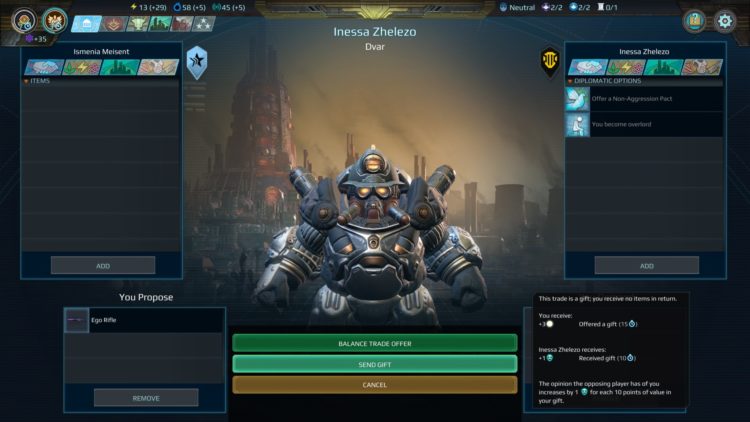 Where Age of Wonders: Planetfall – Star Kings shines though, is how Oathbound heroes and units function. I mentioned that the vehicles are akin to giant mechs running around, and they’re quite a treat to behold during battles.

Next, your heroes serve an additional function outside of battles — they can be lords or ladies of a colony. This is done by going to the hero’s panel and selecting a settlement that you want them to control. Moreover, they can have a “Colony Lord” perk that boosts food, research, or production for that settlement if they’re within that colony’s domain. Likewise, there’s a unique building called the Throne that lets settlements have 50% of a hero’s boons even if they’re further away. 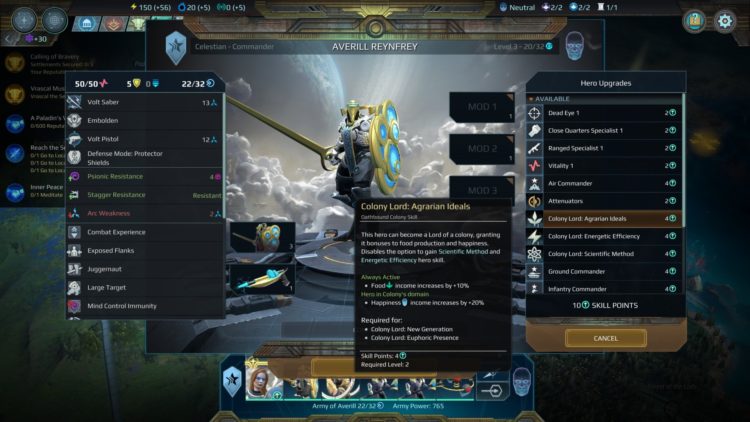 From peasants to power armor and precognition

But, it doesn’t stop there because Oathbound units tend to have strong potential, too. The starter units (Paladin Aspirants) might as well be called sci-fi Bretonnian peasants because of how weak they are. However, you’ll soon gain some unique perks.

Firstly, if you can manage to level them up to prime rank, an operation lets them turn into higher tier units (i.e., Paladin Wardens or Paladin Protectors). These are the aforementioned mecha suit fighters that are quite powerful. You can recruit them, too, if you have the resources. 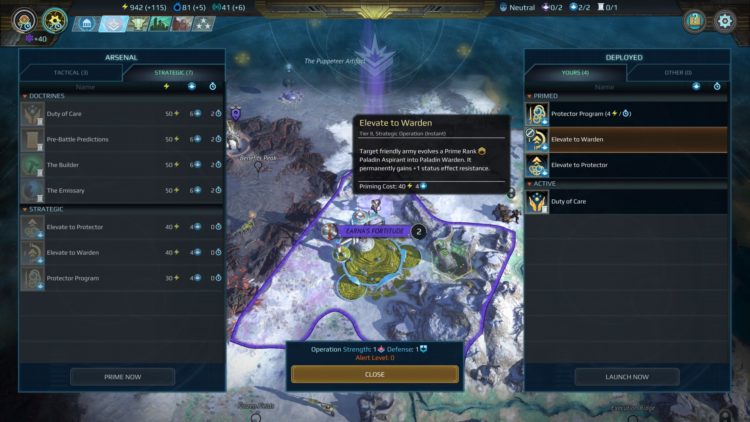 Next up is the game-changing mechanic: Precognition. This buff is obtained via Scryer/Watcher skills or operations and it grants units some ridiculous bonuses. By default, it lets them negate one direct damage attack from any foe. When Precognition is active and used in conjunction with other perks like Intuitive Strikes, you’ll gain some nifty attack boons. There’s even a unit called the Diviner which grants Precognition to all friendlies around it.

Furthermore, there are various odds and ends, mostly to boost defenses or increase survivability. For instance, the Launch Healing Banner operation heals all friendlies around it and then heals a random allied unit that’s further away. Meanwhile, the Diviner can either cast a healing ability or resurrect a dead unit. As for the Paladin Protector (including militia/garrison defenders), its regular “end turn” button pops a defensive bubble around it and its allies. 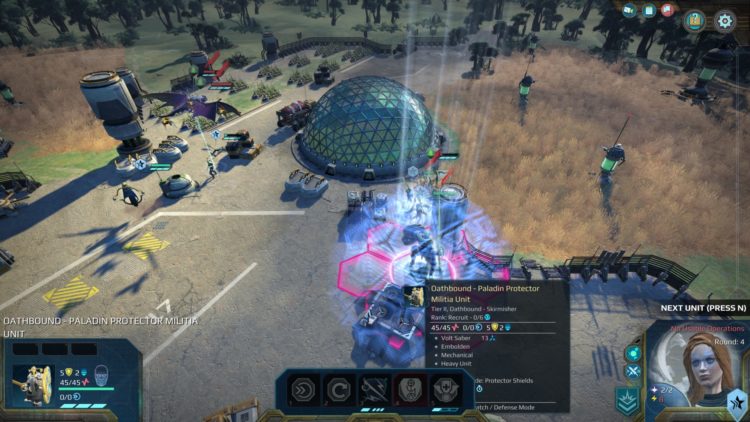 Other additions to Age of Wonders: Planetfall – Star Kings

In addition to the above, Age of Wonders: Planetfall – Star Kings has a couple of tidbits for you to check out during matches. For instance, Grail Configurations, are landmarks that confer powerful boons to the faction that controls it. Ideally, you should change your game settings so that these appear a lot earlier. You’ll save some time since there are a few quest steps and missions that are required to unlock Grail Configurations.

Likewise, there are three new wildlife groups: the vampiric rock creatures called Psionica, the disgraced Oathbound known as Apostates, and cybernetically-enhanced mushrooms called Mycelians. Just to be clear, these are not NPC factions (i.e., Spacers, Autonom, Paragon, and the like). They’re just possible mobs that can be encountered and fought. 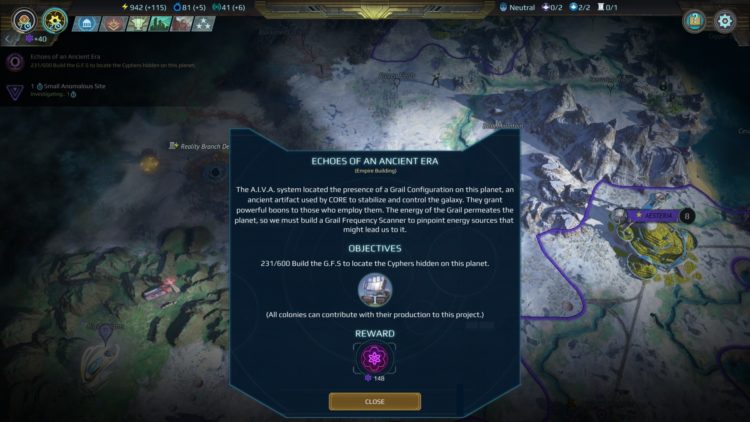 Is it worth your while?

Personally, I feel that Age of Wonders: Planetfall – Star Kings is just up to par with the previous expansions — Revelations and Invasions. The former added the Heritor secret tech and the latter gave us the Shakarn race. As of now, I actually prefer the Oathbound faction to the Shakarn, even if the space lizards have cool espionage capabilities. The Oathbound units have strong potential and great synergy with certain secret techs like Synthesis.

The problem is that Age of Wonders: Planetfall – Star Kings‘ other features (Grail Configurations and wildlife types) are so forgettable that your interest will solely hinge on how much you like the Oathbound faction. 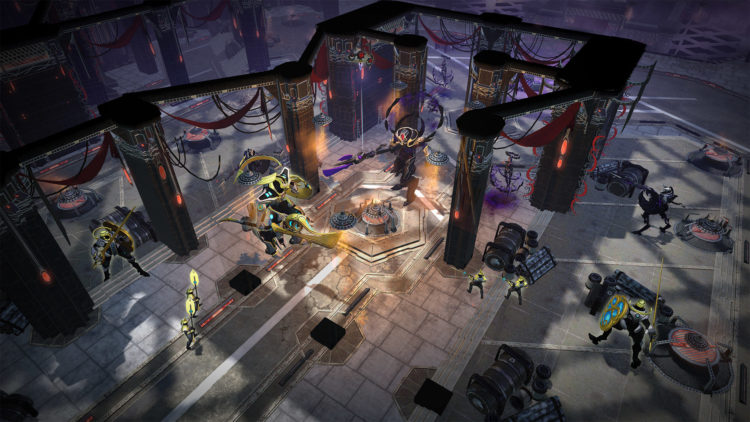 Now, for those who aren’t planning on getting it, there’s still the free Triceratops update that coincides with Star Kings‘ release. This one adds the Galactic Empire mode. It allows you to create a custom faction for use in the game. Your faction can have several heroes from various races so that you can switch to others when you play on different worlds.

You also unlock more mods and units as you progress, turning Galactic Empire mode into a highly customizable sandbox. Imagine an Oathbound commander leading Kir’ko and Vanguard units with Xenoplague and Heritor mods. That seems astounding, right? This is likely to be one of the more popular modes for Age of Wonders: Planetfall, even if it’s a free content drop that’s separate from the Star Kings expansion. It’s a good way to cap off your experience with the game a year after it launched. 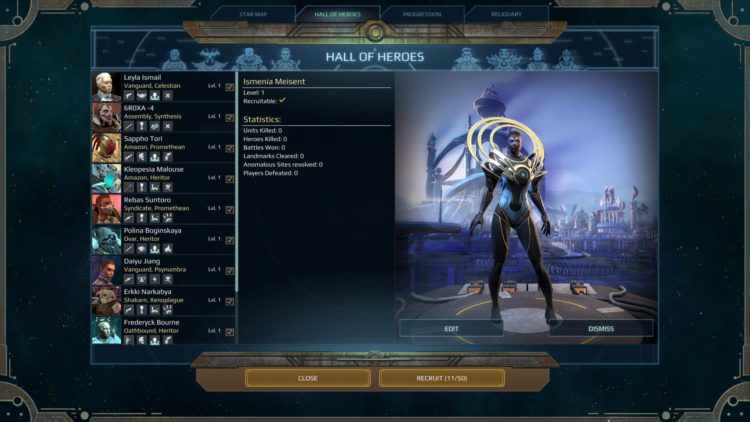 If you do decide to grab Age of Wonders: Planetfall – Star Kings, you can find it on Steam. For more information, check out our guides and features hub.