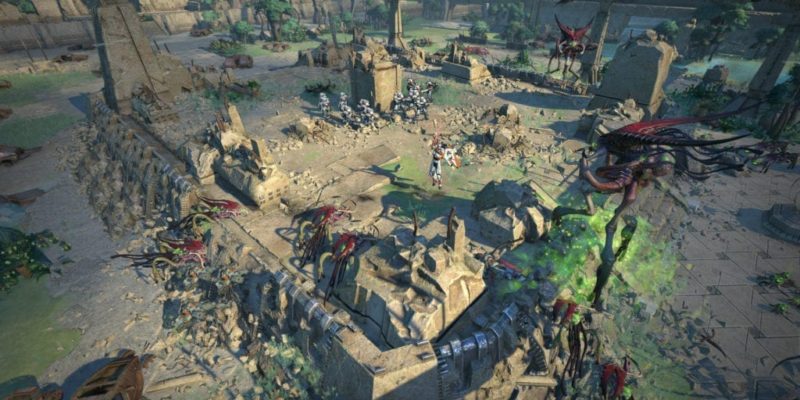 Age of Wonders: Planetfall is Triumph Studios’ newest 4X strategy game. With a fresh new coat of paint that foregoes the high fantasy themes of previous titles, it’s set to take you to new worlds bringing a dash of futuristic art style and sci-fi narratives. Will this new coat of paint be more than enough? Or will it fade faster than you can click that end turn button? Let’s find out in our technical review.

Note: For our official/scored review of Age of Wonders: Planetfall, you can head over here. 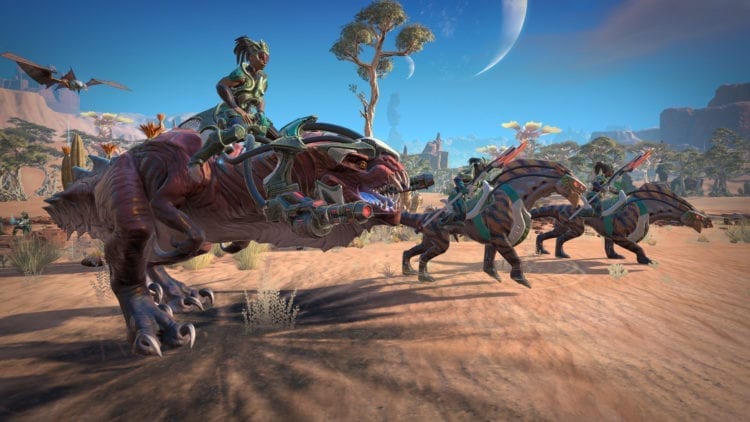 One thing you might notice about Age of Wonders: Planetfall‘s system requirements is that you’re going to need a 64-bit OS from the get-go as well. Anyway, I’m well above the recommended specs, so let’s move on with our tech review. 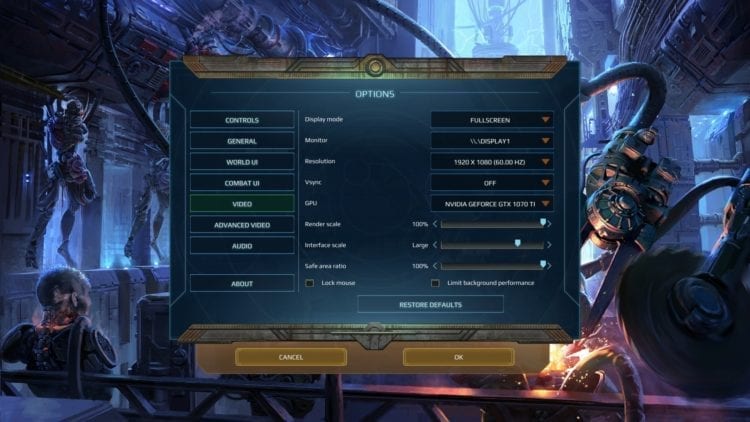 Age of Wonders: Planetfall only has a smattering of graphics options even under the advanced category. You’ll be able to select your display as well as scale the rendering of objects or the interface itself.

For the advanced graphics options, you’ll see the various presets from Low to Ultra. You’ve also got texture quality, shadow quality, SSAO quality, and the usual — anti-aliasing, soft particles, bloom, and reflections — which can only be toggled on or off.

Performance-wise, I did not experience any major issues such as slowdowns or crashes. I didn’t notice any stuttering or freezes even when using the Ultra preset. 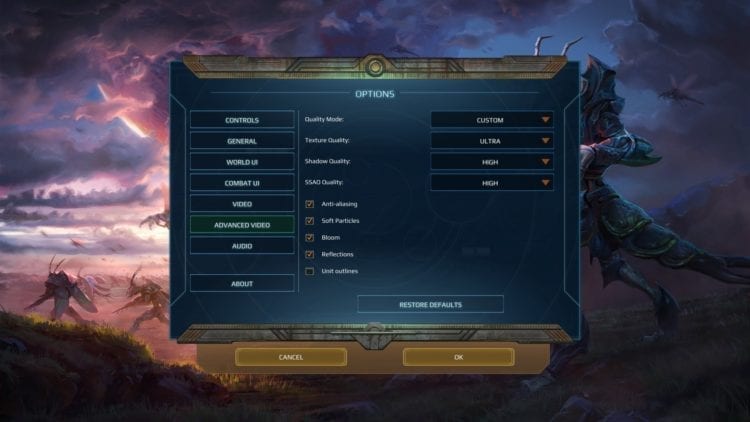 For this part, I’ve got three sets of screenshots based on two graphics presets: Low and Ultra. Of course, you can click on each image for a larger view. 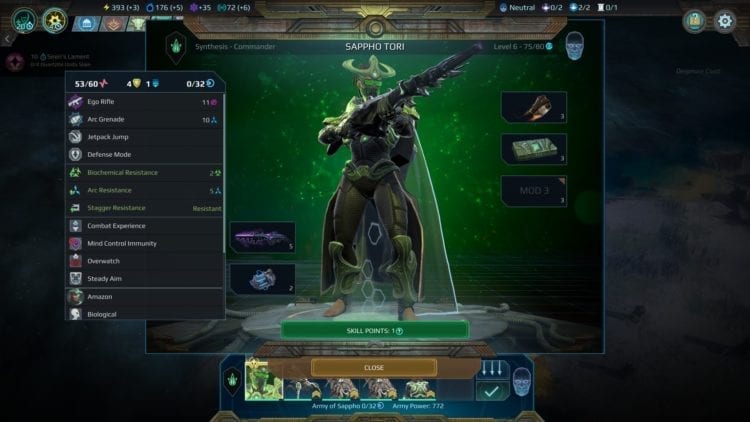 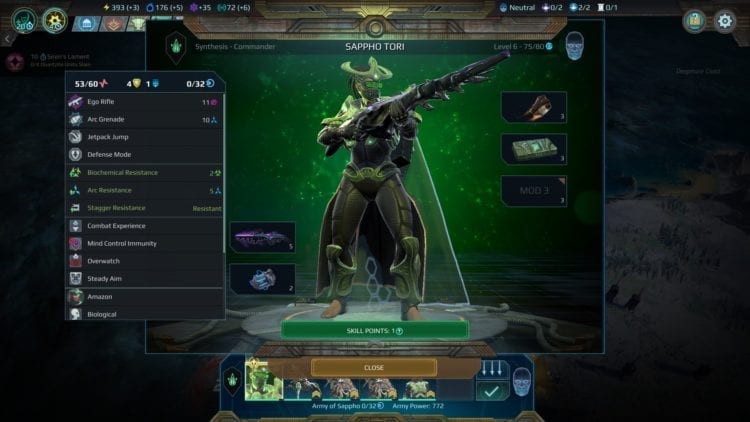 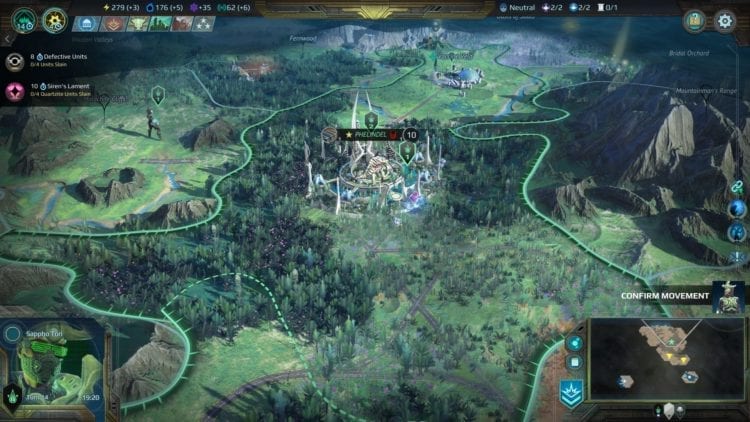 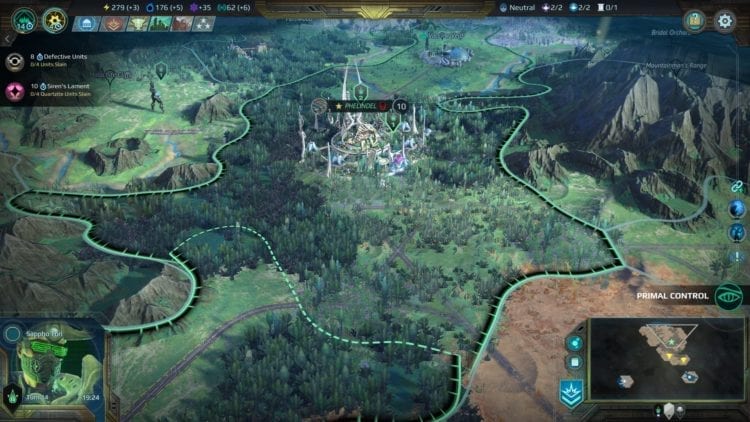 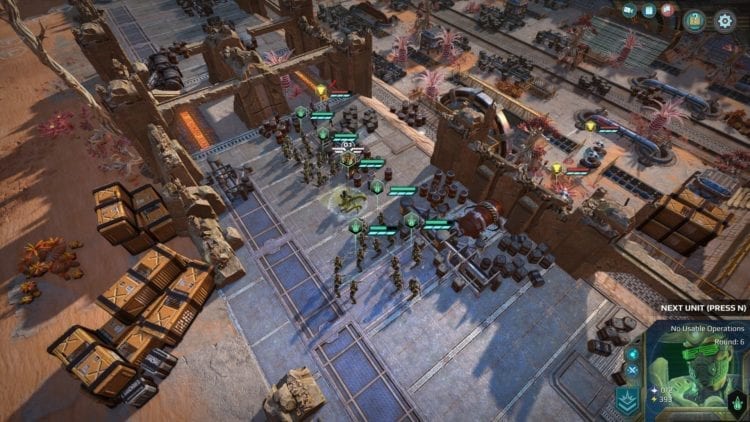 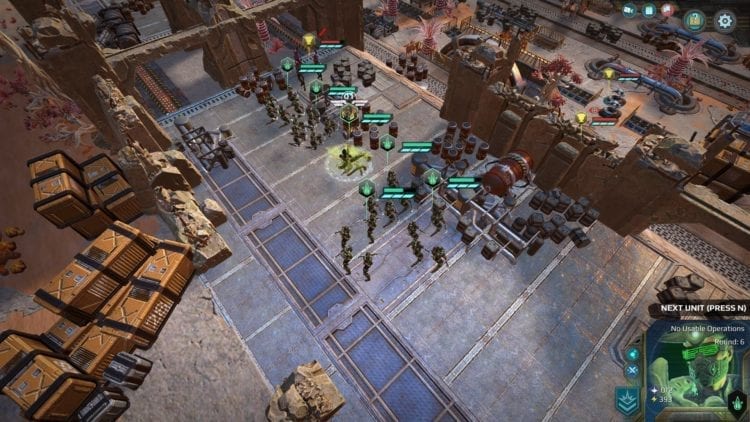 You’ll only notice a scant difference for both extremes in the graphics presets. The most noticeable would be the shadows and sharpness. Using the ultra graphics preset, Age of Wonders: Planetfall still looks a bit cartoony, but the visuals are still crisp. Character and object models may look somewhat blocky by design, but their edges are smoothened out.

At the lowest graphics settings, the edges of the character of object models might look frayed or too sharp in contrast to the environment. The same goes for shadows which can even flicker as you pan the camera.

For Age of Wonders: Planetfall‘s gameplay options, you’ve got your means of changing the language and advisor help frequency. There’s also the settings for autosaves, manual, and cloud saves. 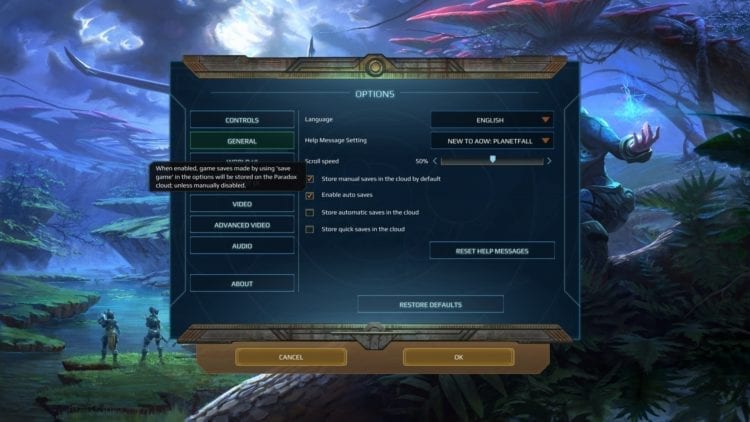 In Age of Wonders: Planetfall, you’ve got a couple of interface menus. The first one is for the World UI which as movement animation, movement confirmation, a confirmation for skipping turns, and the like. If you want to speed up the game, you can disable those three I mentioned above since that’ll eliminate those precious seconds spent just clicking notifications.

There is, however, one downside as also mentioned in our official review. Apparently, it might be due to all the skipping that’s going on. Sometimes, the end turn button might stop working. 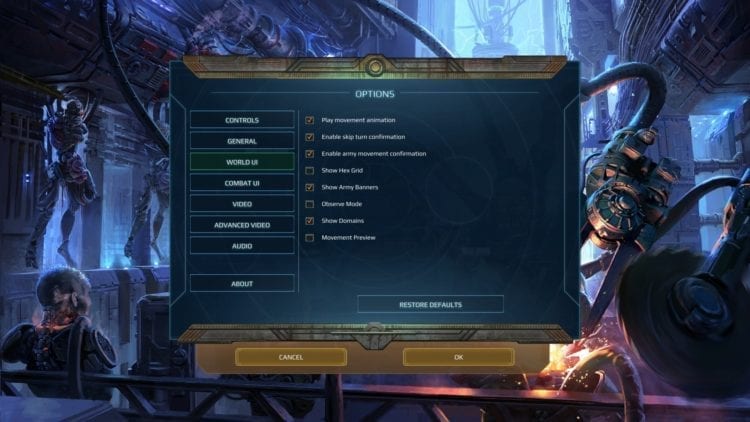 The second interface menu is for the Combat UI. Right here, you’ve got your damage numbers or “floaties,” tactical action camera, and others which you can toggle off. What you might want to really turn off would be the “Tactical Combat Introduction.” Each time you fight a battle manually, there’d be a short intro that just pans around the battlefield and your units. You won’t need this all throughout after seeing it happen a few times. 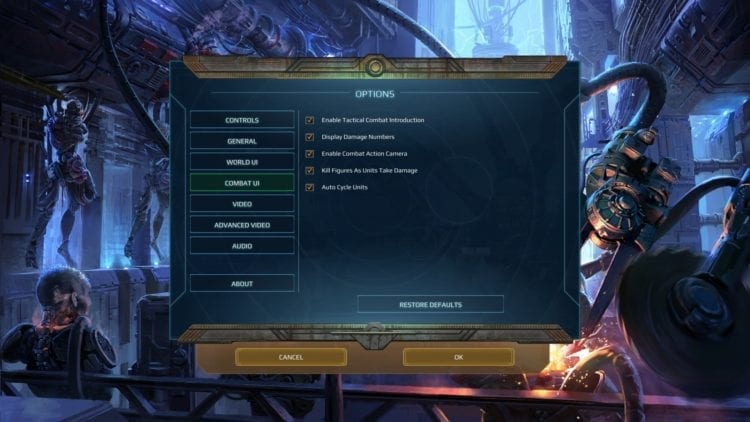 Age of Wonders: Planetfall features a couple of control schemes. As with many 4X and strategy games out there, using your mouse and keyboard is a given. You can change your binds accordingly. 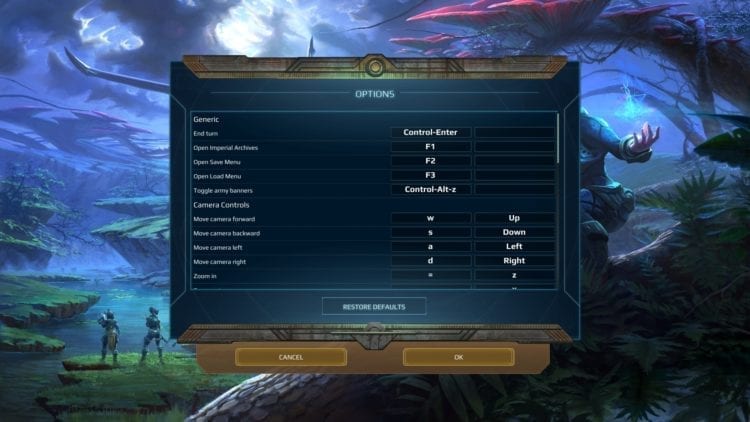 Age of Wonders: Planetfall also lets you use a gamepad to play. Now, keep in mind that you can only pick one control scheme at a time. This means that you can’t use the keyboard to pan the camera and then your gamepad’s button to commit to an action. One control scheme won’t even work for the menus if the other one is active — ie. if you enable your gamepad, then you can’t use your keyboard or mouse to disable anything in the menu, you still need to use your gamepad. 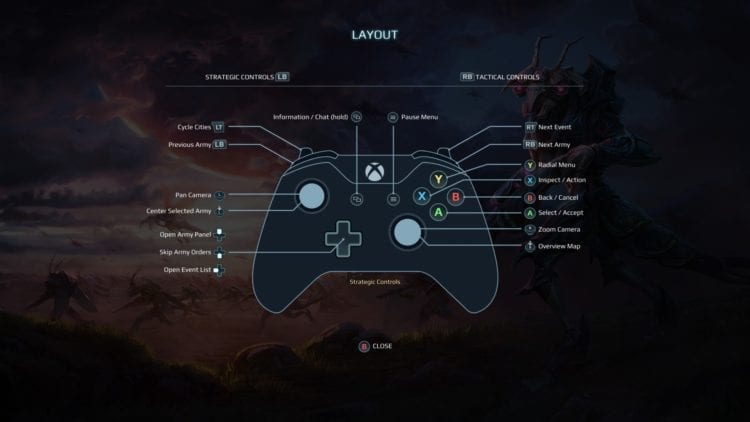 I found Age of Wonders: Planetfall‘s gamepad support fairly functional. You move hexes with the left stick, you can swipe through notifications with the directional pad, and a radial menu shows you the various intricacies of your faction from diplomacy, cities, operations, and more.

It does what it needs to do without issues in the hour that I tried it out. However, since this is a 4X strategy game, I eventually had to switch back to a mouse and keyboard setup since that’s what I’ve been used to for this genre. 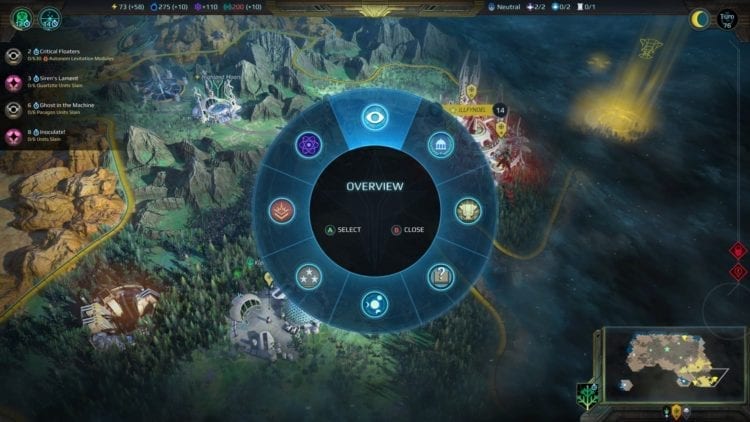 The radial menu in-game when you enable the gamepad controls.

One more thing of note about the interface is that you can scale the UI as mentioned. But, this is from the video settings. I’ve provided two screenshots showing the extremes — the smallest and largest settings for the UI. You be the judge. 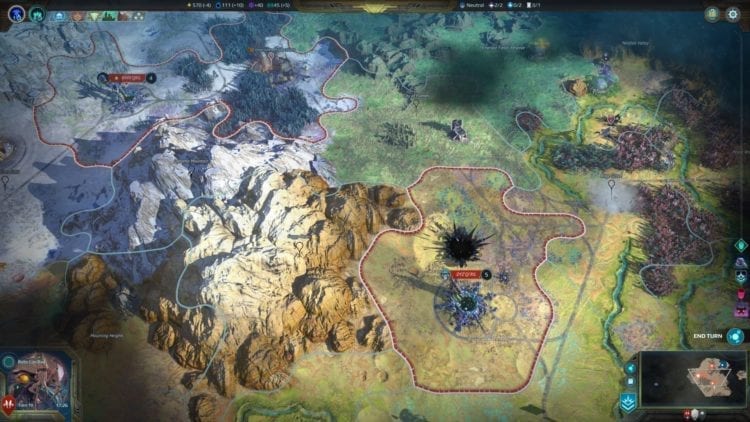 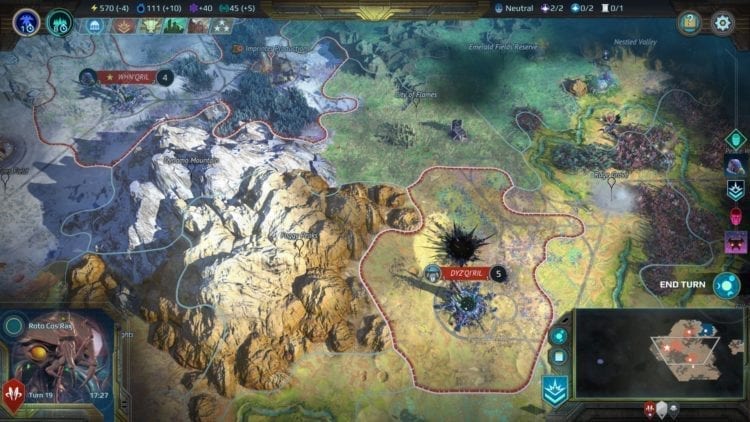 Finally, you’ve got Age of Wonders: Planetfall‘s audio settings. You’ve got scalable options for the master volume, as well as sound effects, events, unit banter, and more. Conspicuously absent are VOIP or voice chat options. Note that I haven’t tested the multiplayer content because I honestly couldn’t find a single public game. I’m guessing that it’s only text chat for now. 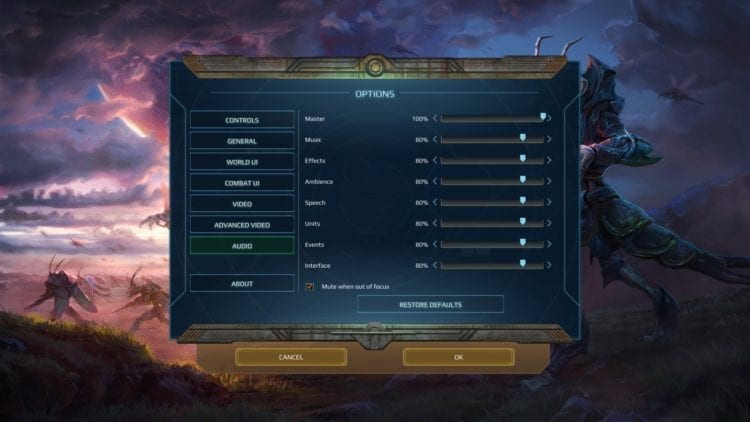 Age of Wonders: Planetfall may have a new coat of paint, but it still has its long-standing appeal for 4X strategy fans. Graphical options may be sparse, but it doesn’t detract from our review experience. It also doesn’t have any major issues when it comes to the visuals or performance, and the gamepad control scheme is functional (though the strategy gamer in me will always prefer the mouse and keyboard).

You can pick up Age of Wonders: Planetfall via its Steam store page. For our official review of the game, head right over here. For our guides and features hub which we’re slowly building, hop over to this page.