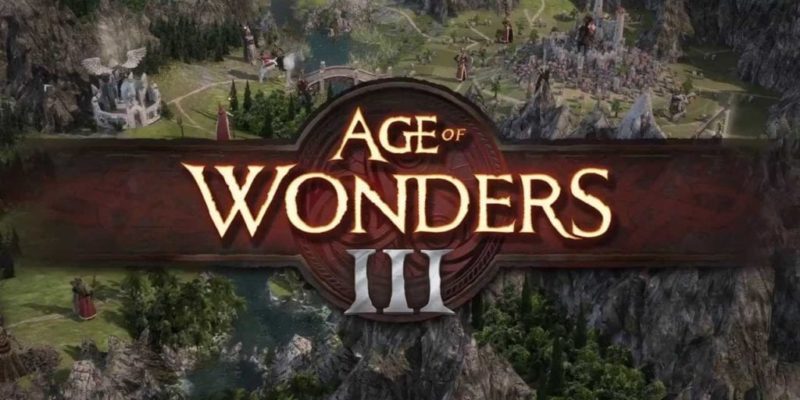 Update: Triumph Studios have mentioned that they’re looking for an alternate system for the Play by Email mode, so this won’t be supported at launch. Playing over LAN’s aren’ supported but still possible like the previous series and an Internet connection is required to initiate multiplayer.

It’s been a while since our Age of Wonders 3 interview. We’ve now had an opportunity to play an early press build of the game and can say Age of Wonders 3 is shaping up very nicely; for new players and veterans alike.

The release date is drawing nearer every day and despite the higher priority issues found by the many dedicated beta testers, the gameplay is, from my experience at least, quite smooth. I’m adjusting from my rose-tinted views of Age of Wonders II and embracing Age of Wonders 3’s expanded mechanics and changes. Do note that the press demo is already out of date and I can only base my experience based on that beta build only.

For those new to the turn-based Age of Wonders series, you pick a chosen or custom made leader from one of six RPG-style classes such as a Warlord, Rogue, Sorcerer etc. You’re then presented with a world map and the means to enhance your cities and empire by capturing (or purchasing) many different types of resource nodes. The resources are gold, mana and casting points, knowledge and production, with the last two affecting research rate and building rates respectively.

You can equip your character with a variety of magical items by crafting them, finding them around the world, or simply looting it from a former friend’s corpse. Levelling up your leader, heroes and units grants additional or enhanced abilities and stats in the usual RPG fashion. Your leaders gain upgrade points too, which you can use to obtain new abilities or improve further familiar stats like defense, resistance and damage.

To achieve ultimate victory you can produce armies consisting of up to 6 units and try to win through conquering or allying with other players/AI, or simply blast your opponents to bits with the wide library of spells available. There’s no economic victory as such, but this isn’t Europa Universalis, it’s more like Might and Magic Heroes 6 or Fallen Enchantress in its style of play. Both the world and battle maps are based on hexes, you can bring multiple armies into combat alongside your heroes and leader, and trade with players and AI by exchanging items, cities, resource nodes or spells.

There are also several multiplayer modes, both co-op and competitive. It’s possible to play online by LAN, locally via Hotseat and even by email (yep, it’s still viable even in this age.) Battles are turn-based only and the campaign mode can’t be played in co-op, but I’m pleased to see all game modes make a return and a variety of player circumstances catered for. Campaign co-op would be a bonus but may involve tricky changes to the story.

Turns can be taken in both single player and multiplayer as simultaneous with all AI and players acting at once, or fully turn-based (classic style). There are scenarios with scripted events like the previous series which expand upon Age of Wonders lore if you’re into that. An editor is also available for modding, but more on that later.

For veterans, Age of Wonders 3’s mechanics have been expanded. The depth and breadth of the strategy meta-game has been enhanced or adapted to fit the newer 3D graphics. For example, research is now knowledge. This resource’s rate can be improved through specific buildings and spells and also acts as an enabler over time to research empire-wide benefits that affect certain units, resources or buildings depending on what class and race you are.

Merchandise and housing benefits are much clearer as well; the units now have ‘types’ labelled in their details screen such as archers, irregular, support, monster etc, a bit like Warhammer Fantasy Battle. Units can still hide behind cover.

One change I don’t like is that ranged attacks cannot miss. If you’re using an archer unit they now have arcing shots, but still suffer a line of sight and ranged penalty for units behind walls and terrain, but for some reason they cannot miss outright. Nor can war machines like trebuchets, which I find rather odd, but this could be due to the visual representation of units in 3D form.

Leader classes are another new addition. No longer do you play a wizard confined to the highest point of your tower (throne) for safety and powerful casting benefits. The incentive to go into battle with your leader has increased to the point that it’s actually less risky and more balanced to do so.

Unlike AoWII, you can only have one throne. If your throne is not taken by the enemy and you’re slain, you will (for lack of a better RPG word) respawn back at your capital city after a couple of turns. While out of action, you can still produce pioneer types of units to build new cities, fortresses or watch towers.

Leader classes also enable you to produce unique unit’s specific to your leader, for example the Dreadnaught can have cannons, the Warlord can produce monster hunters (they look as cool as they sound), and Rogue leaders can produce assassins.

It’s good to see more units being added, it really adds some tactical variety. The downside is that these units are replicated across each race and only vary slightly per race in their abilities and stats. Triumph are still taking feedback on expanding and polishing the diversity and balance across all units, so expect this to be an ongoing change upon and after release.

Another major change is that you cannot cast with your leader after using your hero to cast in battle. As a long time player, I’ve had to take some of the new changes on the chin, this being one of them. When I asked Triumph about the decision, Lennart Sas replied with the following.

This was done to prevent a defending player from casting multiple spells in the first turn before their attacker could respond. Beta Testers reported this was a major problem in later game battles, where attacking stacks with multiple heroes was almost impossible. This should make both multi-player and single player a lot more balanced and nudging focus more toward the in-depth tactics of the game.

I’ve personally not come across this issue in the previous editions, preferring armies over the heroes to push forward in the game. But this is just one of several changes coming with Age of Wonders 3. Another big change is when your leader isn’t participating in the battle itself, his or her spells cost double the mana. According to Lennart, that’s because:

We want to encourage players to bring their leaders into battle, and when they do so, their spells are cheaper. If they want to cast spells into other battles, they cost twice as much, but we don’t want to force the leader to stay at home as well.

Unlike Might and Magic Heroes 6 where your leaders and heroes stay on the side-lines immune to damage (boo!), in Age of Wonders you get to directly control them in battle. As stated, this should provide players with more incentive to battle foes directly. After all, one could still bend the rules a little and stay on the outside of the combat with a Rogue class before heading in to finish the job with a backstab.

By A.K Rahming17 hours ago
Previews