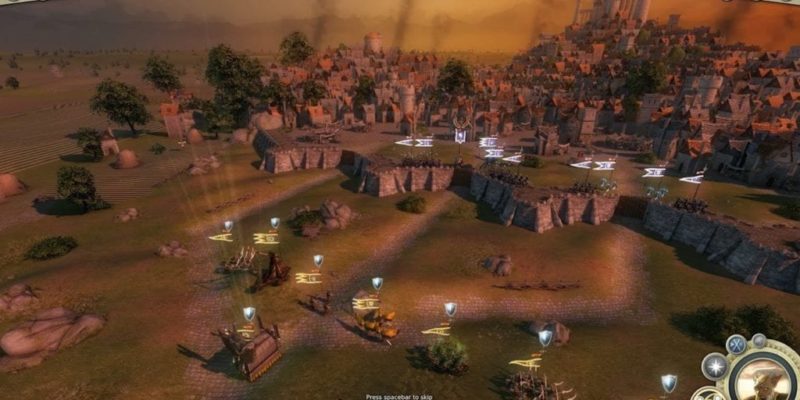 That is one shiny city.

Today, Triumph Studios has revealed the Theocrat class for the upcoming Age of Wonders III. Not just a simple healer class, the Theocrat is just as capable at dishing out the pain as other classes. So what’s so good about them? Well, apart from summoning scary sounding Cherubs (baby zombies), you can create a really strong righteous theme throughout your holy units and cities. They also have cool looking pauldrons and some of the Theocrat’s units can even resurrect themselves after battle just like in Age of Wonders II.

Holy Orcs are still nasty in cool those looking pauldrons.

One thing to note is that flying units can now be attacked by ground-based units as they now land, which a pretty large balance change compared to AoWII: Shadow Magic. One question I’ve wondered is whether you be an evil or unholy Theocrat, and the answer appears to be yes. Choices you make in-game e.g. razing cities to the ground or killing heroes who attempt to join you, will move your morale towards evil.

The gameplay trailer below shows off playing as the Theocrat up against a Sorcerer’s more elite units. It also shows off the latest improvements to the HUD from fan feedback in the beta forums.

Theocrats can also produce Martyr units which are capable of absorbing another allied unit’s damage, and the powerful Shrine of Smiting. Last time I wrote about those, they were very deadly if not in need of balancing a bit more.

If these two units are combined with global spell benefits such as Mark of the Heretic, it should allow for some very good damage potential. In addition, if you have any units in the battle that are devout, the Shrine of Smiting gains additional damage per devout unit in the battle.

If you’ve been able to test any of this out in the beta version, let me know in the comments below. Lots of players are currently praying, with gleeful expressions of both good and evil, for the release of Age of Wonders 3 on 31 March. You can find out more about the Theocrat class over on the Triumph Studios website.

By Matthew Loffhagen53 mins ago
News

By Logan Broadley4 hours ago