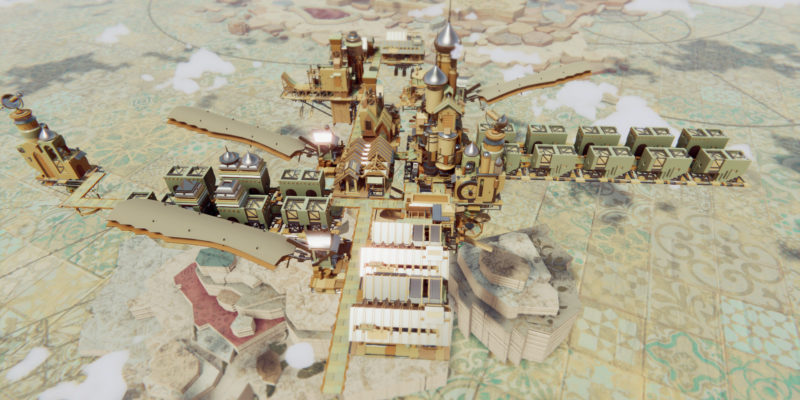 Cities in the sky have long been a trope of both fantasy and science fiction literature, having only made the jump to games in the last fifteen years or so. While those cities are normally representative of the narrative setting, actually using the city itself as the crux of a title hasn’t really been seen before. In enters the upcoming Airborne Kingdom from stage left, bringing the world of city building to the atmosphere. Does it have enough wind in its proverbial sails to keep the experience aloft, or will it ultimately end up tumbling back down to reality?

In the world of Airborne Kingdom, the laws of physics are merely a suggestion. According to the lore, there was once a civilization that resided exclusively in the air that united all of the societies back on earth under a singular governing body. This committee oversaw everything that happened on the ground and helped spread the technology and advances of all cultures amongst the populous. The result was a period of unprecedented growth and prosperity for all, united under the leadership of the magical city in the sky. Yet for some reason that isn’t really explained in the narrative, the Airborne Kingdom just disappeared, plunging the land-anchored factions into a period of turmoil.

After once again uncovering the secrets of flight, it’s your job to reunite all of the factions of earth under the same unified rule, one city at a time. As part of this quest, the goal is to construct your own community in the clouds, starting with only a town square and a handful of ambitious volunteers. Thus begins what ultimately boils down to SimCity in the atmosphere, and I say that in the most complimentary way possible.

I know this may come off as sacrilegious, but after SimCity 2000, the series got way too complex for my liking. There was an inherent beauty to only having a handful of different types of units that players could use to create the city of their dreams. Early on in Airborne Kingdom, I couldn’t shake the feeling that I was once again experiencing a return to form that I’d been missing for the last 25 years. Granted, through research objectives the palette of design options began to open up rather liberally, but at that point, the game already had me by the shorthairs. I was hooked and there was nothing I could do about it. 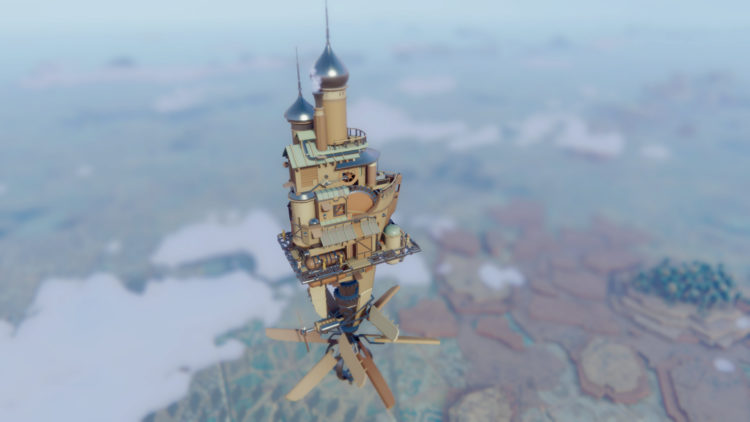 One of the key aspects of any city design, regardless of whether you’re on the ground or in the air, is symmetry. You normally want a city to start with a hub and spoke model where you start at the center of a town and then build outwards in layers, almost like an onion. In many cases, this is the kind of design that should be employed when building your levitating metropolis. Everything is about sustaining balance. Put too many elements to one side of the ship and you risk tilting the entire apparatus.

Trying to maintain balance is a key aspect of design in several ways. For one, if your whole town is on a tilt, that will actually upset residents. If you’ve ever played a city builder, you know damn well how crucial keeping the populous happy can be. Additionally, if your city is off-kilter, it can impact the efficiency of the ship when traveling. The trick is to not as much focus on the location of a structure, but rather on the unit’s inherent weight. As you might assume, it would take three to four housing units to balance out the weight of a single storage warehouse. These are elements to keep in mind when keeping aloft.

Another piece of the puzzle when building a rapidly expanding metropolis is resource management. Given that your ship can fly around virtually anywhere in the world, it can simply go from place to place, gathering resources such as quartz, clay, coal, lumber, food, and water. Residents are sent on missions to gather these materials on the ground and then bring them back to the city. And before you ask, yes, it’s okay to strip mine an area for everything it’s worth, because the kingdom reseeds the area for regrowth in the future. 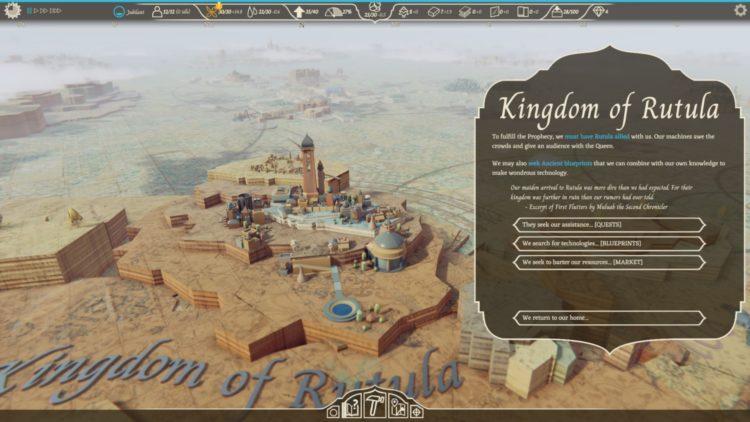 These materials then become one of the core driving factors to travel, because once an area’s materials are depleted, it’s time to move along to a new area. Throughout these travels, you begin to come across both small and large communities on the ground. The smaller cities act as resident feeders for your own city. Recruiting these people will help address the ever-expanding needs of the skytropolis, but it comes at the cost of now needing more housing and having additional mouths to feed. Regardless of whether they are converting clay into building materials or gathering resources back on the ground, having plenty of residents is the engine that drives the evolution of any settlement.

Then there are the larger kingdoms, which not only act as a citizen feeder but potential ally. In the seemingly never-ending quest to reunite the land, much like in the earlier-referenced bygone era of prosperity, you try to recruit the support of these cities under a singular leadership council. However, that doesn’t mean they are just going to happily join without question. You must first complete a handful of different missions for each kingdom before they begin to share residents and resources. These side jaunts could consist of anything from going and fetching a tree that is holy to residents all the way down to locating a broken-down water pumping facility and rehabbing it back into working order. 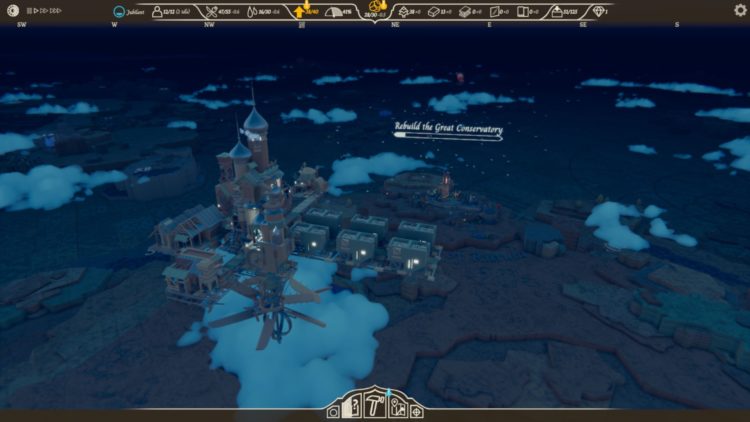 Once you bring a city into the fold of the Airborne Kingdom, it then opens up additional options such as the trade of goods and intelligence. Intel is then used to form the basis of your ship’s constantly advancing technology. The academy then researches these blueprints to become new pieces of the puzzle when designing the ever-expanding ship. The academy can also research innovations to existing technologies such as building stronger propellers that use less coal, adding additional planes to the airport, or discovering ways to ensure that citizens consume fewer rations daily.

Eventually, you will once again need to turn the focus from the needs of the city back to the needs of the citizens. During the expansion process, they may become disenfranchised with the way things are being run. Anything from not having enough housing to the city having too much of a tilt can play a role in their overall satisfaction. Hell, they can even end up content but not having fulfillment in their life, leading to the introduction of leisure and religious activities.

Building out your city is a very rewarding process that will keep players on their toes for numerous hours. Due to the lack of true conflict, aside from the never-ending cycle of needing resources to continue to operate, it tends to consume large chunks of time. This is what I like to refer to as a “sunrise game,” meaning you start playing it at 10 PM, only to look up and see the sun rising. For folks that prefer to indulge their inner OCD, this will undoubtedly consume countless hours of your life. 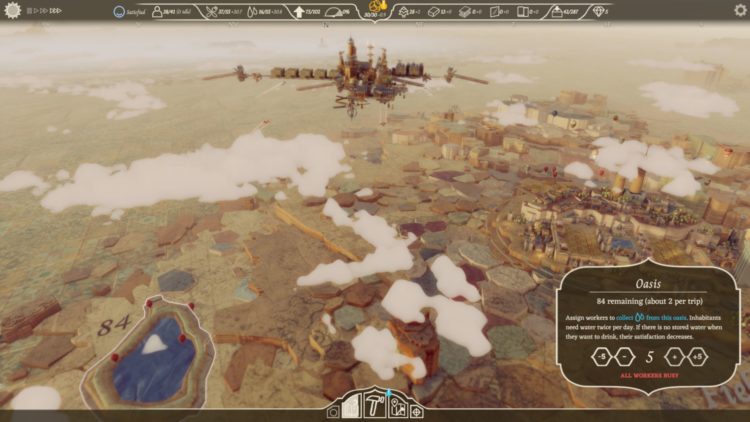 My one true concern with Airborne Kingdom is actually what happens when your budding metropolis begins to get exceptionally large. The bigger my city became, the more the PC started to chug. Sure, I fully expected my CPU and GPU to be taxed, especially given the excessive amount of number crunching continuously going on. However, it also was impacting the framerate, especially when playing at speeds higher than the normal passage of time.

Once the framerate started to experience issues, this is also when city planning also began to become more difficult. For some reason, trying to select the proper location to place a new piece of construction became excessively difficult to position. The outline of potential elements would begin to flicker and jump around the screen, as the cursor struggled to keep up with what was going on in the game world. Granted, this issue was greatly reduced when opting to perform construction in paused mode, but when you’re trying to quickly expand your civilization, halting the action doesn’t feel as productive.

For what it’s worth, Airborne Kingdom caught me completely off-guard. I found damn near every moment building my kingdom to be both worthwhile and all-consuming. If anything, I would caution you to reserve large chunks of time to play. Otherwise, you will find yourself staring at the sunrise and wondering where the hell your night went.

Melding the city-building and exploration genre together shouldn't work this well. Airborne Kingdom does a fantastic job of continuously throwing new challenges at the player, while simultaneously devouring countless hours in the process. For a mere $24.99, this is a title that will absolutely give you plenty of bang for your buck.