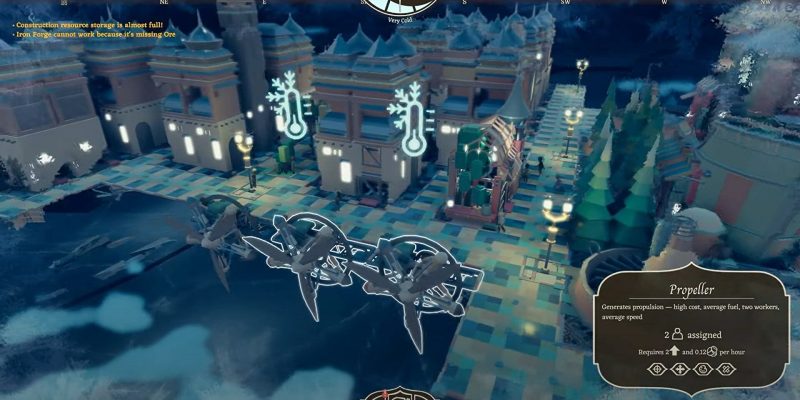 Although I have limited experience with city builders, I nonetheless ended up enjoying developer The Wandering Band’s Airborne Kingdom back in 2020. It offered quite the distinct take on the genre, as it saw players constructing a floating city capable of navigating a sprawling open map to gather resources. The ways in which the game challenged my proficiency with resource management led to a fair degree of stress, but it also contributed to a palpable sense of satisfaction whenever I got my city to run without any major hitches. If this sounds at all interesting to you, then Sept. 19 will serve as the perfect opportunity to pick Airborne Kingdom up, as that marks the release of a new free DLC update titled The Lost Tundra.

According to a press release, The Lost Tundra implements a whole new biome of the same name into the world map, and even players who have yet to finish the main story can explore it if they wish. However, those players should probably think twice before doing so, as the Lost Tundra does more to test your resource management skills than any area in the base game.

What’s so tough about it?

Essentially, the Lost Tundra comes bereft of any food, coal, and water, meaning that players will have to stock up on those resources and manage their rate of consumption to ensure the kingdom’s survival. Unfortunately, this task is further complicated by the biome’s frigid temperatures, which threaten to freeze the kingdom’s structures and harm their efficiency. New furnace structures can help offset this effect, but since they cost resources and increase the kingdom’s weight, players will have to carefully strategize how to set them up.

All in all, this new Airborne Kingdom DLC sounds downright anxiety-inducing. But if you came away from the base game craving a bigger challenge, then the update will no doubt deliver just that.