Rogue-lites have become something of a popular genre in recent years. The idea of fighting your hardest only to lose everything and start again can be an intense experience. There are a lot of challengers in the arena these days, and Airheart is hoping to grab its own piece of the pie.

Airheart tells the story of Amelia, a pilot sent from the surface world to live in cities amongst the clouds. Here, she makes a living by fishing (yes, there are fish in the sky) and working as a mechanic. She dreams of flying into the stratosphere to catch a legendary sky whale and make her fortune. Like many games in this genre, the plot is limited, but it advances as you progress higher into the sky.

At its (air)heart, the game is a twin-stick shooter with automatic movement. Your plane propels itself, and you handle the movement using the left analog stick. While keyboard and mouse is an option, I’d strongly advise using a gamepad. The right stick handles aiming, and the triggers handle firing your weapon and harpoon. The controls are very simple and feel sharp and responsive. 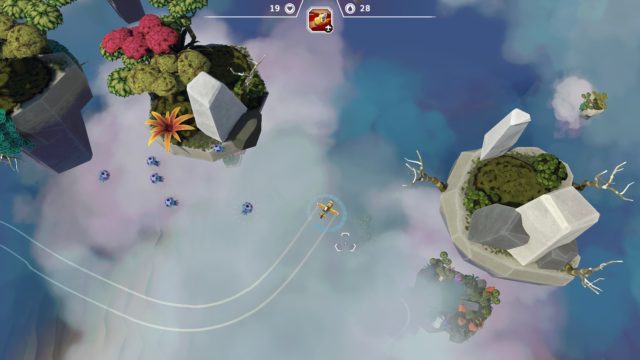 The harpoon is an interesting addition. It allows you to latch onto fish or pull shields from enemy aircraft or structures to make destroying them easier. And there’s actually a lot more to it that the tutorial doesn’t explain. You can use the harpoon to grab rocks to make sharper turns or rip a weapon from an enemy. It’s nice to have all these extra features to discover as you adventure above the clouds.

Less impressive, however, is how the game explains its crafting system. As you defeat enemy aircraft, you’ll acquire various parts to use in crafting. Certain combinations of these will create new materials and even weapons or plane parts. There’s no recipe guide, so you essentially have to guess what combination of materials are needed though, relying on a Mastermind style system of clues regarding what the correct components are. The components aren’t consumed unless you’re successful, but money is. This leads to a lot of guesswork and wasted cash.  It can pay dividends though, as you can eventually create very expensive, and powerful, equipment to take on future excursions, some of which you cannot acquire in any other way. It’s a nice system, but it’s a shame that there was no explanation regarding how it worked.

And you will need these upgrades, as the upper levels become very difficult. Each area contains a transporter that takes you up to the next cloud layer, culminating in a boss. Heading up after defeating a boss leads you to a new region with a different environment and more challenging opponents. Until you upgrade, many of these opponents will be very challenging, and you’ll find yourself being shot down more than once. Interestingly, getting shot down (as well as returning to base by choice) begins a mini-game in which you plummet back through all the previous areas, dodging rocks and debris to arrive back at base. Should you crash on the way or miss your base entirely, you lose the equipment you took with you. I liked this as it’s a unique way of handling your character’s demise, but it leads to Airheart’s main weakness. 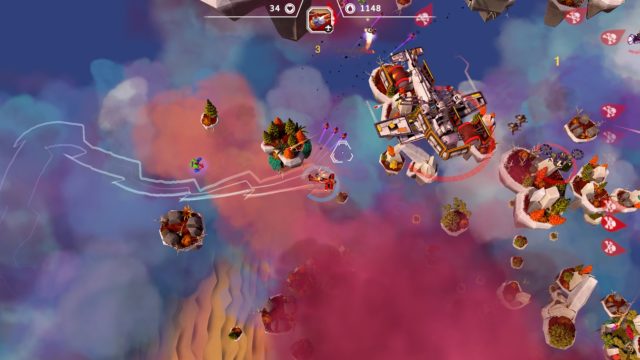 This game can be very grindy at times. To get better equipment, you either need money from fish or materials. Fighting puts you at risk or losing everything, and fishing runs the risk of completely depopulating an area of that resource permanently (itself an interesting mechanic). Losing your best plane parts or strongest weapon can be very frustrating considering how long it could take you to regain it.  Fish only give you a little money, and enemy planes don’t always give you the materials you need, leading to grinding.

This can be an issue with the genre as a whole, but as this is a rogue-lite rather than a rogue-like. The idea of progression after each death is a core part of the gameplay loop. Going on an expedition and returning worse off can be quite the irritation. Replaying the early stages each time is handled well enough, though, as you can simply move up to the higher areas by heading straight to the exit.

That’s my only significant complaint, however. There are a lot of little details that combine to make this a fun experience to play through. The fact that you must be careful of overfishing to allow the fish population to regrow is a nice touch. Neutral planes will take resources too, and if you attack them the police will turn up to take you down. Those same police will also attack pirates in the early areas. Firing your weapons increases or decreases your speed depending on the direction they are fired. Using your harpoon allows you to pull a large fish down to your base when it’s too big to collect. All of these little things show that a lot of thought has gone into Airheart, and discovering these is enjoyable.

While this isn’t going to blow you away visually, it does look very nice with plenty of bright colors. Everything stands out well, and each area is distinct. Enemies are varied, though I didn’t see a huge amount of the very large ones as I needed to keep my distance to survive. The fact that you can see the previous levels you’ve traveled through below your current layer is a neat touch. As you move up the levels, the music gains additional layers to it which is a further nice touch. The fact the music is very good throughout is a bonus, but the sound effects are comparatively weak, with powerful weapons not sounding nearly as strong as I’d hope. 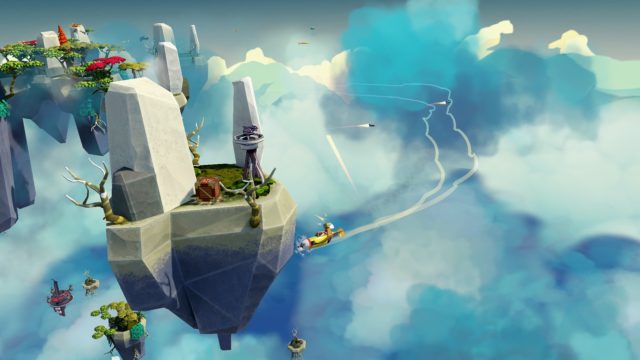 Airheart is a satisfying game to play despite the occasional annoyance of grinding. With a fun world to explore and lots of planes and weapons to use, there’s plenty to enjoy here. If you can overlook some of the annoyances that come with the rogue-lite genre, then you’ll likely have a good time as you grow in power to finally make that catch of a lifetime.