Since there are so many games in Early Access these days, to stand out from the crowd it’s always good to have some kind of unique selling point. Albedo: Eyes from Outer Space is one such effort, drawing people in with a weird name and then bamboozling their genre expectations. At first glance it’s really not that apparent what the game actually is. An adventure? A puzzler? Some kind of FPS?

The game starts with our protagonist, a night watchman called John T. Longy, being sucked into a bizarre mystery at the Jupiter laboratory. What exactly is going on is unclear, but while on his usual shift there’s an explosion which hurls our hero into a dark, dank basement room.

It’s in here that the adventure begins; but before players can start figuring out what’s happening in the broader scheme of things, they’ll need to somehow find a way to escape. That’s not just a matter of opening a few doors though, because this debris-filled room reveals the first part of Albedo’s mystery: it’s a first person puzzle adventure game … thing. And some of that debris is going to help you get out. 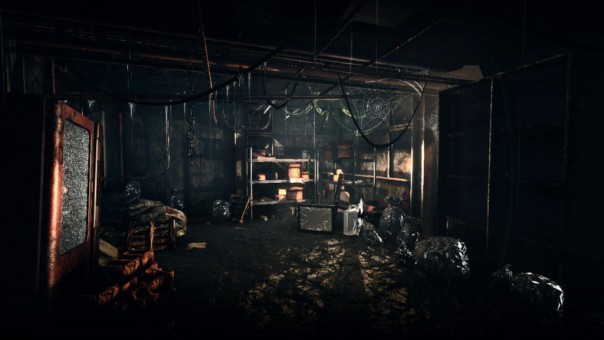 This room needs a damn good tidy, but that’s not part of the puzzle.

One of the objects hanging around in this room is a Temporal Dilation Tool, and (when activated) it acts like a magnifying glass which can see into the future. Using this device to scan the room can reveal some very useful clues as to what will happen if you manage to figure out how to properly utilise the various nearby objects. It might even reveal a new object, which will then appear if you manage to figure out how to get hold of it. It’s a weird idea, but a really elegant way to provide the player with more clues.

The inclusion of a device to show you the future may make Albedo: Eyes from Outer Space sound easy, but even the very first room I had myself and Longy fumbling around trying to combine objects. It didn’t help matters that behind a locked door there was a deafening thudding going on. The kind sound which suggested something unsavoury was about to burst in and eat Longy for lunch. Using the Temporal device it became clear that the broken vending machine, a piece of rope, some food, a trap and a hungry rat were what was going to get the pair of us out of this predicament. 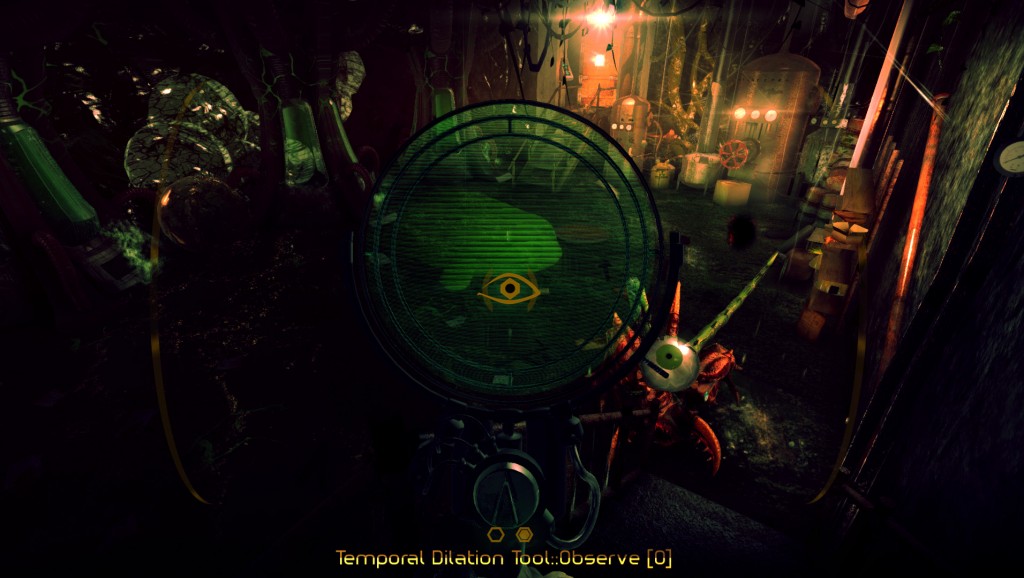 A Beluga whale is supposed to be here in the future … obviously.

We often joke about absurdly obscure adventure game clues here on IncGamers (Tim’s recent encounter with Randal’s Monday is a case in point,) but Albedo doesn’t fall into the trap of combining a picture frame with a rollerskate and then a UFO, which is an actual puzzle from Secret Files. Logic abounds here, and there are enough cryptic clues to get the old gray matter working through nearly all of the puzzles. Even if they do take a little time to figure out.

Played in a first person view, everything in Albedo is controlled with the mouse and WASD keys. The mouse is used as a way to manipulated items once they’re picked up by moving it left or right to access action-icons displayed in the middle of the screen. It takes some getting used to, but works fairly well. There are also hotkeys which can alleviate some of the mouse menu scrolling, which is just as well because the inventory can get quite busy as you progress.

Each section has plenty of objects in it, some of which look like they could work to solve some of the puzzles but are, in fact, devious red herrings. Finding all the objects in a scene can be made a little easier with the click of the middle mouse button, handily highlighting any interactive objects with a yellow glow. Playing in a first person view you really need to pay attention and scan every corner because (even when it’s glowing) not everything is in plain sight.

Escaping the first room took some time, but as you begin to understand the game’s  logic things start to get a little easier. In a later room, for example, you need to find a way to pick a lock. The solution was a simple paperclip, concealed in the bottom of a drawer by a hidden panel. This took some time to find, but in retrospect the clue was actually right in front of me. I should also add that Albedo: Eyes from Outer Space has one of the best lock picking mechanics I have seen in any game, with the player having to figure out how to bend the paperclip as they slide it into the lock. Sounds potentially tedious, I know, but it’s actually really fun. 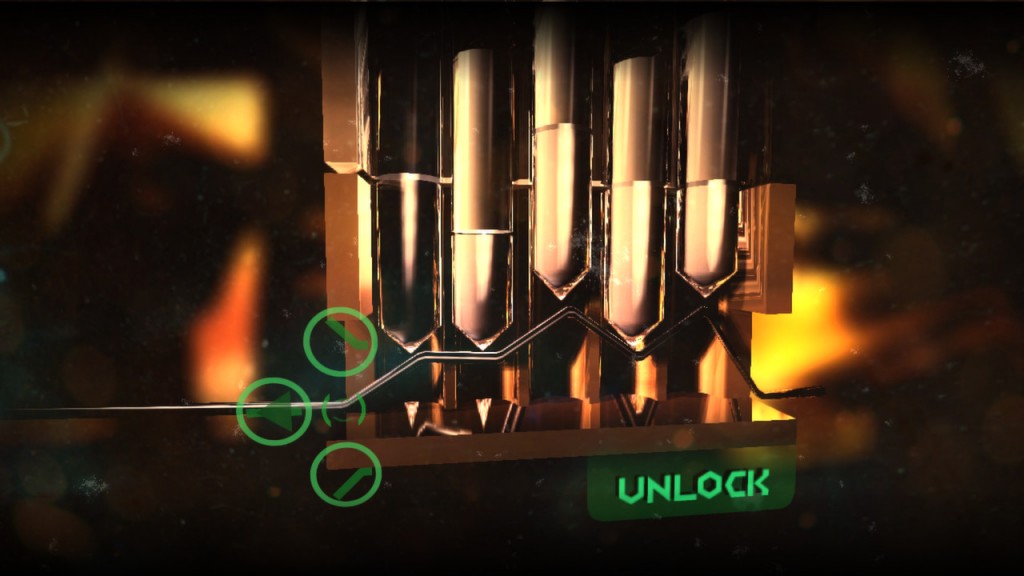 I can vouch for the fact that a couple of rooms took me around thirty minutes each, giving the impression that some of the puzzles are quite tricky. With the game being segmented into individual rooms, each one offers different puzzle styles to solve; whether that’s trying to configure some pipes, or attempting to create a distraction in order to clear an enemy out the way so you can reach an important object.

Another thing this game has going for it is the art style, which is definitely inspired by 50s/60s sci-movies. Albeit with an organic slant. As soon as the game loads up it immediately has that 60s feel, helped by some period-appropriate audio. The only criticism I have is not being able to hear Longy utter the dialogue when discovering a clue. It’s not a game breaker by any means, but it would help the player become a little more attached to our unfortunate protagonist. 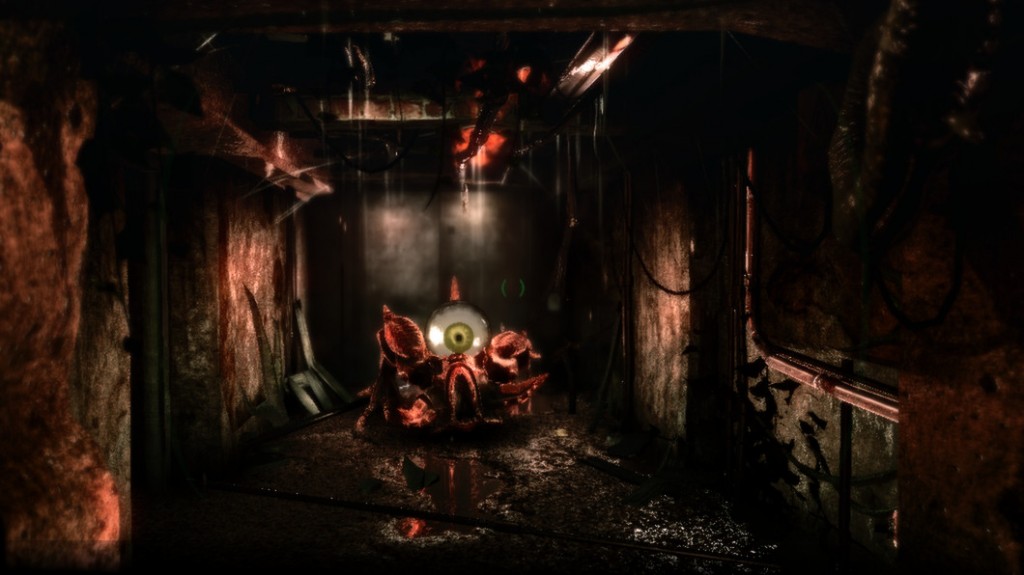 Told you it was weird. Big eyes everywhere!

Albedo: Eyes from Outer Space is still in Early Access, so there are new bits and pieces (rooms, mostly) still being added to the game in readiness for a full release next year. Let’s also not forget this game has been created by one guy, Fabrizio Zagaglia. This is impressive in itself because it’s a gorgeous looking game, and Zagaglia has really thought about each puzzle carefully; just enough to challenge the player without causing frustration.

If you want to play a game which offers great puzzles and oozes sci-fi atmosphere then check this out while it’s in Early Access.