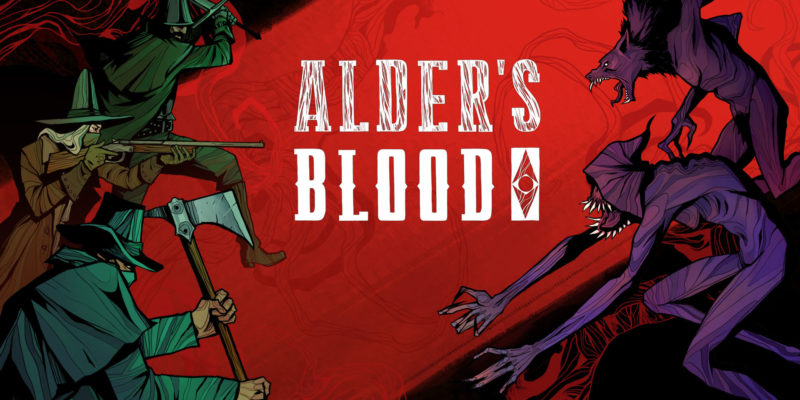 Gothic horror is fine and good, but you know what would be even better? Shooting it in the face, as is the video game way. Such is the premise of Alder’s Blood, though it takes a somewhat anime direction.

The world of Alder’s Blood isn’t our own. Existing at around a mid-19th century level of technological sophistication, it is a dark and brooding place. Beasts roam the wilds, preying on the weak. Only large and well armed forces of humans can hope to defeat them. It’s much easier for Hunters, ancient half-breeds carrying a seed of darkness in them. You are Chief, a leader of one such group. Duke, the greatest of your kind, has just gone blind in search for the solution to the beasts. You see, God is not only dead, but his rotting corpse is what’s spreading this malaise in the world. It’s up to you to carry on the fight and free humanity of the scourge of darkness forever. 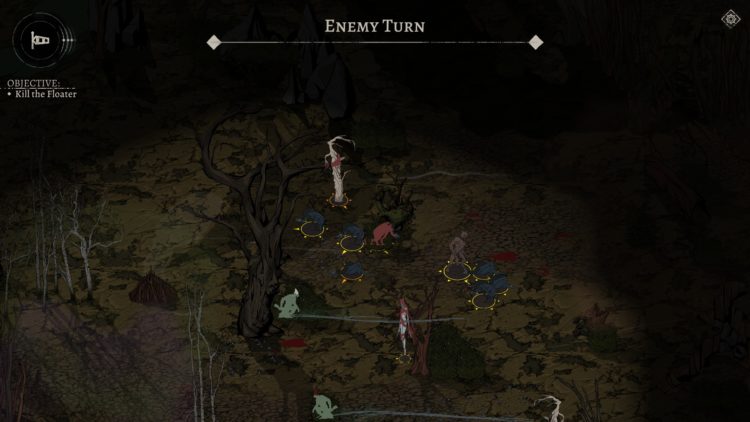 That many beasts in place is a bad thing.

Alder’s Blood is a fairly mechanics-light tactical RPG. When you go into battle, you take up to three Hunters. Each of them has an amount of stamina points, which are spent for actions and movement. Once you spend a stamina point to move, you can move freely in that territory, granting more freedom than XCOM would.

Surprisingly little hunting actually goes on. The missions usually bid you to achieve certain objectives, and they rarely involve slaying. In fact, Alder’s Blood insists that it would be best to not kill any more beasts than necessary to fulfill the objective. It raises the local Darkness levels (which is bad) and can even raise the corruption levels of your hunters (bad, but in a strategic sense). 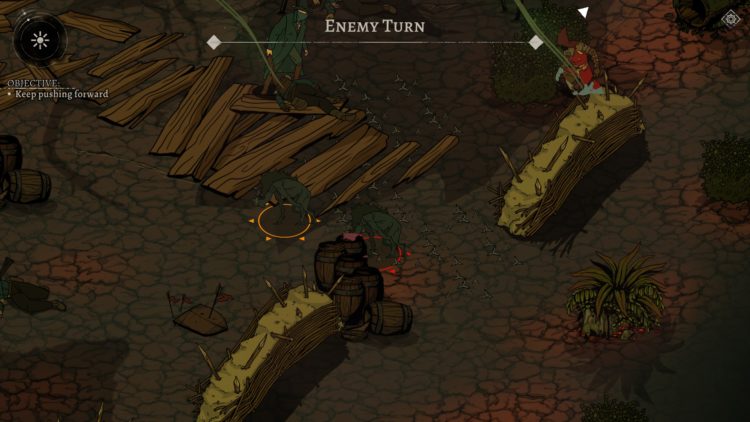 Most of the time, you’ll be throwing pebbles to distract the monsters and running from bush to bush. While some attacks can make sound that alarms the enemies, your movement is completely silent. However, your hunters give off a smell, so you’ll want to stay downwind of any monsters. The smell merely alarms the monster, but if they are close enough, they might move in to investigate and find your Hunters.

The prey was always the hunter

Alder’s Blood stacks the battle against you. If a monster sees you while you’re moving on your turn, they may activate immediately to rush in and get the first blow. And most attacks deal stamina damage as well as health damage. Since using up all stamina makes you skip the next turn, this is a bad thing.

Luckily, this applies to monsters as well. This works marvelously when paired with backstabs: Just sneak behind the monster and attack it with a small weapon, and it will immediately collapse exhausted. Exhausting enemies and running away are how you can finish a mission without killing any monsters. 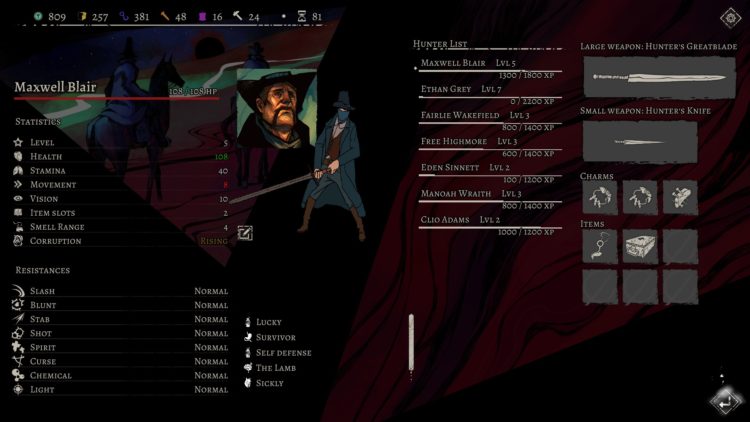 You don’t get any extra benefits from killing monsters anyway. In Alder’s Blood, you know all the rewards of the mission — XP included — beforehand, so you don’t need to farm monsters. Just avoid kills to avoid losing HP and accruing Corruption, and you’ll walk away a richer man.

Speaking of corruption, just like Wardens in Dragon’s Age, the Hunters pay dearly for their half-breed nature. Each of them will accumulate more corruption as you play. If they reach a breaking point, they snap, dealing damage to other hunters, and die. You prevent this by doing two things: not getting an excessive amount of corruption and sacrificing your old, corrupt hunters to transfer their XP to freshly hired replacements.

A mechanic that demands that you consume your troops would hurt in a game like XCOM, Phoenix Point, or Jagged Alliance, but not in Alder’s Blood. Not only are your Hunters randomly generated, but they don’t have much to make them stand out. The stats that define them in the game don’t matter as much as their equipment.

All the skills that you gain leveling up are just passive upgrades that only matter while camping. So you’re not losing your favorite Ranger when you sacrifice someone — but you may miss their equipment capacity. In the same way, a fresh batch of rookies on a mission won’t perform noticeably worse than veteran soldiers. In a sense, it makes it less likely that you’ll run into a death spiral than in XCOM. 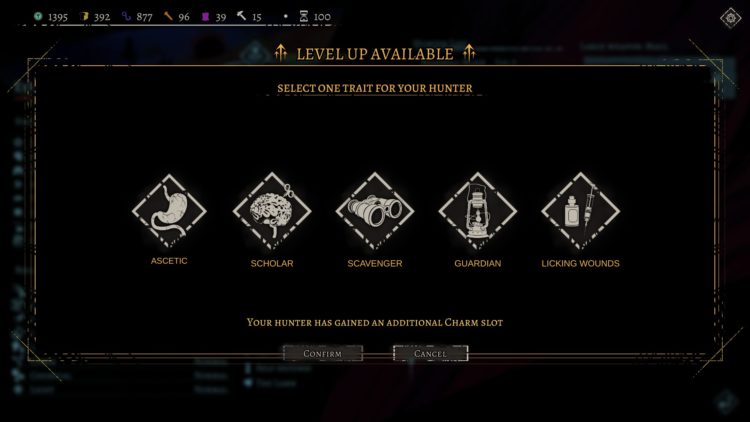 With equipment, each Hunter can have two armaments each. Anything can go in the big weapon slot, while the small weapon slot only accepts some. During the game, you’ll be wielding axes, swords, daggers, rifles, harpoon guns, and more. Heavy weapons slow a Hunter down. Guns make his smell stronger (due to gunpowder) and block one item slot (due to ammo dependency). Each Hunter can also permanently equip (or replace) one or more charms — stat boosts. The transitive nature of charms means that you can’t just perfectly duplicate an old Hunter after transferring his XP to a new guy.

The items section — Hunter can equip one more — shows a lot of variety. You have traps, varying throwing knives, medical stuff, and even hand grenades. Crafting (called “tinkering”) is one of the possible camping tasks in Alder’s Blood, the others being guarding, scavenging, and healing. Scavenging is the way to get food, money, and crafting materials by spending a day at a location. Each location, a node on the strategic map, has its own rating for each scavenging good, so some places are better than others. You can’t send out all of your Hunters to scavenge, as then they risk injury and actual ambushes. Some will have to stay on guard. It’s usually best to spend each night dedicated to a certain activity to maximize outcomes.

And while more Hunters consume more food, I found that running with a larger party allows more scavenging and tinkering, plus offers a good reserve of fall-back troops. 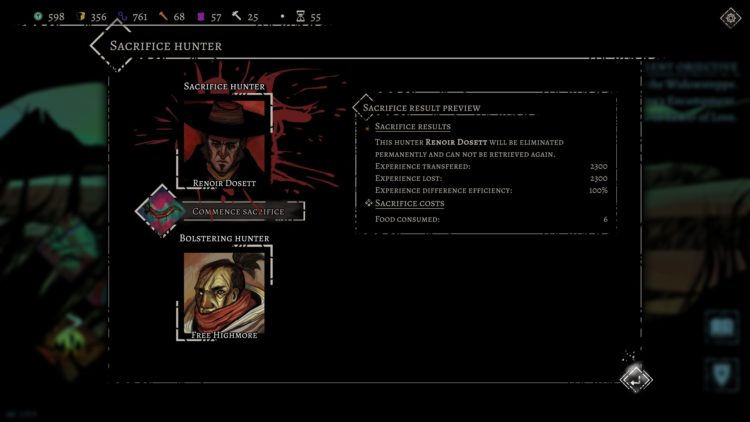 THE YOUNG SHALL EAT THE OLD

Alder’s Blood really stands out with its stylized, brooding art. The game is fully 2D and character illustrations, map node backgrounds, and even mission maps really stand out. The Hunters and the monsters themselves… don’t. Enemies look okay but not great, and more variety and a more unifying theme would have been ideal.

At the same time, the audio works well, especially the music. There’s really no voiced dialogue in the game, though a character may utter a thing or two to give more spice to their new text box. And the last patch before release introduced unit grunts into Alder’s Blood, so your Hunters aren’t voiceless anymore.

I’m feeling somewhat blase about Alder’s Blood. On one hand, the game looks great and the writing, while clunky, can inspire a bit of wonder. The gameplay is, however, lacking, as you don’t get too attached to your Hunters, you don’t do much hunting, and you barely understand why your people are supposedly that much better than regular humans. Sure, you can turn into a shadow form to instantly kill an exhausted monster, but you wouldn’t need that if you replaced three weirdos with swords with five regular dudes with shotguns.

Alder's Blood is a functional game, beautiful, but not exceptionally exciting. On one hand, the game looks great and the writing, while clunky, can inspire a bit of wonder. The gameplay is, however, lacking, as you don’t get too attached to your Hunters, and you don’t do much hunting.