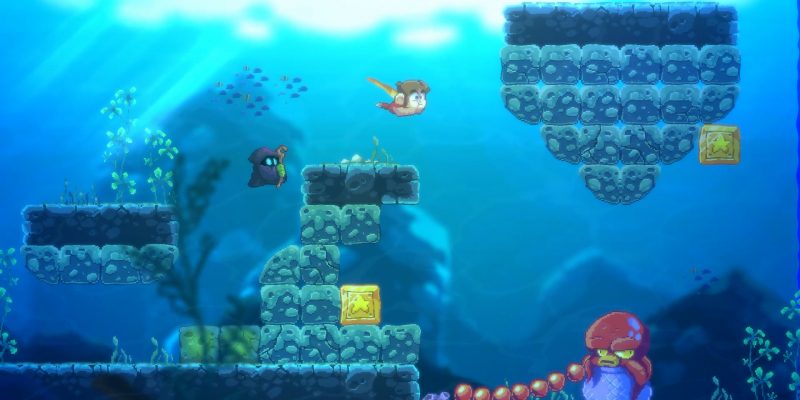 There’s no question that the video game industry has seen obstacles since March 2020. Once Covid starting shutting down offices and moving development teams, it’s been a gamble as to whether your most anticipated game would indeed arrive on its announced release date – if ever. That could have been the case for Alex Kidd in Miracle World DX. Jankenteam and Merge Games had revealed the platformer back in June of 2020 as the global pandemic began to ravage the world. However, if there was some sort of silver lining to it all, it’s the fact that the modernized Alex Kidd is indeed launching. In fact, Alex Kidd in Miracle World DX has a new, sooner release date of June 22, instead of its previously planned launch on June 24.

It’s surprising to see a game come out ahead of schedule rather than hit with delays. The original Alex Kidd found a place in retro gamers’ hearts when it released back in 1986 on the Sega Master System. Alex Kidd in Miracle World DX doesn’t ditch the old for the new entirely. The new release reimagines the pixelated levels and brings them into the modern age of gaming with a new art style yet keeps true its original designs.

There will be some noticeable additions and changes. The game will include new modes, like a Boss Rush mode, along with reworked controls and enemies. If it’s nostalgia you’re craving, you can also switch back to the original 8-bit layout to satisfy that weird part of your brain that says “nothing new is good.”

Keeping up with the classics

Alex Kidd in Miracle World DX will launch on its new release date of June 24 for $19.99 USD. You can check out PC Invasion’s preview coverage from an early build if you’re curious about how the game plays. The ‘Kidd can also be found in the Steam store and wishlisted. The game will also launch in the Epic Games Store but doesn’t have a store page or listing at this time.

Evil Dead: The Game adds Cheryl to the roster, gameplay reveal this week