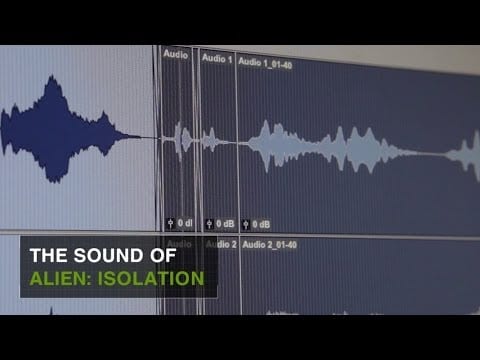 This new trailer about the audio production in Creative Assembly’s upcoming Alien: Isolation title reveals some traditional foley recording techniques. These include putting a pile of vegetables in some soil and crushing them, and walking around on what looks to be a shower basin. It’s pretty great to see, actually. Like discovering a film has made the effort to construct little models for its special effects instead of churning out some cheap CG crap.

The sound recording (supposedly inspired by the discovery of information about how some of the sounds in the original Alien were created,) is only half of this trailer. For the rest of the video, it’s Creative Assembly talking heads reassuring people they know how important audio is for a horror title. If all goes well, Alien: Isolation should have impressive sound design.

For the musical score, the developers have put together an orchestra which includes a few people who are said to have played on the original Alien score. Which doesn’t mean much if they’re given rubbish to play, but hopefully that won’t be the case, eh?

The game is due on 7 October.

Triumph show off the Age of Wonders 3 level editor