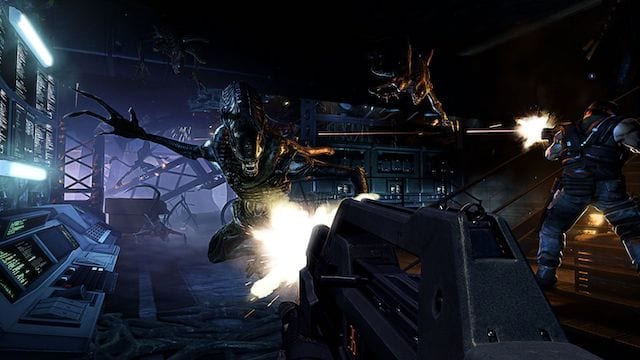 Just a couple of days after Cliff Bleszinski discussed how he was set to work on an Aliens project, another scuttled project has surfaced. Frederik Schreiber, vice president of 3D Realms (Duke Nukem 3D), recently shared details on their own Aliens game, though it had a different approach.

Per his tweet directed at Bleszinski, Schreiber revealed the game’s title — Aliens: Hadley’s Hope. Instead of featuring Newt from the 1986 Aliens movie, it would’ve focused on more of story-based multiplayer. The game would’ve featured “a misfitting mix of colonists and marines” who work together to take on a “protective alien Queen”. Apparently, she isn’t a fan of anyone that tries to steal her eggs.

An Aliens game too good to be true?

Hadley’s Hope was originally pitched as a co-developed project between Slipgate Ironworks and 3D Realms. It also would’ve included “teamwork and tactics” as part of its gameplay “to make progress through each level.” However, the multiplayer would’ve had an even playing field, thanks to “numerous alien Queens” helping out the main one. In-game levels would’ve also included their own styles and challenges. Not to mention mission-critical goals for the team to follow.

Alas, it didn’t happen. Like Bleszinski’s proposed project, this one just didn’t pan out. And with Disney’s purchase of the license, it isn’t due for a revisit. Still, Schreiber was optimistic in his post. “Maybe some day!”

You can see the pitch posts in the tweet below. Ahhh, what might’ve been… and what might have improved upon the heavily flawed Aliens: Colonial Marines.

Yup. Game was called Aliens: Hadleys Hope. We went quite far into pre-production before the Disney/Fox acquisition, and then we had to cancel it, and move on with something else.

Maybe some day! I bet yours was very different than ours? pic.twitter.com/brpq4FgwWT

The Division 2’s core mechanics are getting an “RPG overhaul”