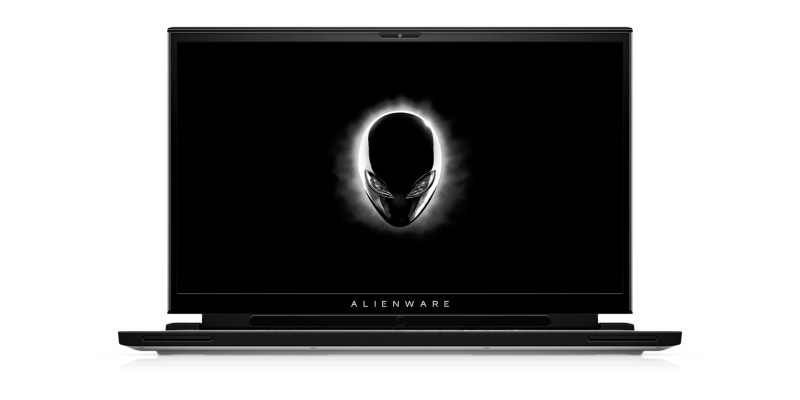 If there’s any good to be had from the COVID-19 pandemic, it’s that it’s leading to a kind of renewed emphasis on the PC market. Many are picking up laptops and desktops to communicate, work from home, and of course, play with each other in online gaming communities. As a result, companies such as Dell are seeing surging profits, and the continued demand is leading to ongoing innovations.

In a live-streamed press conference leading up to CES 2021, the company stated that it saw double-digit growth in its gaming business, particularly with its Alienware brand. This growth may be attributed to a number of factors, one of which being how over half of millennials and Gen Z identify as gamers.

“Gaming is about not just playing, but also staying connected with your near and dear ones and building community,” said Rahul Tikoo, SVP of the Client Product Group at Dell Technologies.

At CES 2021 today, Dell announced updates to select Alienware lineups to deliver more power and features to PC gamers. These updates include pro gaming performance on the m17 laptop, a jump to the latest generation of AMD processors in the Aurora desktop systems, and more. The emphasis on pro gaming isn’t exactly a new one, but it deserves some extra emphasis this year. Alienware is celebrating its 10-year partnership with Team Liquid, which may be one of the longest relationships between an esports team and a gaming company the industry has seen to date. The partnership is marked by two Dell-created esports training facilities, with one located in the United States and the other in Europe.

On the outside, not much has changed with the thin and portable Alienware m15 and m17 laptop systems compared to the previous generation. But when gaming PCs are concerned, it’s really what’s inside that counts. 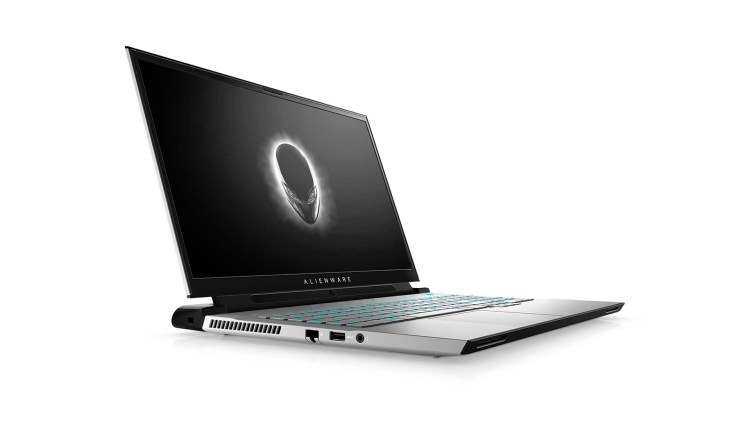 Both systems will support up to 32 GB of 2933 MHz DDR4 memory along with upgrades to the Nvidia 30 Series GPUs, and up to 4 TB of PCIe storage in a RAID 0 configuration. This will all offer incredibly fast performance, particularly for the larger m17. As another first for Alienware, gamers will be able to experience up to a 360 Hz refresh rate on a thin and portable system with the m17 R4 gaming laptop. Normally, that sort of screen is reserved for the gigantic Area-51m gaming notebook, which is really more of a desktop replacement system. But now, players can have that power in a system that can be quickly stored in a backpack and taken to BYOC events, gatherings, and competitions. Although a 360 Hz refresh rate might be more than the average gamer needs, it’s certainly something that aspiring esports players and enthusiasts might be interested in.

Additionally, both the m15 and m17 systems will include HDMI 2.1 ports that can output 4K resolution on screens at 120 Hz. With HDMI 2.1, you can connect the laptops to monitors such as Alienware’s 25” 360 Hz display to keep the high performance going on a larger display and even the monstrous 55” OLED 4K HDR display. Less expensive options include connecting an m15 to a 4K television with a wireless gamepad or keyboard and mouse combo to game from the couch. For those who want to stick primarily with 4k laptop screens, the m17 R4 can be configured with a 3840 x 2160 resolution at 60 Hz with the added bonus of Tobii Eyetracking technology.

Both the m15 and m17 Alienware laptop systems are scheduled to launch on January 26, 2021. 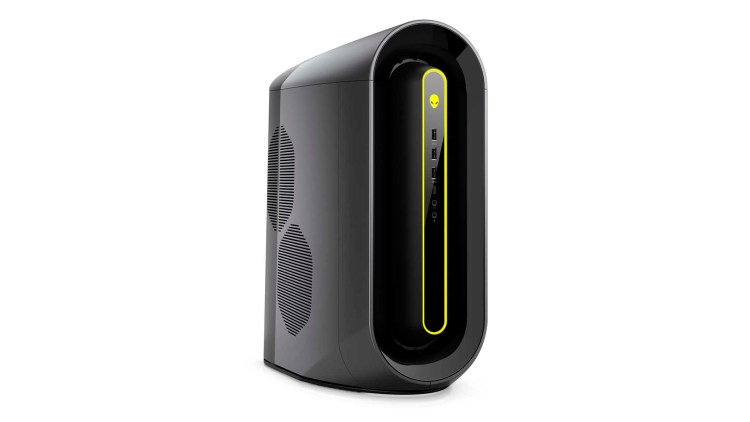 On the desktop side, the Alienware Aurora systems are receiving AMD Ryzen 5000 Series processors, which are based on the Zen 3 architecture and TSMC 7nm process. The latest generation supports up to a 3.4 GHz AMD Ryzen 9 5950X 16-core processor with 128 GB of 3400 MHz DDR4 memory – double the memory capacity of the previous generation – and an Nvidia GeForce RTX 3090 video card. The top-of-the-line system might be way out of the price range for many, but it’s impressive none-the-less. The system also includes a tool-free chassis system for quick upgrades to help futureproof the computer by allowing users to gradually upgrade their systems over time. The lowest configuration includes an AMD Ryzen 5 3500 6-core processor, 8 GB of DDR4-3200 memory, and the Nvidia  GeForce GTX 1650 SUPER video card.

It’s clear that with the growing power of its portable systems, Alienware is putting increased emphasis on content creation and live streaming in addition to gaming. Even with a moderately decked out system, users will have the power to run almost any game at its highest settings and still get solid frame rates at 1440p or perhaps even 4K resolution. Higher configurations will allow for increased multitasking and smooth live stream broadcasts. 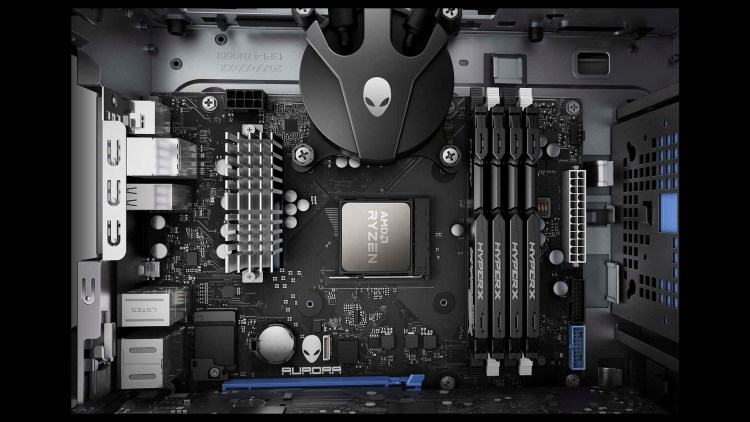 A look inside an Alienware Aurora R10 desktop system.

During the live stream presentation, Rahul Tikoo pointed out Alienware’s improved thermal design for both its laptop and desktop systems, including bigger fans, more fin stacks, and bigger heat pipes to help maintain optimal temperatures while keeping a relatively slim and elegant look. For instance, Alienware introduced vapor chamber cooling options for its highest configurations last spring. In addition to having a jet engine-style air-cooling design, the Aurora Ryzen Edition R10 configurations include liquid-cooled multi-GPUs for those who want top performance from dual video card setups. 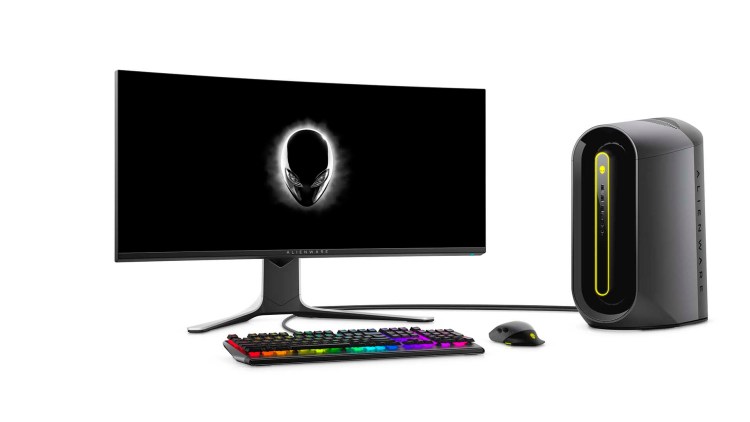 There’s also the myriad of Alienware peripherals such as wireless mice, mechanical gaming keyboards, 38″ curved monitors, and headsets that are all designed to match either the “Lunar Light” white or “Dark Side of the Moon” black aesthetic and synced AlienFX RGB lighting.

But what is missing from this year’s CES showcase are updates on the Alienware Concept UFO, which debuted last year as a handheld device that packs the power of a gaming laptop into a Nintendo Switch-style prototype running Windows 10. Hopefully, Dell and Alienware haven’t completely shelved the project and we’ll see it again at some point in the future. Until then, I suppose Alienware fans will have to look toward laptop systems such as the m15 and m17 for portable gaming.