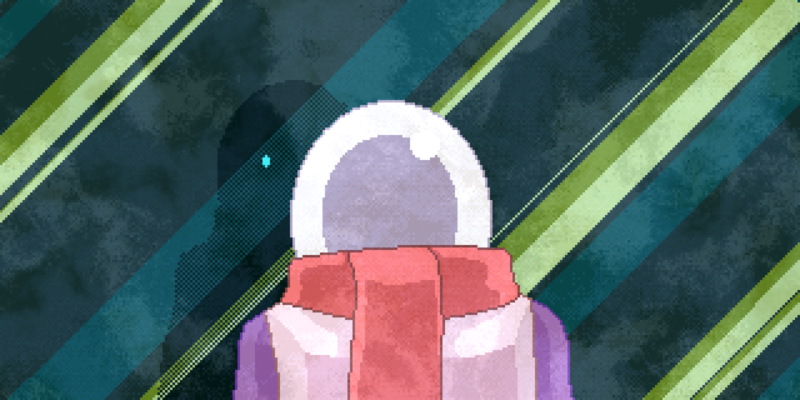 Benjamin Rivers’ first new title since 2012’s Home puts you inside the jauntily bescarfed space suit of a lone planetary survivor. As the contradictory title suggests, however, Alone With You doesn’t quite abandon you to a solitary fate. Guiding your efforts to reconstruct a damaged escape pod is an eager, if occasionally guarded, AI called AF4B/3B. To help you along even more, this AI has diverted enough power to the colony holochamber to reconstruct versions of four deceased colonists; experts in their fields.

Dubbed an ‘homage’ to the Sega CD system (basically a CD drive for your Genesis/MegaDrive), Alone With You has a restricted but distinctive colour palette, heavy with blues, purples, and pinks. I didn’t play a whole lot of Sega CD games, but I did grow up with the Amiga, a computer which shared a lot of the 16-bit aesthetics being deftly recreated here. Its crunchy, alien music evokes that same era, and echoes the images of isolated landscapes and abandoned laboratories.

Alone With You was released on the PS4 and Vita back in 2016, and, aside from adding straightforward keyboard controls, doesn’t seem to have changed much for its debut on PC. In-keeping with its retro style, the game sticks to 30fps. 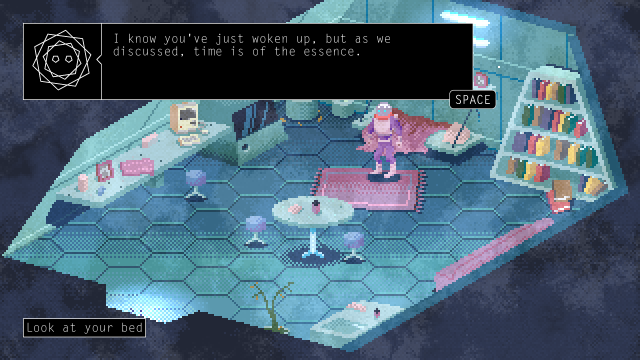 After a short introduction establishing the relationship between yourself (or however you dub the protagonist) and the AI, as well as the general fate of the failed Terraforming colony of which you were a part, the game settles into a regular pattern. By day, you comb through ruined and abandoned colony buildings, performing your role as a grim archaeologist. At night, you get to spend time with one of the four holograms (usually the one associated with the zone you’ve just explored), relaying your progress and discoveries to both them and the AI.

The routine nature of your task is emphasised by a series of animated scenes that play out with the passing of each day. You get up and switch off your alarm at 6.00am, you switch on the lights of the planetary vehicle and put it in gear as you head out, and so on. The game, it seems, is making a point about the lonely monotony of your existence, but, a few urgent breaks in the routine aside, does sometimes skirt the borders of actual monotony a little too closely.

Your time inside various communications and energy facilities is largely spent examining objects of note, recovering set items for the escape pod, and solving simple puzzles in order to progress. There are a couple where a piece of paper and a pen will prove handy, but are mostly along the lines of finding the password for a locked door. Throughout, the AI provides guidance and exposition on the things you are uncovering. 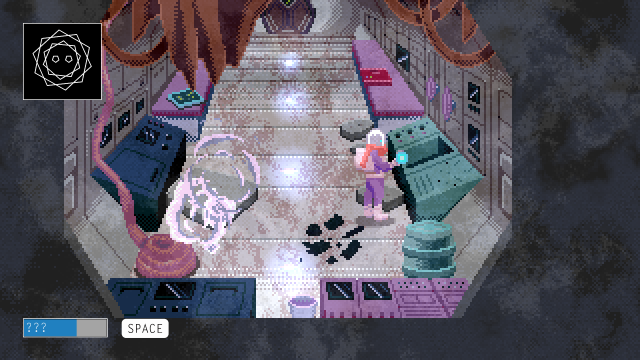 Alone With You’s strengths lie not with its fairly straightforward facility wanderings, but in the unravelling of the full story of the colony’s fate. Each of the four holograms had a role to play in the collapse, their brilliance tempered by their innate, human flaws. Teasing out their stories, as well as the sub-plots and meta-dramas of other planetary dwellers, through the sequential exploration of the planet’s facilities and dialogue choices, is the heart of the game.

Themes of isolation, loneliness, inadequacy, and the full remit of psychological traumas induced by the conditions of a failing space colony are all explored. So too are specific scientific and engineering dilemmas. Is it ever wise, the game asks, to abandon the rigour of your methods in a time of extreme crisis? The scientist who saves the day with an incredibly risky experiment will be hailed as a hero. One who does the same and dooms everybody will be forever cursed as a scourge. Alone With You presents its narrative and largely allows you to draw your own philosophical conclusions.

And yet despite the gloom and morbid fascination of learning how another life was extinguished, Alone With You is also a tale of bittersweet hope. Whether that’s the drive keeping you going as the last actual human on a planet ravaged by deadly storms, or an unlikely connection made with one of your holographic friends. The possibly of (PG) romantic involvement is there, if pursued. 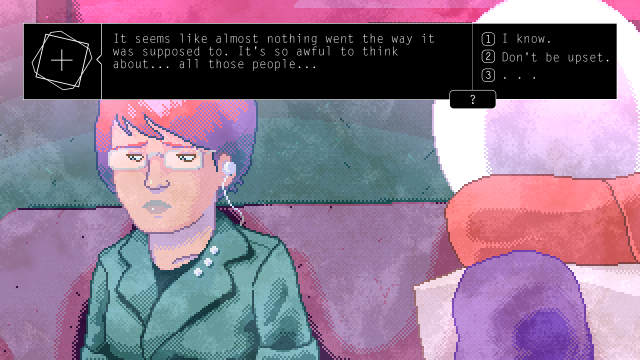 They’re holograms, but they can still get severely bummed out about things.

I didn’t wind up finding my one true holographic love. In the end it was their stories that were of more interest than any romantic overtones, and the game is perfectly capable of adapting for that being the case. There’s enough tragedy, dignified sadness, and quiet humanity to be found in the corridors and walkways of the colony’s facilities; and whether you fall for one of your companions or not, the question of whether ‘artificial’ company is enough to stave off loneliness remains high in the thematic queue.

Alone With You joins the ranks of others who have used the sci-fi lens to successfully scrutinise the human condition, but does stumble in some of its endeavours. The decision to include actual, puzzle-based gameplay rather than presenting the narrative as pure visual novel was, I think, a good one, but the pacing falls victim to its own intended sense of routine. Ultimately, I found the story of the colony’s fate took precedence over any romantic entanglement with hologram pals, but that 5-6 hour tale is a compelling essay on the anxieties of extreme isolation.

RiftStar Raiders is the new game from Climax Studios

South Park: The Fractured But Whole appears to be delayed again

By Kevin Carignan4 days ago
Reviews