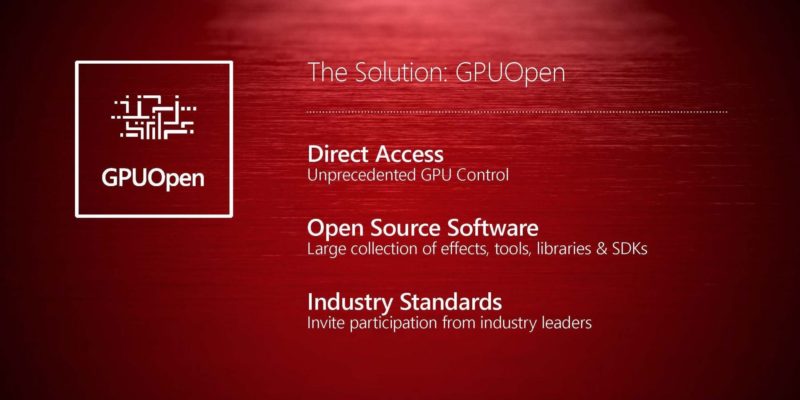 AMD has revealed that it will launch the GPUOpen platform in January, providing unrestricted, open source tools and Software Development Kits (SDKs) for any developers who wish to use them in their games.

The company (who are currently playing catch-up in the GPU market) are no doubt hoping that this will compete with, and provide a contrasting approach to, Nvidia’s closed set-up, Gameworks.

Gameworks has always had a somewhat contentious reputation, as the suite of tools, SDKs and effects it encompasses (TXAA, Hairworks, etc) are all the sole intellectual property of Nvidia. Effectively, you have one hardware company influencing graphics and performance through its ownership of proprietary tools. As the competing company whose GPU performance is often affected by this, AMD is clearly looking for a different path.

GPUOpen will use the MIT open source license, under which everything can be used without restriction. Anything that is part of the initial GPUOpen platform (said to be “TressFX 3.0, GeometryFX, AOFX — Ambient Occlusion–, ShadowFX, LiquidVR SDK, DirectX 11 and 12 code samples, compute tools, and several other SDKs”) will be freely available for developers to use, alter, optimise, and apply to their games.

They can also, potentially, be sold for profit by any entity.

It remains to be seen how successful this venture will be, but it theoretically opens the door for in-game graphics and performance to be pushed forwards on all platforms and hardware by combined, collaborative efforts.

Crytek’s The Climb is an Oculus exclusive VR climbing title