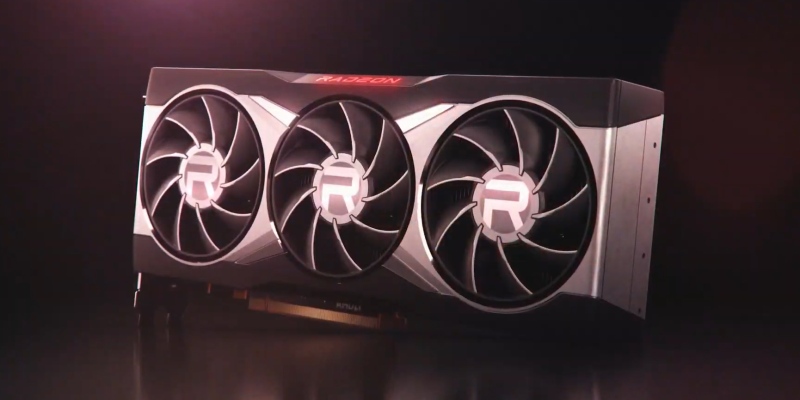 AMD held its Zen 3 event today where it revealed its impressive Ryzen 5000 Series CPUs and new architecture. What we didn’t expect though, was a teaser for the RDNA 2 Radeon GPU event scheduled for October 28. AMD CEO Lisa Su presented the Radeon RX 6000 Series today and it looks very capable of achieving 4K 60fps on ultra settings. In fact, Su didn’t shy away at all from showing the performance of the new product series. The reveal came with several benchmarks for popular AAA games so we know that Big Navi is the real deal.

There’s still very little we know as far as specifics for the AMD RX 6000 Series. Su showed us the physical card and it looks very impressive. Also big. Hence the nickname. The styling itself on the card should be more than enough to get PC enthusiasts excited, but the thermal design looks equally like what we want. Remember those ridiculously bad blower designs? Gone. This card looks like what you would expect from an AIB as far as the heat solution goes. We can only speak to what we saw, but triple fan designs are always a good thing.

Moving on to the more exciting stuff, it looks like this series is entirely capable of competing with Nvidia this generation. AMD did not mention which card we saw from the series today, but we know from the rumors that there is at least one other major product in the family. We may have seen the top-of the-line product today, or the lower-tier model. Regardless, we know roughly how the new GPU stacks up against the RTX 3080 now. In the benchmarks provided by AMD, we saw that this card offers 61 fps in Borderlands 3, 73 fps in Gears 5, and 88 fps in Call of Duty: Modern Warfare. These games are all on max settings while running on the new Ryzen 5900X by the way. 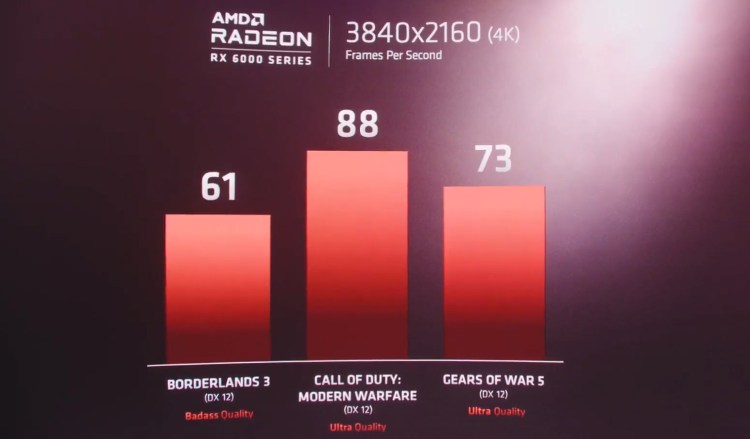 By comparison, the RTX 3080 is benchmarked at 65 fps in Borderlands 3, 80 fps in Gears 5, and 91+ fps in Call of Duty: Modern Warfare at 4K. These are of course general benchmarks though, and ran on the Intel 10900k which AMD claims to surpass in most cases now. The results are still hard to argue with though, because many will likely opt to go with full AMD systems in the future if they are looking for new setups, and it looks like they will be in good hands. It will be curious to see how these GPUs perform on Intel CPUs. We’re stuck waiting like you for now though.

Is it bright, sunny, and reflective for Radeon though?

Unfortunately ray-tracing was not discussed at all today. That’s sure to come on October 28, but it will be interesting to see how AMD fairs with the fancy new lighting craze. The company clearly has a strategy to offer it, but as we’ve seen with Nvidia, the 4K ray tracing dream may still not be a reality. While Microsoft claims its next-gen Xbox Series X console will deliver 4K 60fps with ray tracing, we recommend taking that with a grain of salt. Stay tuned.

This was a great and unexpected surprise today, but we’re eagerly looking forward to more information on things like price, power usage, manufacturing specs, the full family reveal, and more on October 28. Things are certainly looking good for AMD at the moment, but there’s still even more to come.