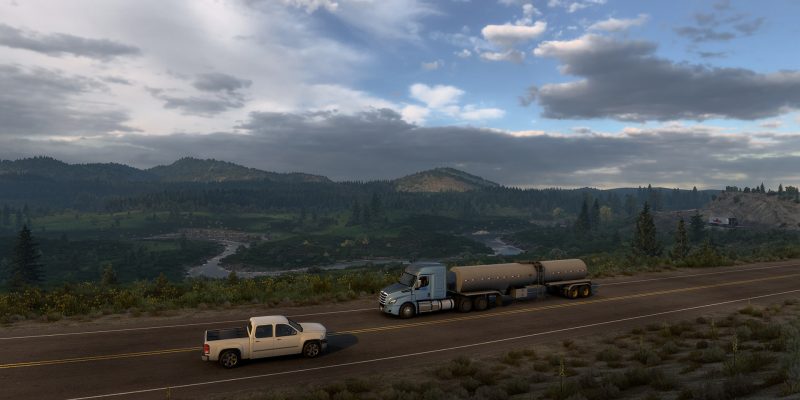 The upcoming Wyoming map expansion for American Truck Simulator finally received a gameplay reveal. SCS has produced a near half-hour video that shows off the in-game version of Wyoming, following a route from the city of Riverton to Jackson.

Wyoming’s unique architecture and some of its striking natural landmarks are shown off in this gameplay video. And since it lacks commentary, you can literally sit back, relax and enjoy it like a virtual road trip. Though it’s still considered a “work in progress,” one commenter for the video stated they followed the route along using Apple Maps. It turns out that SCS “really did their homework” for the region.

With each new expansion, SCS’ designers have been working to create increasingly more detailed environments to provide more authentic virtual recreations of the real-world maps that the scenes are based on. Though Wyoming pales in comparison to the sheer size of American Truck Simulator’s upcoming Texas expansion, the team is still committed to providing an authentic experience.

For the past few weeks leading up to the release of the Wyoming expansion, SCS has been gradually showing off more and more aspects of what the designers have been working on. This includes elements such as the state’s road network and an extensive network of bodies of water.

Though the American Truck Simulator team is showing off more and more, Wyoming still only appears on the Steam storefront with an ambiguous “coming soon” label. That said, the opening of the news floodgates for the expansion, alongside extensive reveals of the new map, suggest that the release isn’t too far off. It wouldn’t be surprising if the expansion is ready to roll off the lot by some time in July, if not August.

You can check out the full length gameplay trailer for the American Truck Simulator: Wyoming expansion below.