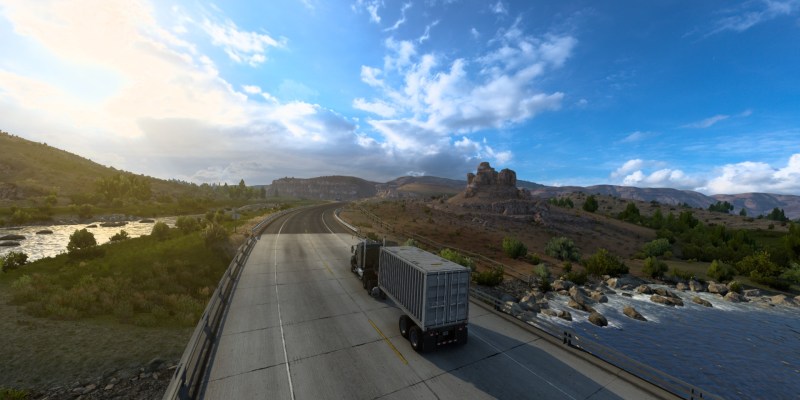 As American Truck Simulator continues to push further to the east across the US, one thing remains clear: this part of the country truly is a nature lover’s dream. That’s all I could think of as I explored the nearly perfectly square-shaped state of Wyoming. As the 10th largest state in the contiguous US, it certainly has a lot of space. But, it also happens to be the least populated state in the entire country; even having fewer people than the rugged frontier of Alaska.

Thus, I was intrigued as to how SCS would handle a state that can arguably be said to have “nothing much.” Spoiler alert: many people may not live here, but that makes the views all that much more impressive.

Crossing into Wyoming from the southwestern corner near the Utah border, I didn’t immediately notice a difference. In fact, I totally missed the sign informing me that I passed the border. But it didn’t take long before I arrived at the first point of the map, a small town called Evanston. Immediately, the rich, country atmosphere of the state was thrown at me. The town’s rustic aesthetic, the semi-arid landscape, and the well-animated cowboys doing horseback practice at a small rodeo pretty much set the whole scene up for the rest of the state. 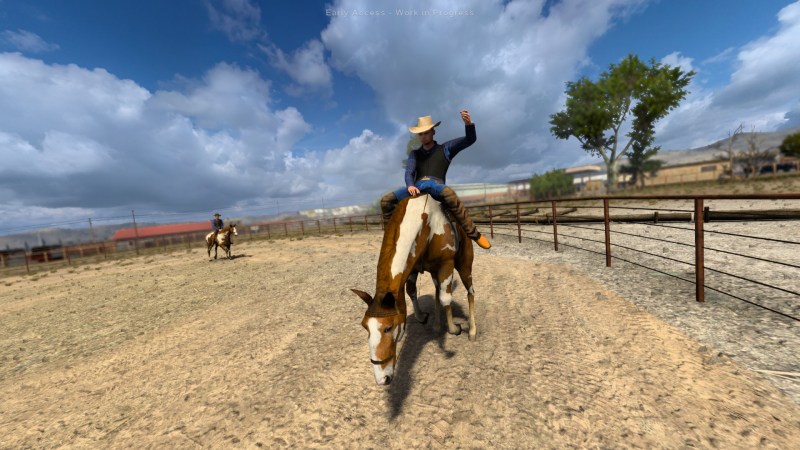 While much of Wyoming is very Western in that aspect, it wasn’t quite as rootin’ and tootin’ as I was expecting — at least not in the way Texas is bound to be. Wyoming has a lot of cattle farms, wide-open plains, and rugged towns, but perhaps due to the lack of people, everything is rather cozy and quaint. That is, except for this state’s many gorgeous natural features. Having said that, after leaving Evanston to head northwest to Rock Springs, it didn’t take long for me to get acquainted with Wyoming’s sights.

Realizing how fitting its name is, the journey to Rock Springs was filled with beautiful canyons and rock formations. There’s also a lot of similar natural features within the city’s limits. Here, I also encountered the first of what became a very unexpected commonality around the state: super-truck stops. 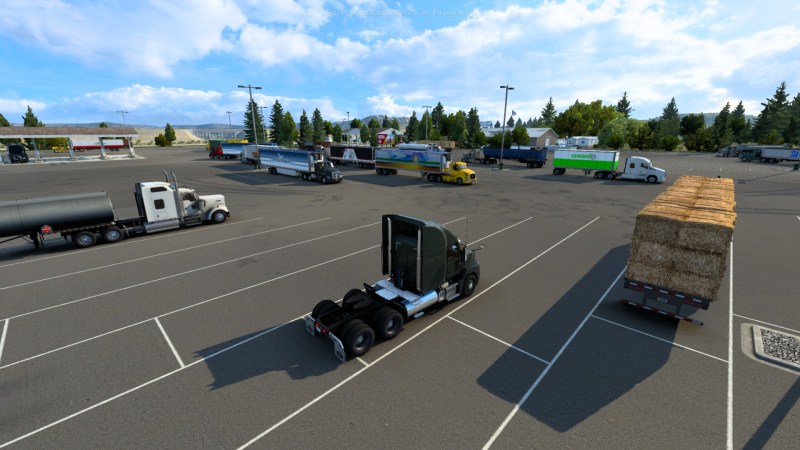 The gang is all here.

I’m calling them “super” due to the sheer size of the complexes; dozens of animated trucks moving through at a time, complete with a resting area filled with stationary ones, too. Rows and rows of gas stations, a weighing station, and a repair shop are also available.

This particular one in Rock Springs, aptly named Little America,  is probably the largest in the state, though the handful of others aren’t that much smaller. Wyoming isn’t the first state in American Truck Simulator to have these, but I don’t recall any particular state prior to having had such an abundance on its own. But, it does make sense.

Despite Wyoming being sparsely populated, this is a state that is very well connected in terms of major highway networks. A lot of semis pass through here, making the abundance of big truck stops rather appropriate. Just north of this was one of a few huge mines. They look quite imposing and raw compared to the natural formations around the state, but somehow visually appealing in their own way. The real Wyoming does have a lot of heavy industries, so SCS clearly did its homework. 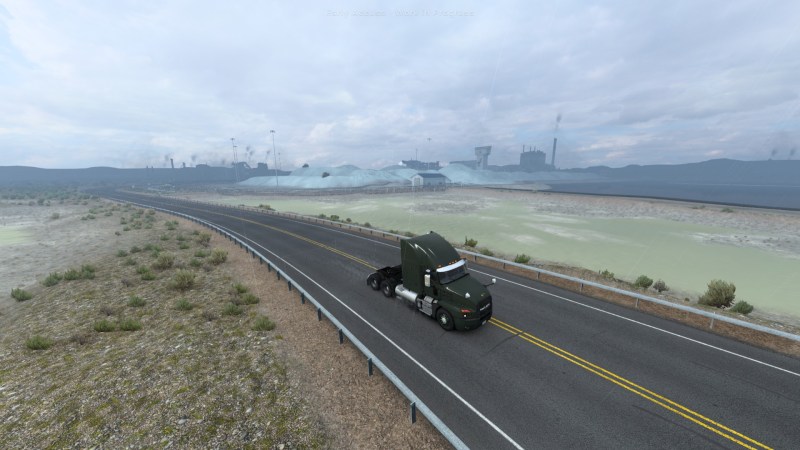 With so little population, Wyoming’s abundant space is used a lot for heavy industry.

Heading back on the road, the next leg of the journey took me from Rock Springs to Casper. The epic canyon scenery continued along the way, though this is where the scenery began to change. As I moved northward into the state’s interior, more greenery started to sprout up. As for Casper itself, I was surprised to find how modern-looking it is. Again, Wyoming isn’t as rusty and dusty as the more southern states like many parts of New Mexico and Nevada. But the real surprise of city aesthetics wouldn’t come until later.

From Casper, I moved on to Cheyenne, which just so happens to be Wyoming’s capital and largest city. Despite this being the capital, there’s not much of an urban center represented here. Considering the real-life city only has a population of about 64,000 people, this isn’t too surprising. From here, I did a quick shuttle run to the much smaller town of Laramie, before picking up a special transport from there that would then take me into Rawlins. I completed the job in the evening, just as the blazing and golden setting sun dipped below the low-rolling rock formations. It was a beautiful sight.

After this, I ended up having to go back to Casper in order to find jobs that would finally push me towards the remaining cities to the north of the state. Farmlands were aplenty, and the greenery rolled on. After landing back in Casper, I finally got to push northward to Gillette, once again piloting a special transport. The route was filled with wide-open plains, quite different than the canyons that are towards the more southern parts of the state. Once I arrived in Gillette, I ventured northward to check out a lonely road that culminates at Devil’s Tower, a striking down-shaped rock that looms a hundred miles away from the town. Just like the state’s other natural features, the monument is extremely well detailed here in American Truck Simulator. 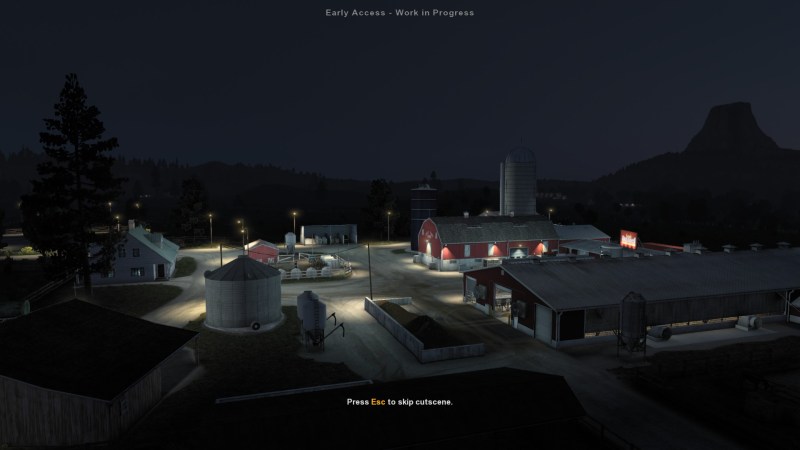 Devil’s Tower looming over a farm.

From Gillette, I scooted back down south to Riverton, which was about the longest continuous drive of my initial Wyoming journey. A lot of it was maneuvering through the state’s rolling hills; this really isn’t a flat place at all, though its roads are not nearly as elevated as the more mountainous states like Oregon and Washington. The scenery was quite varied along this route, giving me a chance to see the Great Plains, sprawling fields, and more rock formations all in the same drive. I also took a small detour to the city of Sheridan, just to pay it a visit.

Once I turned back towards the direction of Riverton, I encountered the striking sight of Hell’s Half Acre. It’s known as a “scarp,” which is comprised of deep ravines, caves, and rock formations. 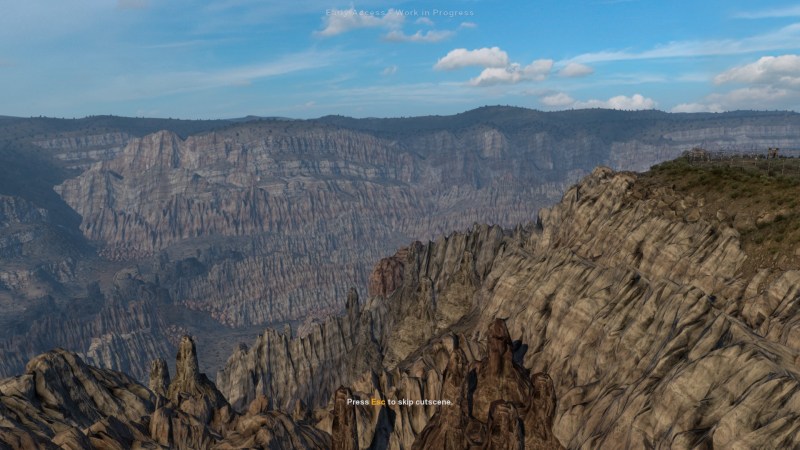 The imposing Hell’s Half Acre.

Seeing this completely cemented in my mind that SCS’ scenery designers absolutely had a field day crafting this state, as just about every geographical feature in the digital state looks gorgeous. Another striking point of interest in the area is Boysen State Park, which sits just north of Riverton.

Having been pleased with the wealth of sights thus far, it was finally time to take one final big drive to the last city of Jackson, which lies to the far northwest of the map, bordering Idaho. Despite me having to do some backtracking earlier in the journey, I’m glad I ended up driving here as the last leg of the trip; it couldn’t have been a better pick for being the “grand finale.” 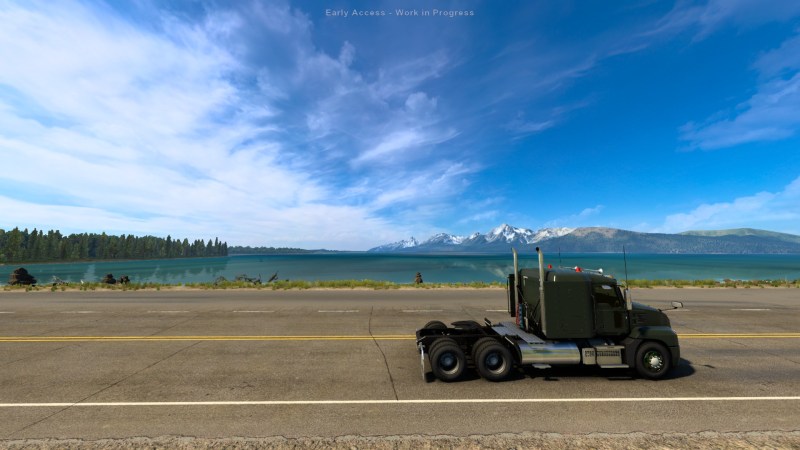 Taking the northern route, which comprises of State Road 26 and 287, I ended up riding through an extremely green swath of the state. This eventually transformed into the intimidating Rocky Mountains (also seen in Colorado) standing tall and stoic along the entire horizon.

But, the real icing on the cake is the one-two punch of having both Grand Teton and the world-famous Yellowstone National Park being featured. While Grand Teton is mostly covered here, the tiny piece of Yellowstone that’s also present is absolutely worth the extra 15-minute drive along a singular road that shoots north of Jackson. Don’t even bother bringing a trailer, just go and enjoy the beautiful forests, immensely blue lakes, and take a gander at the geysers. 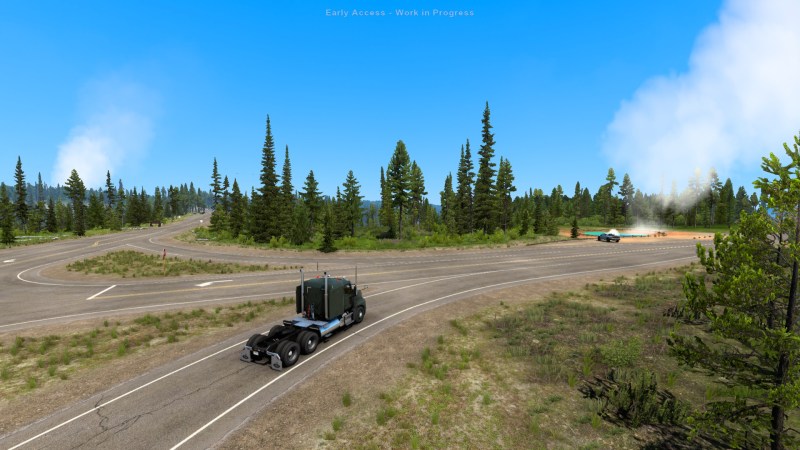 Not to be outdone, Yellowstone shows off its geysers.

If the natural features weren’t enough, then the last stop of the city of Jackson really sold this whole expansion for me. Its aesthetic here in American Truck Simulator is so beautiful, that it made me want to see the real deal. It has an old-town look, but one that’s clearly been preserved and heavily maintained.

Combine that with the heavily manicured greenspace and million-dollar architectural designs all over the place, all with the beautiful backdrop of the Rockies, and you have what’s arguably one of the most picturesque towns in the entire sim. I absolutely loved driving through here, and would recommend it as the last stop on your Wyoming tour. If not that, then at least make it the incredible beginning. 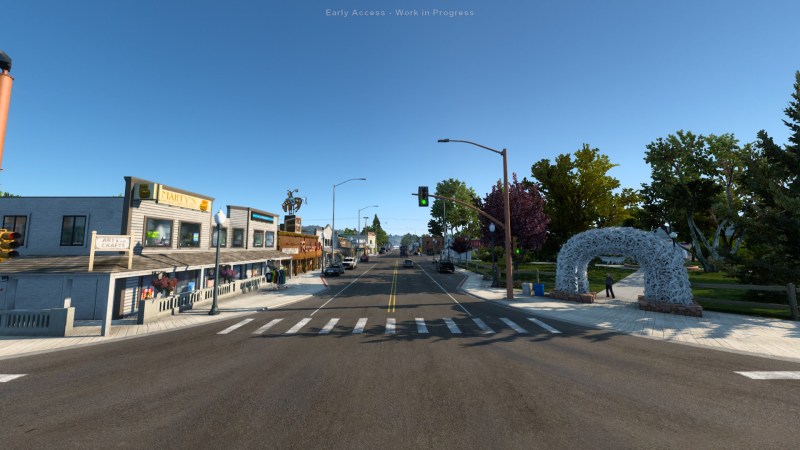 The city of Jackson doesn’t need to be this pretty, yet it is.

Here’s ‘Wy’ you need Wyoming in your life

After starting in Evanston and ending in Jackson, my total time covering American Truck Simulator’s Wyoming took me just under a whopping nine hours; and that’s still without having traversed every road. It’s safe to say you’ll have quite a lot to see and experience in this mammoth of a state.

It may not be big on people, but it is big on photo ops. With epic canyons, rolling plains, gorgeous forests, and nearly everything in between, Wyoming has been one of the most enjoyable states to drive through thus far. SCS once again sets the bar high with its attention to detail. There are so many animated background elements, that each corner of the map feels authentic and alive. Not to mention the generous speed limit of 70-80 mph along most of the highways makes the traversal of this large state a lot more rapid.

Beyond this, we know that Texas is in the works. But I have a hunch that Wyoming’s northern sister state of Montana is really going to be the next playground. After experiencing this, I’m more than excited to check out what SCS has in store. 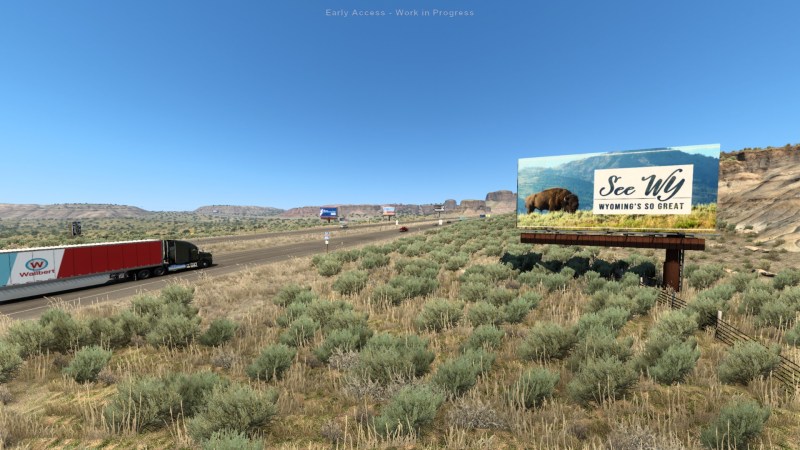 And great, she is!

Kitaria Fables review — No, it’s not a Stardew Valley clone

By Martynas Klimas10 hours ago
Previews