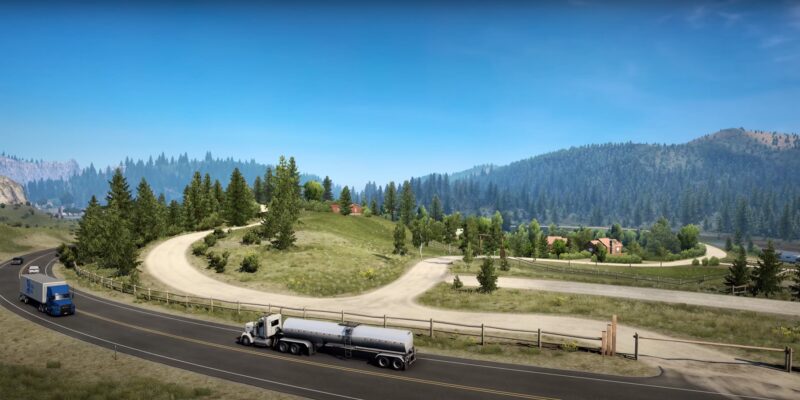 SCS Software has finally unveiled the release date for its next expansion for American Truck Simulator – Wyoming. The new expansion pushes the sim’s official map westward into a state that’s renowned for its striking beauty and wide, open landscapes. This is the sixth paid map expansion for American Truck Simulator since its initial release, and it pushes the game’s scenery complexity a little bit further.

After teasing fans for several weeks with a slow trickle of minor reveals and informational tidbits, the developer has released a full overview video that shows off various famous landmarks of Wyoming, both natural and manmade, in American Truck Simulator. Of course, the long-awaited reveal of the expansion’s release date has also arrived: September 7.

As short as the new gameplay trailer is, the scenes that it shows off look nothing short of magical. Especially when compared to older environments in American Truck Simulator, Wyoming is clearly alive and well-detailed. This is the state known for being a geographical giant. To the west, it’s covered by the Rocky Mountains. The east contains the flat and open High Plains. Two massive national parks are also located within its borders, Grand Teton and the world-famous Yellowstone. Despite it being big on sightseeing, not many people actually live in Wyoming. It’s the least most populated state in all of the USA, even though it’s the 10th largest in terms of land mass.

While population numbers are low, its road network is well-traveled by truckers. The most popular cargo types are livestock, farm crops, coal, and natural gas. All of these resources are accurately showcased in the DLC, so SCS has clearly done its homework. Wyoming is also known for having some pretty wicked weather during different parts of the year, which the trailer also acknowledges by showing off some storm footage.

The Wyoming map expansion for American Truck Simulator is currently available for wishlist on Steam. Like all of the sim’s other map expansions, it’s likely going to cost $11.99 when it launches in just a matter of days.