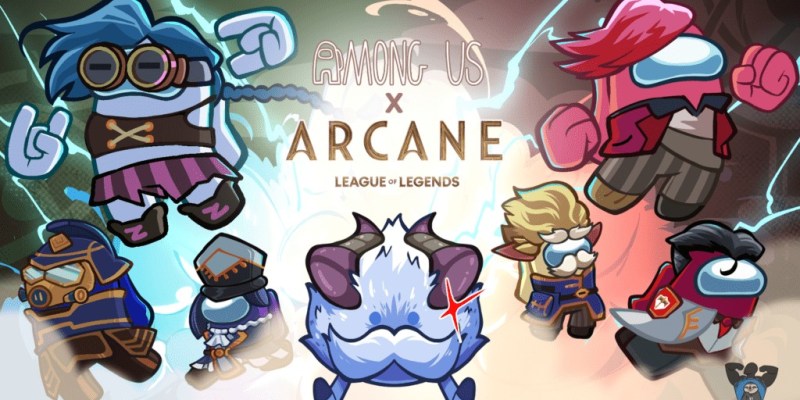 At this point, both Among Us and League of Legends remain some of the most popular games on the market. With this in mind, it makes sense that that the two brands would eventually cross over. Although the recently announced League of Legends content in Among Us doesn’t entail a new map or anything major like that, it does come in the form of some fun cosmetics based on some of the characters from the Arcane TV series. These cosmetics will only remain available for a limited time, specifically from today until December 31.

According to a press release, the crossover event between Among Us and Arcane offers cosmetic items based on recognizable faces like Heimerdinger, Caitlyn, Jayce, Vi, and Jinx. These items will come in what Among Us calls “the first ever Cosmicube,” dubbed the Arcane Cosmicube. To clarify, Cosmicubes represent Among Us’s brand new unlockable cosmetics system. Essentially, players can buy collections of cosmetics that all center around a specific theme, and once they do so, they can “activate it to obtain Pods through gameplay.” Players can “use those Pods to unlock cosmetics via a branching path system within the Cosmicube.” The developers have ensured that none of these cosmetics will give players any kind of edge in gameplay, as they only exist for aesthetic purposes.

Among Us dabbles in microtransactions

Fans of both League of Legends and Among Us will likely jump at the opportunity to obtain these cosmetics. These cosmetics come at a price, however. Players will need to fork over 80 stars, roughly the equivalent of $8 USD, to obtain them. Understandably, many will not want to purchase microtransactions like this on principle. But at the very least, developer Innersloth honestly, yet wittily, explained in the recent Cosmicubes trailer that they are using the microtransactions for real-world needs such as food and therapy. As the trailer aptly puts it, “we live in a capitalist society.”