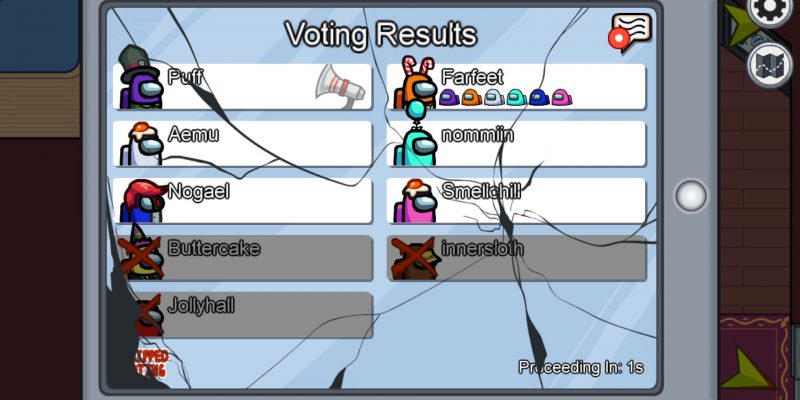 InnerSloth is all about keeping fans in the loop when it comes to Among Us. That’s why the developer released a quick dev log yesterday regarding its progress on an upcoming update for the social deception game. The report wasn’t too lengthy, but it did reveal some key changes on their way to Among Us, including bigger player lobbies and new crewmate colors.

According to InnerSloth’s progress report, the team is working to increase lobby sizes. Currently, the max number of players in a match sits at 10, but InnerSloth will soon allow up to 15 players. Of course, the game itself will also need some tweaking to accommodate 15 players, which means an updated meeting screen. InnerSloth said that players should “expect a bit of reworking” on the meeting screen, where players discuss who to eliminate from the round.

The dev log also included a sneak peek at a “new intro” to the meeting screen. An image showed one name in the center, grayed out to indicate a death between rounds. Meanwhile, the corner showed the name of the person who called the meeting. It looks like this will be meant to ensure that everyone knows at the start of each round who was killed and who reported the body.

InnerSloth also teased that six new crewmate colors are on their way to Among Us. The dev log did not confirm which colors are coming, but we should expect to hear about them in May. Despite the new color additions, InnerSloth is actually looking at alternative ways to differentiate players to better accommodate “colorblindness and accessibility.” While each player does have a username, most players refer to each other in-game as Red, Blue, Cyan, etc.

InnerSloth has been working to fix some bugs since its last major update in early April. Along with the highly-anticipated Airship map, the last update added a new account system to make it easier to report misbehaving players. InnerSloth has since made a few “miscellaneous fixes” to the system, including one where players can change their username.

At the moment, there’s no word on the date of the next update. However, InnerSloth made it clear that it hasn’t stopped grinding since the Airship update. Apparently, there is “always a little secret something in the works.” Hopefully, we should see an Among Us update with new crewmate colors and bigger lobbies some time next month.

Rumor: AMD no longer launching Zen 3+ or any refreshed Ryzen CPUs in 2021