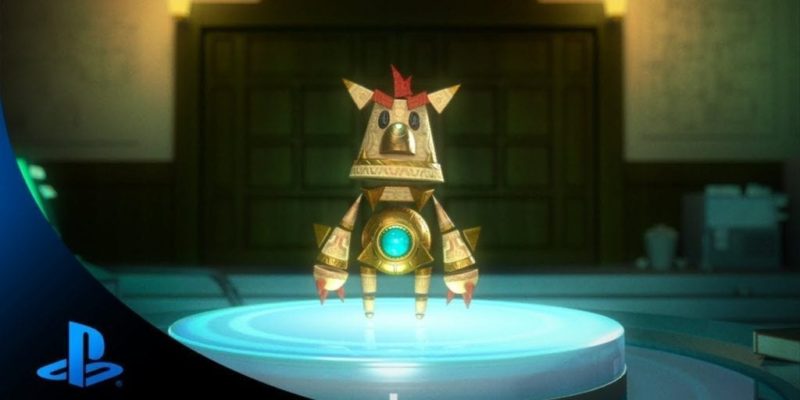 I’m sure a number of you will have watched the Playstation Meeting just last month, February 20th, where Sony unveiled the first details for the Playstation 4 and was also the platform where they debuted of a handful of next gen games. But one of the things I found to be slightly bemusing is the absence of coverage for the first game we were all shown. I’m talking of course about Knack.

Firstly, The game certainly had a lot going for it. Aside from the fact that the game was the first to be shown, it received an extremely welcoming presentation thanks to Mark Cerny, lead system architect for the Playstation 4, but who is most well known for his work on games such as Crash Bandicoot and Marble Madness. Cerny delivered the presentation for Knack in a manner that spoke directly to the child-gamer most of us once used to be. For myself at least, I felt that it tapped into the  same excitement that many of Cerny’s previous projects provided, and also are heralded as classics now.

Aside from the benefit it received from the presenter, Knack also made a great showcase for the Playstation 4 both graphically and technically. Thanks to the work of Sony’s Japan Studio also lead by Cerny, the game is looking incredible so far, to the point that it’s almost comparable to some past Disney movies. Not a great deal of information was revealed regarding how the game will utilize the new features of the Playstation 4, but given Cerny’s position it’s highly likely that it will make use of a variety of the new systems features.

The game will revolve around a mysterious 3-foot creature called Knack who has some very interesting powers. Throughout the game Knack will find a variety of relics which he will be able to absorb into his body, allowing him to grow exponentially. In the footage shown so far it’s evident that the player will be able to grow to the size of small buildings to combat tanks, and given that Cerny said the mechanic is similar to what we see in the Katamari games, that’s probably only scratching the surface of the size that Knack could reach, though that is pure speculation for now.

The ability for the protagonist to grow is also quite a visual spectacle, the work of the developers and the technology of the Unreal Engine 4 have come together to allow a fantastic display of fidelity. The amount of physics in use on the main character is leaps and bounds beyond anything we have seen so far on a single character, with Knack magnetizing lots of various objects to his body for his transformation and delivering devastating attacks that are topped off with a large amount of particle effects, the overall result is astounding, yet not a single bit of the environment appears any less appealing despite the fact that a large amount of power will be going into the protagonist alone.

All of these wonderful visual effects would be nothing though without an appropriate art style to back it up, and again Knack delivers in this department too. The cartoon art style is a perfect partner for the technology and hammers home that feel of an action/platform game that is purely about fun, regardless of the players age. It’s likely that this approach to the artistic style also frees up some extra power for the physics simulations too, but it’s handled well and as a result doesn’t depreciate the overall visual quality, instead it defines the overall tone of the game.

The story begins when a scientist with a slightly crazy undertone, simple named The Doctor, finds a way to bind past relics together into a conscious being, the result of which is Knack. The human race is under threat by a goblin army which the player will of course be encountering for a portion of the game, however this isn’t the only problem facing mankind. There’s also a far greater threat, but we’re going to have to wait a bit longer to find out just what that threat is.

The entire game sounds like a lot of fun so far whilst also showing a major jump for a genre that isn’t catered to as regularly as it used to be, so why has this game been overlooked so far? Let’s take a look at some of the factors that could have played a role in the absence of coverage.

The obvious choice would be that the platform genre just doesn’t have the same popularity that it used to have, but this couldn’t be the entire cause as there have been games that prove this theory wrong. For instance the Playstation 3 exclusive Journey which took home a variety of awards and also took the spot of highest selling PSN game to date, and the main games from the Mario franchise which regularly see high sales. But this doesn’t mean the factor is entirely crossed off the list.

Knack also went up against some established franchises of this generation, the particular game that may have had the biggest role to play is Killzone 4. Not only does the game have the advantage of being an already established franchise rather than a new IP like Knack but it also had an extra edge since it is a first-person shooter. Undeniably, the FPS genre is the home of the majority of the console gaming community currently, and as a result Killzone 4 will receive the most coverage. Not to mention that Ubisoft’s Watch Dogs, Sucker Punch’s Infamous: Second Son and even Capcom’s new Panta Rhei engine all garnered a large amount of attention too.

Another possibility could be the lack of details at the actual presentation. Aside from what we were shown in the trailer, very little else was said about the game. However information continued to flow afterwards, and a number of sites haven’t picked up on this new information. It is possible that since the presentation was considerably shorter than some of the other showing, however it did show actual gameplay, something that neither Infamous: Second Son or the Panta Rhei engine showed, both of which had an equally similar runtime too. This factor shouldn’t have had too much impact, if any at all.

In all likelihood, it’s probably due to the culmination of each reason provided above, however I can’t help but feel that this alone shouldn’t be enough to detract so much attention from a game that is targeting a market which a number of gamers regularly request more new IPs. Mark Cerny himself even stated his intentions for the game on the Playstation Blog.

I’m hoping that we can make something that excites those that played the classic games back in the day, as well as something that attracts new fans to the genre.

Personally I hope when the game is next shown it’s also given a larger window in which to show us exactly what it’s all about, which in turn could help the game get some of the attention it deserves. Although the details are still reasonably scarce on the game, the building blocks for a great game have been shown. Provided the next showing goes the extra mile to give us and idea of what we can expect from Knack that no game before it could offer, the media will also put in the extra time to get more coverage out to the readers, well hopefully anyway.

If there’s one last good thing I can leave you with though, it’s that we shouldn’t be waiting too long to see more from Knack thankfully, as Cerny also stated:

“This is just a small taste of what’s in store and you’ll be hearing more about Knack and how it plays on PS4 very soon.”