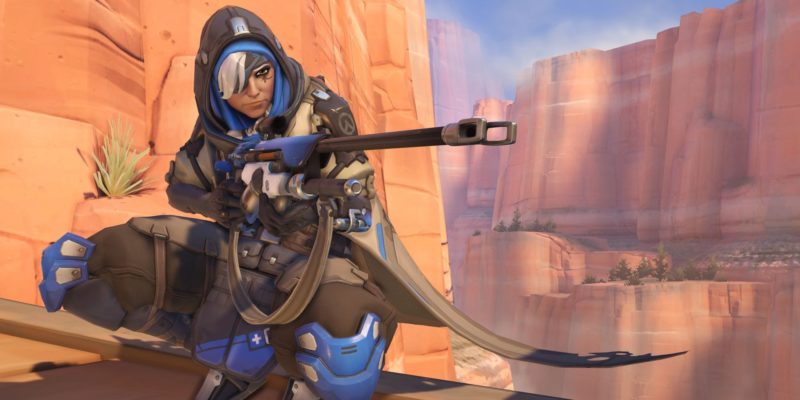 After a spell on the PTR, the new support hero Ana is now live on the servers with the Overwatch 1.10 update.

The new cap of one hero per match in Competitive Mode is also live along with the Overtime changes which were tested on the PTR.

Developer Notes: D.Va isn’t being selected as often as our other tanks, and we feel a lot of that stems from the underperformance of her damage absorption abilities. So, we’ve reconfigured her Defensive Matrix, making it more flexible and giving players the ability to use it more often. We’ve also given Self-Destruct a little more oomph, because it felt slightly underwhelming when compared to many of Overwatch’s other ultimate abilities.

Developer Notes: While the game does feel better following the nerf to McCree’s close-range damage in a previous patch, it left him a little too weak. So, we’re increasing his effective distance, making his range similar to Soldier: 76’s. This should hopefully give players another option for dealing with pesky long-range damage dealing heroes like Pharah and Hanzo.

Developer Notes: Mercy’s ultimate is one of the most powerful abilities in the game; however, players would often fly into the fray and die while using it. With this update, Resurrect will now take a bit longer to charge, but Mercy will be a lot safer when activating the ability in the middle of combat.

Developer Notes: While Zenyatta has never had the healing abilities of Lúcio or Mercy, he made up for it by dealing more damage. However, his lack of mobility and low health has meant he’s struggled to find a place in many games. To increase his effectiveness, we’ve made several changes, the biggest of which is an increased shield pool. This will allow him to go head-to-head with more enemies. The Orb of Harmony and Discord changes are also a quality of life change, helping Zenyatta move his orbs around and apply their effects more quickly. And lastly, we’ve increased Transcendence’s healing throughput. This ultimate was designed to be the most effective against sustained, high-damage fire and least effective against short, high-damage bursts (like D.Va’s or Junkrat’s ultimates). But, due to the amount of healing it provided, there were times when it was possible for even sustained fire to overcome Transcendence’s output. We’ve made the heal powerful and also allowed Zenyatta to move around more quickly while it’s activ