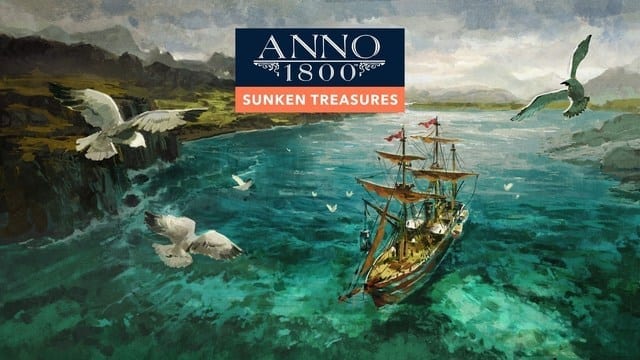 Anno 1800 released back on April 16 as a Uplay and Epic Games Store exclusive, and according to Ubisoft, it became the fastest-selling entry in the series. The verdict of our review was of an above-average game with some questionable design choices. Our technical review also highlighted some graphical shortcomings. If you’re interested, you might want to check out some quick and easy tips. In any case, Ubisoft has now announced that the first DLC for the game, Sunken Treasures, will launch on July 30.

The dev blog includes a lot of details on what players can expect in this first sizeable DLC expansion. It will be available for sale both as part of the Season Pass and as a standalone purchase on release day.

Anno 1800: Sunken Treasures and beyond

Sunken Treasures, as the name suggests, will set you on a quest for glory and riches in the high seas. You’ll get to make history, erecting a new capital in order to help a dwindling empire restore its former glory. The DLC will feature an epic questline to expand on the world of Anno 1800 and the background of its characters. When you reach 700 Artisans for save games both new and old, the game will give you access to a whole new European session called Cape Trelawney. This will be the start of Sunken Treasures‘ epic questline.

The main storyline will feature up to six hours of playtime, plus dozens of new additional side quests. It will also include a third session, with new small, medium, and large islands, as well as a continental island three times as large as the previously biggest island in the game. An additional third-party trader called Old Nate will provide players access to a brand new crafting and diving bell feature. There are also over 100 new items, which include quest items, and dozens of inventions to craft, with additional specialists and new sets for your museums and zoos.

You can purchase the Anno 1800 Season Pass from the Epic Games Store or the Ubisoft Store. The Sunken Treasures DLC and all subsequent DLCs will also be available to purchase as standalone titles on release day.

What do you think of Sunken Treasures? Does it look like a decent piece of extra content? Drop your comments below and tell us what you think!