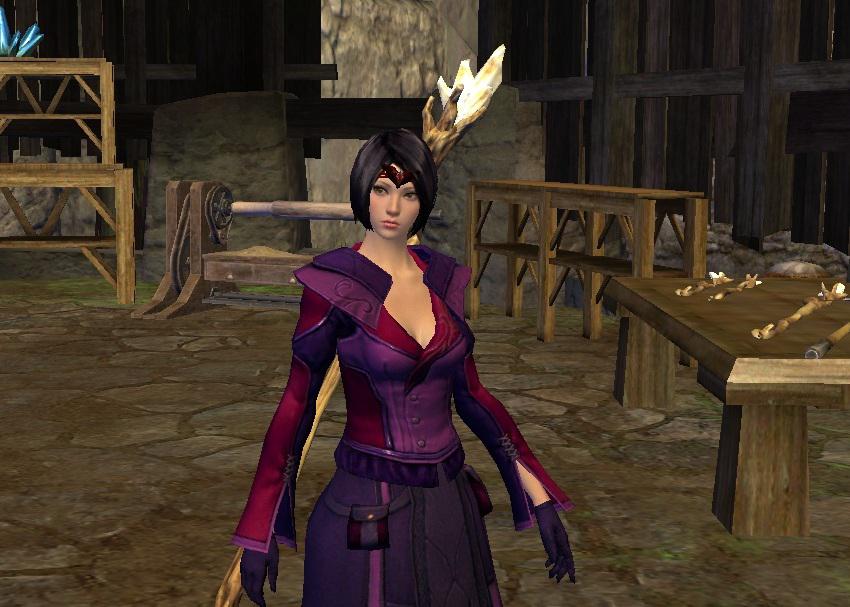 I spent the first three hours creating my character.

That’s not an exaggeration: the first time I logged into Guild Wars 2, I was so overwhelmed by options I alt-tabbed to Skype and cried. I sat there for an hour trying to decide what race, what gender, and what class to be. Then – once I’d made my decisions – I started fiddling with the psychotically detailed sliders that define your character’s face to within a millimetre of your specifications. What sort of depraved maniac thought a “length of nose bridge” slider was a good idea? Why is that even an option? But it’s there, so I have to adjust it until it’s just so.

Having done all of this, I promptly changed my mind about race and class and started the whole process again. And then, while deciding on my character’s backstory after finally getting everything else set in stone – or set in cold, unfeeling data, anyway – I alt-tabbed for so long that the game disconnected me.

It took me three hours from booting the program before I fireballed my first centaur in the face. And no, I’m not sure why there’s a mutant Minnie Mouse as a character creation choice either. 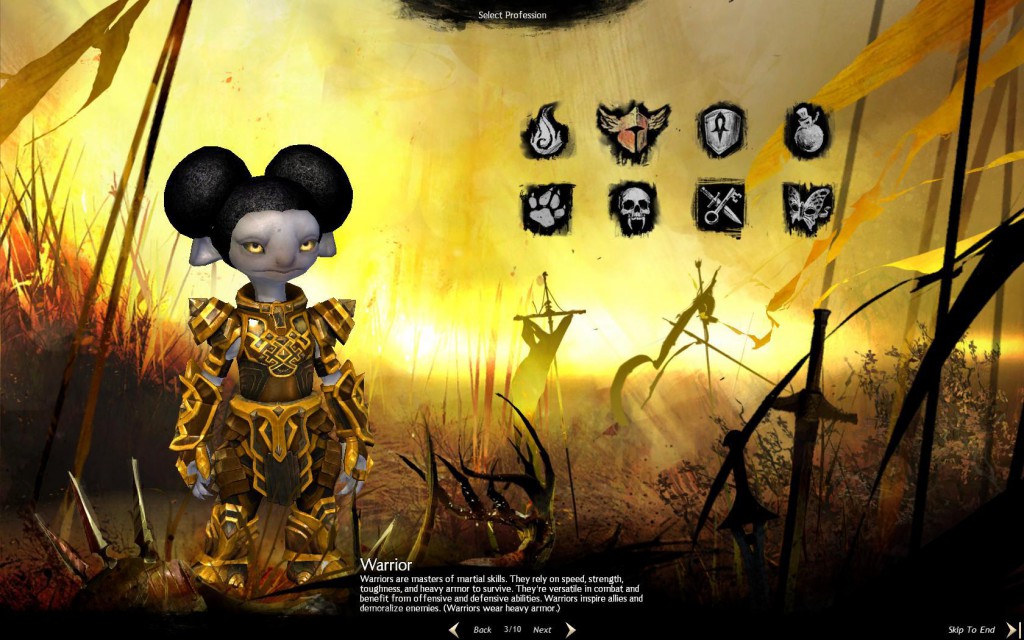 Paul’s already posted up some impressions of the early game, so I’m not going to cover the same ground. I’ll quickly note that I’ve dabbled in PvE (early impressions: some nice touches, some impressive streamlining, some bits that I’m less sure about, but still reasonably standard MMO fare) and PvP (manic, chaotic, but with enough potential for precision that I’m looking forward to getting into it properly) but detailed thoughts on those will have to wait until the review, which will probably be next week if I forgo sleeping. The things I do for you people, honestly.

Instead, I’m today going to give you some impressions on the game’s WvW mode, which stands for “World versus World” and is pronounced as though you’re trying to tell someone you love them through a mouthful of jam.

WvW should perhaps more accurately be called “World versus World versus World”, as it pits three servers against each other in a specially designed – and stupefyingly gigantic – battleground. Each of the servers has a massive “base” area of their own, full of structures that can be captured; in addition to this, there’s a huge neutral area full of the same. 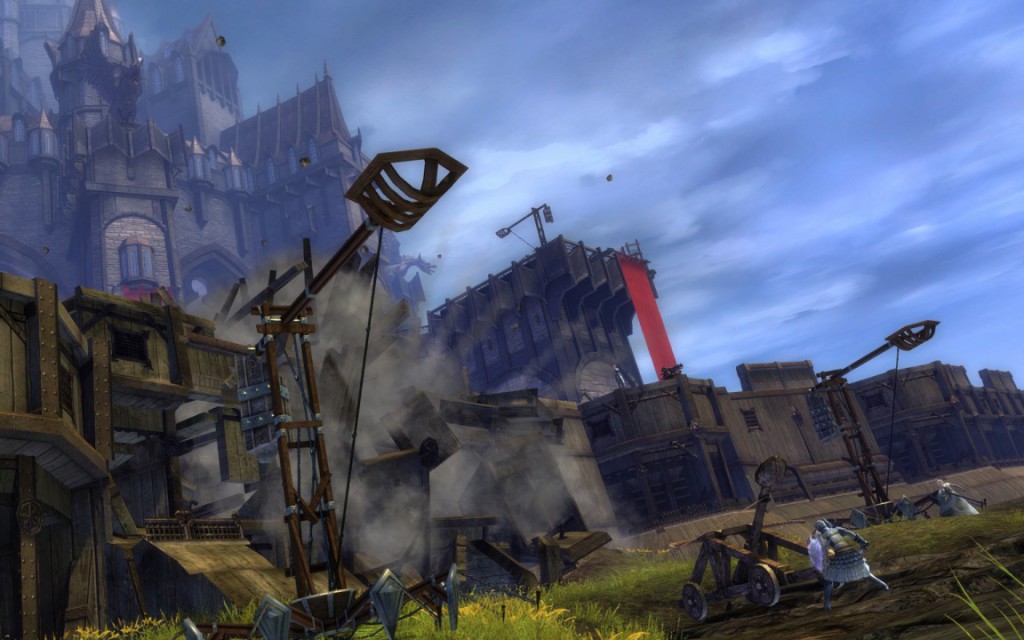 The idea is to capture enemy structures and seize control of as much territory as possible, while stopping those other-server-playing bastards from grabbing yours. There are keeps to fight over; defensive towers to stop encroaching enemies in their tracks; and resource stations that provide supplies (which allow you to purchase either offensive or defensive siege weapons), via slow-moving carts, to your outlying fortresses. Grouping up with as many players as possible is always a good idea, though smart use of supplies can allow a small force to beat back a numerically superior foe.

Supplies allow this to some extent, anyway. I’ve so far witnessed two WvW battles (as the servers against which you fight cycle) and both times, the server with the highest population has won a decisive victory. I play on a low population server, which means that – even at the best of times – a high population server is just going to have more bodies to throw into the grinder, and are more likely to have people on at 4am. I’m told this should even out a bit in future thanks to matchmaking; high-ranking servers with a lot of people playing WvW will be matched up against similar, and the same goes for low population servers where it might be a rarer activity.

But for now this is fine, as we can still end up with situations like the one that I took part in earlier today – a situation that rivals Helm’s Deep, or Rorke’s Drift. I refer, of course, to the should-be-famed defence of Dreaming Bay. And, just to illustrate how huge these battles are, I’ve circled Dreaming Bay on the map below. 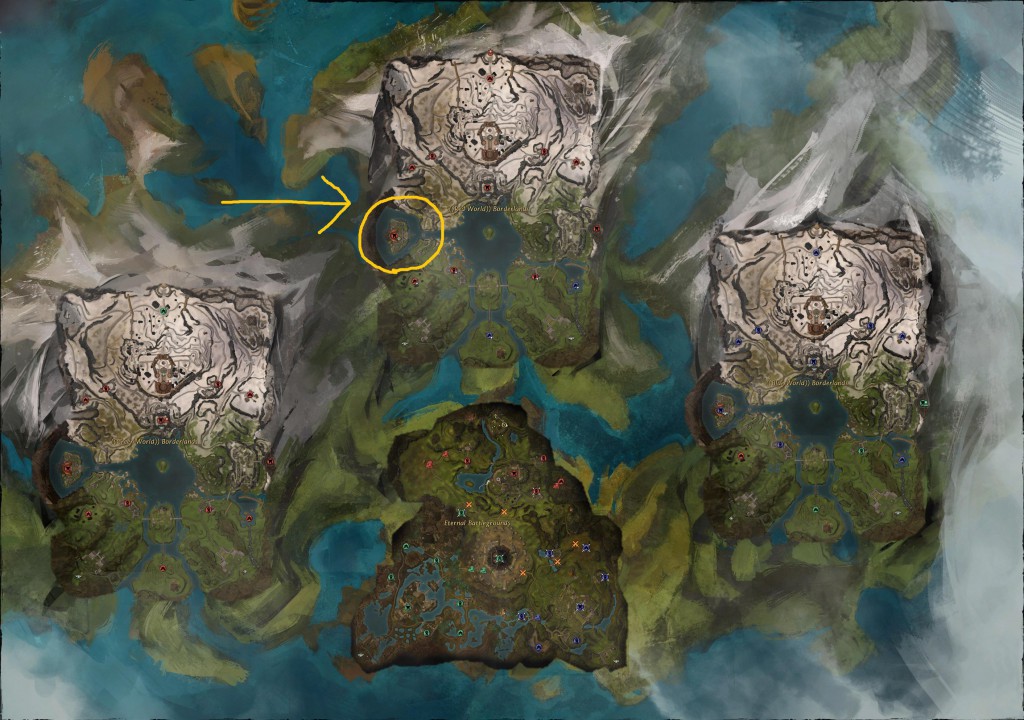 First, the setup: a high population server representing the colour Green had been encroaching on our lands, taking a number of structures on the west of our “area” of the zone, and – as Julius Caesar probably didn’t put it – this was not on. We grouped up and sallied forth, to retake the keep of Dreaming Bay.

Before this, we needed to stop their flow of supplies and distract any potential defenders. We marched south past Dreaming Bay and swiftly took a resource-producing town called Greenvale, both to stop the flow of supplies to the keep and to give the fearsome Green military a second target. A small garrison stayed there to defend it while the rest of us marched back north to take Dreaming Bay… which didn’t take long at all, as there were almost no enemy players there.

The counter-attack started when we pushed further south to try and recapture a tower. By this time the Greens had mobilised, and – barring the metric shitload (fact fans, a metric shitload is 0.8 imperial shitloads) of them storming over a bridge towards us – there were about twenty or so sat in the tower itself, raining down both hell and boiling oil. Our survivors fled, and those of us who had to respawn started the long march down again. We regrouped at Dreaming Bay. 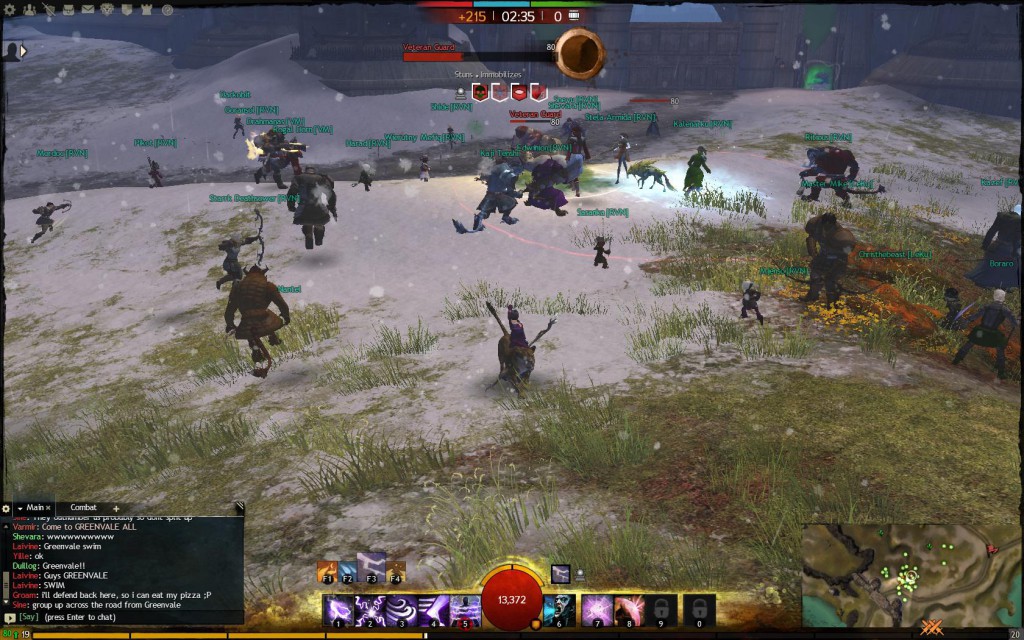 Dreaming Bay is a keep, and thus is rather well defended. There’s an outer wall with a few guards perched around it, so any would-be conquerors first need to smash down the doors (either to the north or south) – at which point the defenders can pull back to a set of inner walls, which surround the capture point itself. Further guards are stationed there, as well as a ludicrously powerful Lord who must be defeated before capture can begin.

As we were about to try and storm the tower once again, our garrison at Greenvale proclaimed that “loads of them” were there. Within 60 seconds, Greenvale’s icon had turned green. 60 seconds after that, approximately seven million Green buggers were knocking on Dreaming Bay’s south gate with a battering ram.

We were outnumbered, but we fought on. Those of us with ranged attacks sat atop the battlements raining down death on anyone who approached the gate. A few melee folks sat behind the walls repairing the doors; others leapt into the fray to try to cause some damage in close combat and distract the enemy as best as they could. And me? Well, I gave up on trying to cause damage and instead started throwing down area of effect healing spells and reviving any fallen friends. We had the positional advantage, but they had the numbers; neither of us was making a serious dent in the forces of the other. Stalemate, in short, which we were reasonably happy with – until fifteen minutes later, when the Greens set up trebuchets and catapults. 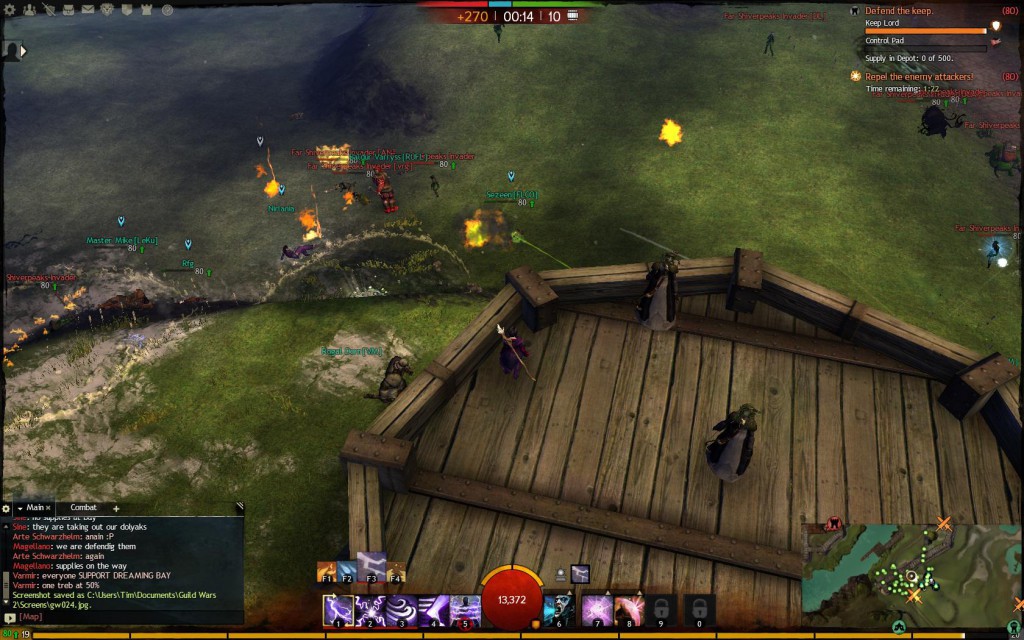 These stationary siege weapons have longer ranges than any player attack that I’m aware of and are capable of cutting through both players and walls as though they were made of delicious cake, so sitting back and waiting was no longer an option unless we wanted to lose by attrition. This called for decisive action: I leapt over the battlements and charged, leaving destruction in my wake! Or, more honestly, I took falling damage and was murdered about five feet from the gates. I’m still claiming to have played a huge part in our eventual destruction of the trebuchets, though. I’m assuming that the Green forces were so stunned by my actions that they just stood around in confusion for thirty seconds.

Bizarrely enough, my suicide-by-Greens actually turned out to a blessing. I spawned back at our main base and, after a short walk, discovered that the Greens had sent up a force to cut off our supplies and essentially starve out Dreaming Bay. I alerted the rest of the team, and – once the trebuchets had been dismantled – a small number of troops were diverted to patrol that northern road, making sure the supplies flowed and Dreaming Bay’s defence could hold on a bit longer.

Then, as it had been about an hour and a half since we first took Dreaming Bay, I logged off to eat. I’m just going to assume that we won a glorious victory and currently hold every fortification on the map, and rather than face grim reality, I’m just not going to check WvW for a few days. 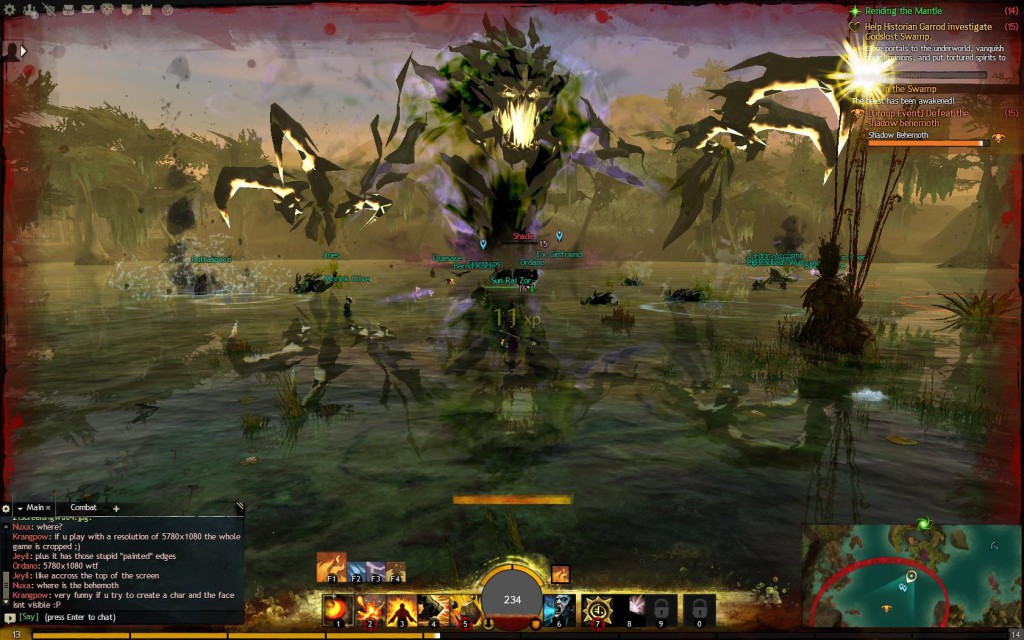 Still: WvW is a fascinating world PvP mode, and with a bit of luck this article has illustrated that. If mass combat with a degree of strategy and some unique mechanics sounds like it’s up your alley, then WvW might actually be a pretty good way to do some levelling, and it’s well worth a gander if you pick up Guild Wars 2 in the next few days. If you’re still uncertain, then – my sleeping patterns notwithstanding – we should have a full review up next week.

(Update: I checked the WvW scores. Green currently controls everything except for one tower. Oh well.)