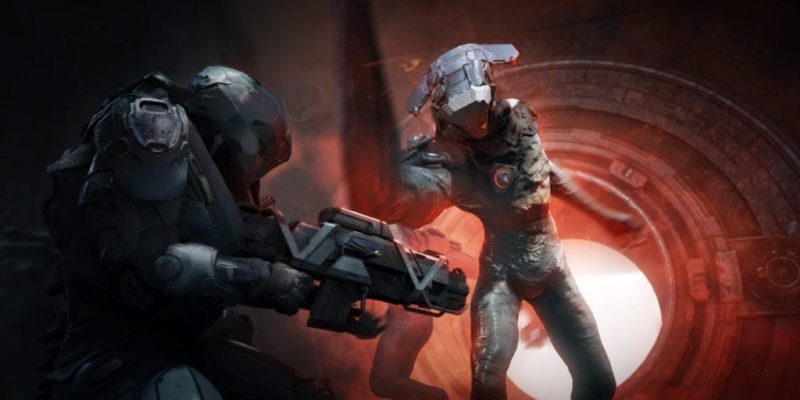 Anthem, described as “an energy source of pure creation,” is both a valuable resource and the cause of the planet’s destruction. In fact, the only way to survive outside the walled cities of this planet, devastated by violent storms and mutations, is to use flying armor suits called javelins. These suits are also equipped with an array of weapons and gadgets to battle enemies and help humanity survive.

In the first Anthem developer diary leading up the game’s launch on February 22, BioWare lays out the setting and how players can explore it by upgrading their javelins.

There are four javelin types in total. The Colossus offers heavy armor and firepower while The Interceptor is built for speed to make hit-and-run attacks. Meanwhile, The Storm is a light javelin with elemental abilities. Those looking for a well-rounded armor that can do a little of everything should look to flying around in a Ranger. Players will be free to switch between different javelins as needed.

Each javelin comes equipped with two offensive gear slots, one piece of support gear, six components, and two weapons. The equipment adds up to an overall gear score, which determines how powerful the armor is.

As expected, Anthem players will be to able to find and equip more powerful gear as they level up by defeating enemies and completing missions. Players can craft gear after picking up blueprints. They can also use blueprints to re-craft gear they have outgrown, but with new power stats.

Beyond the functional upgrades, players are free to customize their javelins with unique paint jobs. There are two parts to changing the look of the armor: paint and materials. The paint is just color, while the materials add texture to them. For example, you can make javelins look like they have leathery or canvas parts. Each armor has six different points that you can customize.

Lastly, players can personalize their javelins with up to five animations, including victory poses, emotes, and arrival animations.