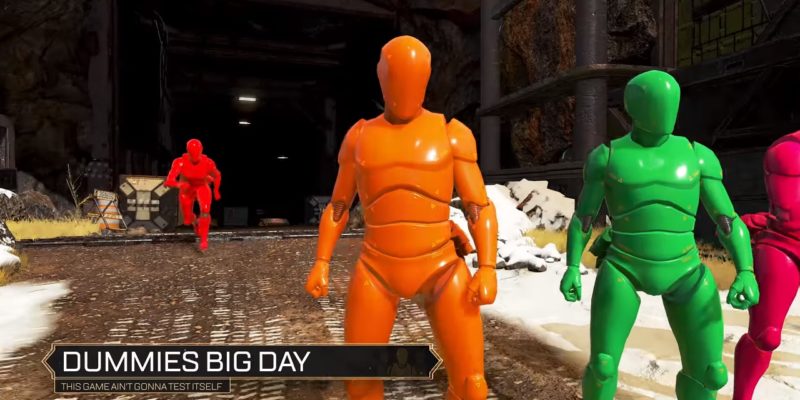 Respawn Development announced that Apex Legends will have a September Soiree event. The purpose of the event is to celebrate fan favorite modes from previous events. Also, there will be a new limited time mode introduced throughout the month of September. The first limited time game mode to return was the Apex Legends Dummies Big Day. However, just hours after the game mode released, the developers had to take it down. The Dummies Big Day mode was first introduced in January. It was a part of the Grand Soiree event, which put a variety of limited time modes on a quick rotation. This time, each game mode is expected to last for a week.

The party has to be paused for now

The Dummies Big Day mode provided a unique experience for Apex Legends players. Instead of selecting a Legend, you choose one of the dummies from the firing range. As they all have the same abilities, the mode focuses on gun skill, rather than how well you can use a Legend’s abilities. A comical aspect that fans enjoy is simply being able to run around the place as a dummy.

Unfortunately, fans were not able to play the popular game mode as long as promised. In a tweet via the Apex Legends Twitter account, the developer announced that the game mode would be paused, due to a bug that caused servers to crash when a player was AFK on the character selection screen.

We're hitting pause on the party. After DUMMIES Big Day went live, we discovered a bug that caused server crashes if a player AFKed on character select. For the health of the game and our players, we're turning it off and working on a fix with details to come as we have them.

It has not yet being announced when fans of the Apex Legends Dummies Big Day should expect the game mode to return. As the developers are working on a fix, hopefully players will be informed soon. Perhaps, the delay will impact the scheduling of the September Soiree. Fans could still have a chance to play the game mode for a week once a fix is rolled out.

Call of Duty: Warzone — The no recoil Kilo 141 build