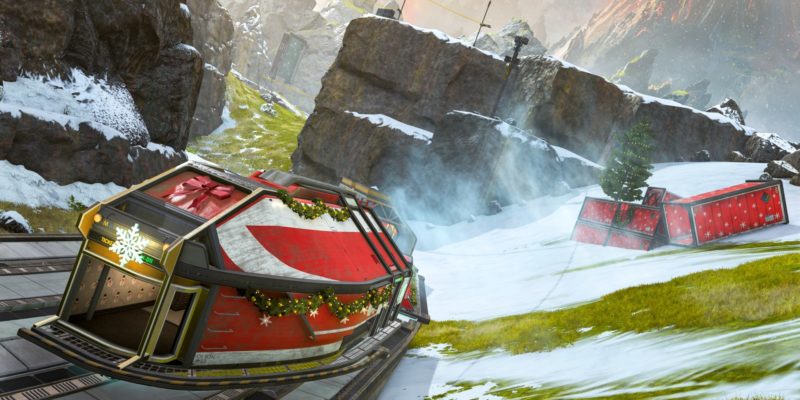 The Apex Legends Holo-Day Bash 2020 is well underway. The limited time mode which takes place on the World’s Edge map sees three teams battle it out for control of the train. Last year, this game mode quickly became a fan-favorite mode and its popularity lives on in Season 7. However, players are encountering a frustrating bug on the iconic Apex Legends train in this game mode.

As the train moves around the map with fans of the game mode on it, players are getting trapped in the various boxes on the train. A clip was shaped on the Apex Legends Reddit page showing the bug in action. As you can see, the player is trapped in the box with no escape. Consequently, they try many methods to escape such as shooting their weapon, using sprays, and deploying their drone. Unfortunately, none of these methods worked. It appears that this issue is becoming more prominent, with increasing numbers of players sharing the same experience in the Holo-Day Bash. One player has reported that jumping onto a box while the train was moving down a slope caused them to glitch inside of the crate.

I got stuck in a box in winter express from apexlegends

Unfortunately, once you glitch inside the crate, the only way out is by leaving the game. Understandably, this is a frustrating bug for you and your teammates to experience. On the other hand, the bug can be frustrating for the enemy team who can not kill you inside of a crate.

When will the Apex Legends crate glitch be fixed?

Respawn Entertainment has yet to respond to this exploit. You can view the bugs that the developers are working on by visiting their official Trello board. Here, you will also notice that another problem with the Holo-Day Bash mode is in the works. This is the issue with getting killed by unintended ways on the Winter Express train. Perhaps, the limited time mode will undergo some improvements in the future.

Zhongli criticisms in Genshin Impact have been answered by miHoYo