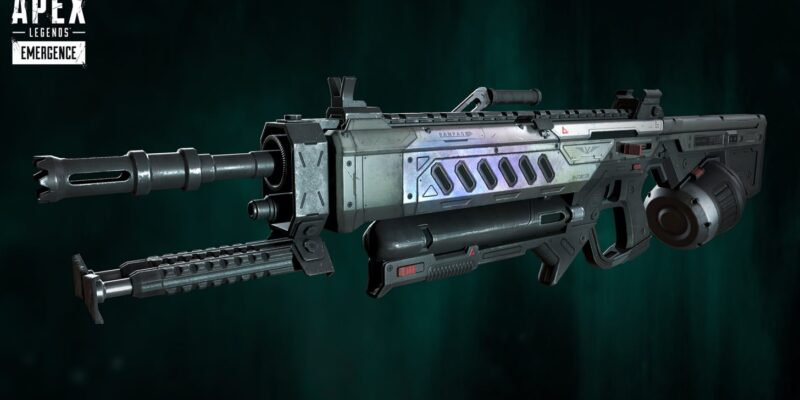 Rampart has been hard at work coming up with new toys for the Legends to kill each other with. Her latest creation, the Rampage, is a Heavy Ammo LMG that has a unique Revved Up mechanic. It’s a weapon that you need to know how to handle in order to get the most out of it. And that’s the aim of this Apex Legends Rampage weapon guide, so let’s get into it.

As for what attachments to put on it, the only real choice you have is the sight. I find the 2x HCOG “Bruiser” and the 3x HCOG “Ranger” to be the best options. You don’t need a 1x sight. If the enemy is that close to you, you’ll want to swap to your other weapon. If you’re playing in an area with longer sightlines, the 2x-4x Variable AOG isn’t a bad option either. Just don’t try spraying when you’re zoomed in at 4x.

The difficulty with spraying the Rampage is its large horizontal recoil. For the early parts of a spray, the weapon drifts a large amount left and right, while also kicking upwards. Once you’ve sprayed for a few seconds, the horizontal drift decreases significantly.

The spray pattern for the Rampage LMG.

With the substantial recoil of the Rampage, I suggest you shoot for the body and don’t try to land headshots. Mid to endgame, it’s only going to require two additional hits to kill an enemy. And, realistically, you’re not going to get more than one or two headshots anyway.

A narrow window of opportunity

The Rampage is advertised as being effective at medium to long-range. I haven’t found that to be accurate. It’s good at medium-range. The damage is solid, and with a bit of effort, you can control the bounce of the recoil. At long range, the slower bullet speed and recoil make it tough to hit anything reliably. And if you’re going to be tapping instead of spraying, you may as well have a Longbow DMR or Scout.

In short-range battles, the Rampage is worse than a lot of other options. Almost all SMGs and Assault Rifles are going to be better. The Revved Up mechanic will increase your rate of fire by about 30%. However, even with this improvement, the LMG is still outperformed by the R-301, Flatline, and R-99. Plus, it takes longer to reload and swap to.

If you want to use the Rampage or find yourself without another option, it’s best used to open a battle from medium range. Take some armor and health off your enemies and then push them with the more reliable Assault Rifle and SMG options. It’s also good at finishing off enemies who are trying to flee.

Let’s talk about the Rampage’s Revved Up mechanic. You can stuff a Thermite Grenade into the gun to increase its rate of fire from 300 rounds per minute to 390. That’s a significant increase. It takes four seconds to load the grenade, so you need to make sure you do it well before a fight breaks out. As I mentioned above, the Rampage is best used to initiate a fight. The best time to get Revved Up is right after you spot enemies or hear gunshots nearby.

I’m not a fan of mechanics that require you to preload something into your weapon to make it work better. It feels clunky. However, the boosted fire rate of Revved Up for the Rampage does last for 90 seconds. That should give you plenty of time to work with. Just remember that the timer will lose two seconds every time you take a shot.

Revved Up lasted long enough for me to spot enemies, use my Ultimate, and get above them.

Thermites make the Rampage better. Naturally, you should carry only Thermite Grenades while using the weapon. I like to hang on to about three. If your backpack is full and you come across another Thermite Grenade, load one into your Rampage and pick up the spare. In Apex Legends, 90 seconds is enough time to find yourself sucked into a battle.

I’ll end this guide by recommending that you don’t use the Rampage in Apex Legends right now. It’s only reliable at medium-range. And, whenever I am using it, I always find myself wishing I had a sniper to be able to hit enemies further away more consistently or another close-range weapon to swap to in short-range engagements. However, if you’re running the Rampage, just remember the tips from this guide and you’ll be on your way to some more victories in Apex Legends.

With Season 10 underway, we’re updating our guides and features hub for Apex Legends. Make sure you check it out for tips on all of the new content. We already have a guide for the new Legend, Seer. Plus, we’ve given the reworked World’s Edge a good look and have some pointers to help you plot your course around the updated map.