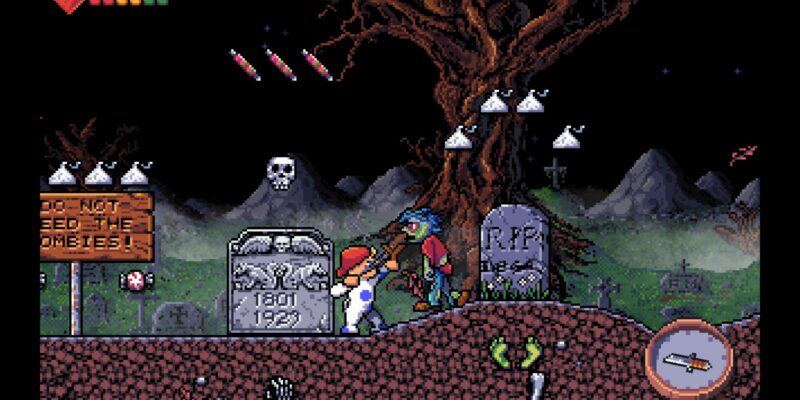 A few months ago, publisher Apogee Entertainment released Secret Agent HD on Steam without any prior announcement. Stealth announcements like this rarely happen, but they almost always come as a nice surprise, especially for players who constantly look out for new games to try. As it turns out, Apogee Entertainment still has more surprises in store. The publisher just announced that Monster Bash HD, an updated rerelease of the classic 1990s side-scroller on DOS, has just come to Steam as part of its Halloween Sale. The original version of Monster Bash came out on GOG.com around seven years before this remaster.

According to a press release, Monster Bash HD recreates “one of the most challenging games of its time” and retains the original’s 28 stages “full of witches, zombies, demons, and puzzles.” Players take control of Johnny Dash as they “venture into the Underworld to rescue kidnapped pets from the villainous Count Chuck.” To succeed in Monster Bash, players must “fend off creepies with a slingshot, save [their] beloved dog Tex, and wake Johnny from this nightmare.”

What does Monster Bash HD add?

Unsurprisingly, Monster Bash HD boasts a fair amount of added features and visual upgrades from the original release. Players can enjoy “new environmental effects, smoother and improved gameplay, and support for modern resolutions,” as well as “brand-new secrets and hidden achievements in fan-favorite levels.” Dedicated players can compete with one another in the newly-added online leaderboards, and the creative types out there can even utilize a brand new level editor and attempt to “make an even better game.” Additionally, players now have access to multiple difficulty options so that they can tailor the experience to their liking.

Much like with Secret Agent HD before it, fans of classic DOS games will likely appreciate the stealth addition of Monster Bash HD onto Steam. Those who want to trek through its spooky stages can purchase the game for $7.49 USD until November 5, at which point it will revert to its base price of $9.99 USD.

Prince of Persia: The Sands of Time Remake is still in development, aiming for 2022-23 release